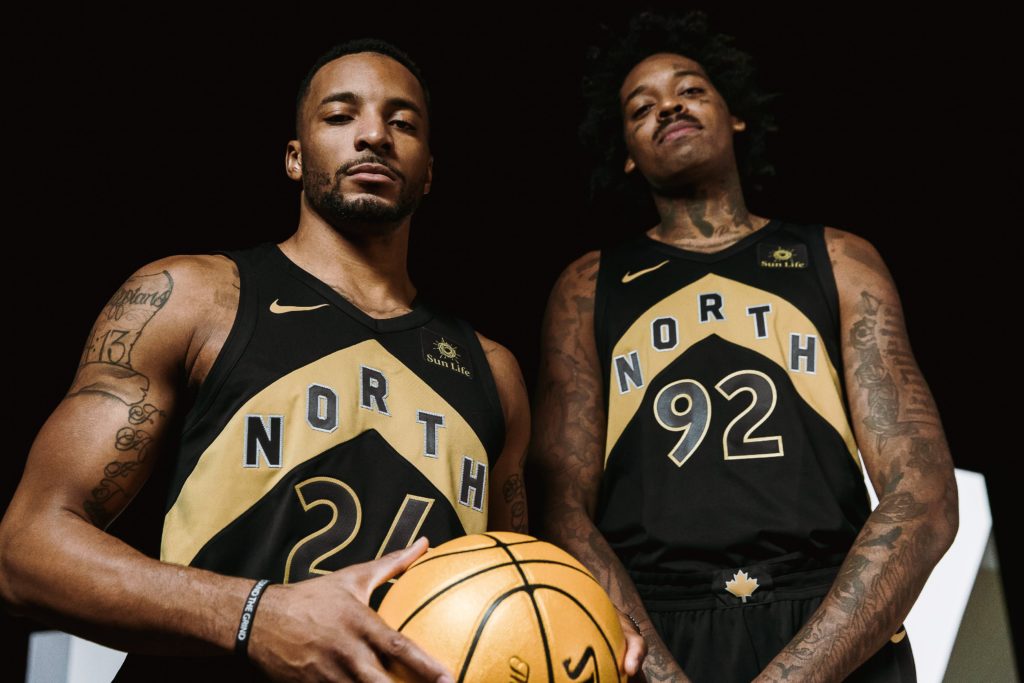 Better late and sharp to the party than never looking fly.

Sometimes in the streets of Toronto you just have to wait for a good thing. Like that CN Tower forever in the distance drive from Pearson Airport to the downtown dot. Or waiting for a table and menu for something good to eat at Jack Astor’s on any given night. But Drake always delivers from serving up playlist picks to albums that offer ‘VIEWS’ that honour the great city of the six. So you know if you’re reading this it’s never really too late.

Now after Nike just gave us ‘Association’, ‘Icon’ and real ‘Statement’ jerseys for the new season where they are now the official uniform supplier of this National Basketball Association the ‘City’ line is complete like riding a Matt Bonner tram from King Street West to the Air Canada Center. As Toronto didn’t want to be left out like Kyrie Irving didn’t want to be the next Dwyane Wade. Now the only one rocking sleeves like Adidas is Lakers rook Lonzo again, looking to ball like his UCLA alumni days. Forget Christmas Day, unless you’re rocking Sixers script. As for the 6, the new Toronto Raptors jerseys that go back to black like the late, great Amy Winehouse with Octobers Very Own gold, couldn’t be more Drake or OVO if they had that Owl hooting from the shooting shorts. And you know these third blackouts will be a permanent fixture on ‘Drake Nights’ when the Raps court will be decked out in the black gold same lining.

But these new duds that All-Star ‘Step Brothers’ DeMar DeRozan and Kyle Lowry will rock like Will Ferrell and John C. Reilly did ugly sweater vests are less ‘Hotline Bling’ and more for the town he calls his own for the citizens of Toronto. ‘They The North’ and have that in six court copying chevrons that in glittering gold, road point to this very Canadian NBA destination. Do you see. And if you don’t know, now you know…player.

This is B.I.G. for the notorious north OVO town of the six. We’ve had the ATL neon, Boston parquet, Lakers Black Mamba snakeskin, Cleveland Land, Detroit ‘Motor City’ industry, New York’s F.D.N.Y. department, the Suns not losing the ‘Los’ love and Chicago’s classic city edition. But nothing for the homestand looks as good as this to the T-Dot.

And with all six signs pointing north to Toronto, we only wish these Raptors threads could be put on for the city every night.

Now the only ‘Fallen Kingdom’ in this Jurassic World will be found in cinemas with Chris Pratt, Bryce Dallas Howard and Jeff Goldblum this summer season Blue.

It took a minute for the sap to meet the tree but the Raptors and the Toronto city they call home are far from extinct.

Advertisement. Scroll to continue reading.
In this article:City Edition, Drake, Featured, Nike, OVO, The 6, Toronto Raptors, We The North