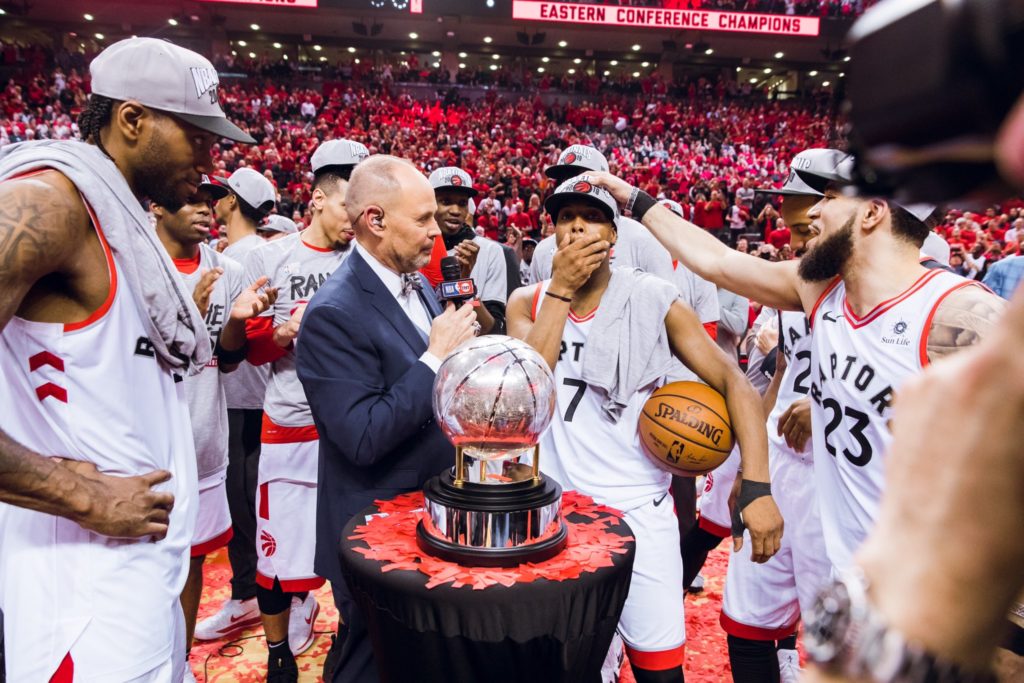 Extinct in Six? Like we said in my last article about the ‘Jurassic Park’ crowd of fans outside…NAH! The 6 just took the Eastern Conference Finals and Championship in that many games.

There will be no Game 7.

They the North are heading to the NBA Finals.

And it’s not only the first time Toronto have done it’s since their 1995 expansion inception into the North American league. It’s the first time Canada will be represented in the NBA Finals for this lands chance to be the first country outside those United States to win an NBA Championship.

And we believe this BasketballBuzz.

Even against the dynasty Goliath of Kevin Durant, Steph Curry, Klay Thompson and Draymond Green’s Warriors. Cinderella stories are always better to the glass slipper. Get ready for this Raptor to roar.

Greek warrior heart Giannis Antetokounmpo had to walk out of his postgame presser because of this epic emotion. Kawhi Leonard even bigger than his been around the world and I, I, back to Canada rim rattling series beater against the Sixers, made an even bigger play for MVP of this whole country. Let alone the season, even if the NBA end up giving it to James Harden now when they should really spell it out for the alphabet. Everyone watched Kyle Lowry as he glowed tears of joy with his kid wrapped in his arms. His hand across his mouth face above says it all. Jeremy Lin couldn’t believe the Linsanity. And Drake’s plans seemed forever placed on the blazer shoulders of Coach Nick Nurse (or the Bucks Bud in hilarious meme trolling) who nursed Canada to their first NBA Finals as center Marc Gasol beating his injured brothers team (a Spanish showdown we wish we could have seen) gave it up for his former Memphis teammates on Twitter, taking them with him to the Finals as the grit and grind of the Grizzlies account responded in timeline kind.

In 2016 after their 20 year anniversary in the association, Toronto held the first NBA All Star Game in a league of its own. Two decades after being the only National Basketball Association franchise in Canada after those Grizzly bears of Vancouver (bring their franchise back) led by Marc’s big brother Pau Gasol made that Blue Suede Shoe Elvis move to Memphis. Twenty plus years later and now the King of Canada. Two decades since those Barney purple dino jerseys went from a laughing one to Mitchell and Ness hardwood classic throwback, out of stock. Twenty plus years since country cousins Tracy McGrady and the Air Canada of Vince Carter threw the legs and straight in the honey pot started something way above the rim. Two decades since Chris Bosh almost led the most completely fun and love to run team in the league at that time aside from Steve Nash’s Phoenix Suns, missing only their countryman making a point (how good would that have been? Almost as good as getting Carter back next season for one last dance and dunk. Make it happen Basketball God’s of the 6). Twenty plus years since Drake started rapping from the bottom of his basement.

And almost 25 years and seasons, 82 games, three rounds, six games, four quarters and an 100-94 win behind a double, 27 and 17 double from their leader Kawhi Leonard later and we’re here. Just like we hope our number 2, number one will always be.

Check out the views from Yonge Street on fire with fans celebrating peacefully and beautifully. Nothing was the same. And nothing ever will be again.

This is for them. Us. You. Me. Him. Her. The whole city. The entire country and the watching world that call themselves the North. 6 before Game 7 with that many left to try and Dub themselves Canadian champions over a whole dynasty heading for a parade across the Golden State of the Golden Gate Bridge to San Francisco. This is for the Bucks too and their champion leader Giannis. Afforded as more than a worthy opponent but their own legendary legacy of the future. This is for a young man who at 21 years old moved to Toronto to start a Basketball writing dream. That man is me. But more than that. This is for the pride of Angola, Edilson Silva who had a vision to start Canada’s first Basketball magazine. This is for every fan in Toronto, Canada and the North that will always be theirs.

Now read all about it, the Toronto Raptors and Canada are heading to the NBA Finals.

Next stop beat the Bay.

The North will find a way.

T.O. Canada this is your time.