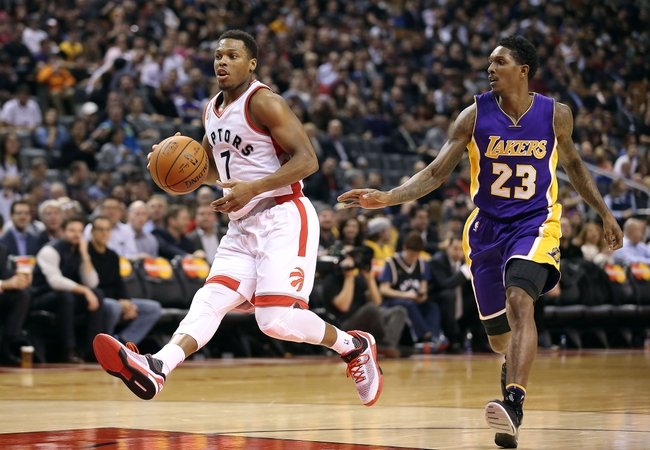 Raptors Turn Lakers Upside Down In The 6

6 flags were waving everywhere like theme parks in Orlando last night as the Los Angeles Lakers headed up north from the best coast to play the Raptors in Toronto. But the Lake Show was stopped before they even had time to make port at Lake Ontario, let alone leave the visitors locker room. Leaving the team that came into this city 10 and 10 looking more like a 9 now after they put the Lakers road uni on a spin cycle and rinsed them.

Staying at home for such a long stand that they may as well be fossilized, the Raptors did the same to their opponent as Kyle Lowry took the lead again (like the Philly native started this week in the 6 against the Sixers) with 24 points, as Mr. Toronto, DeMar DeRozan had 16 rolling with his woes, passing Air Canada legend Vince Carter (who was in the house Wednesday as the Raps beat the former Vancouver Grizzlies for a dual Canadian homecoming reunion) for second in the franchises all-time field goal leaders after the man in the middle of these two, Chris Bosh. Making it extremely hard for this team in desperate need of a big or a 4 in the 6 (an unhappy DeMarcus Cousins before he reunites with his Kentucky ‘cat Wall anyone?) to part with one of these wings. Which all past, right now and future told looks like the only way these Raps can clip the Cavs.

They had no trouble clawing the young Lakers however as these Jurassic Raptors cooked up more heat and hell than Curry’s cooking and Harden’s chef bowl behind the hot plate. Alley-oops were on the menu as were Basketball Buzz catching one last game in the home of Canadian basketball this week.

The Lakers had no ice or swag in their veins last night as the Most Improved and Six Man of the Year candidate Nick Young joined sophomore leader D’Angelo Russell and D-Fender Ivica Zubac on the inactive list. These are two big players with equal contributions too many to be without. Especially as Julius Randle and a still all air dunking Larry Nance Jr. couldn’t get it going quite like they or the Lakers would have liked. As Toronto’s block party had more in the Lakers way like the cities rising number of condos.

Even former, well received Raptors Lou Williams and Jose Calderon couldn’t shoot the ACC lights out like they are accustomed to, leaving it up to the heart of Jordan Clarkson (and what should have been more time for the unlimited skill of Marcelo Huertas) to take it to the rack and shoot for broke. It was a big night for B.I. though. As rookie Brandon Ingram was no longer put to the back, showing strength as he hit a season and therefore career high 17, as the teenager showed he was ready to grow and put up twenty-something numbers.

But the Lakers just couldn’t break an early blowout 20 point advantage like a Five Guys peanut that turned into a 113-80 rout and pizza. Thanks to a big dunking 16 from Norm Powell and 14 from Mr. Six and Captain Canada Cory Joseph. Sure it wasn’t a Warrior thrashing, but it was still the gold like Octobers Very Own’s black alternatives trim.

The throwback Toronto Huskies would have been proud, the Raptors treated the former Minneapolis team like their old wolf logo without losing breath, leaving them blue in the Canadian cold.

Winter even comes to California.

In this article:Featured, Lakers, NBA, Raptors