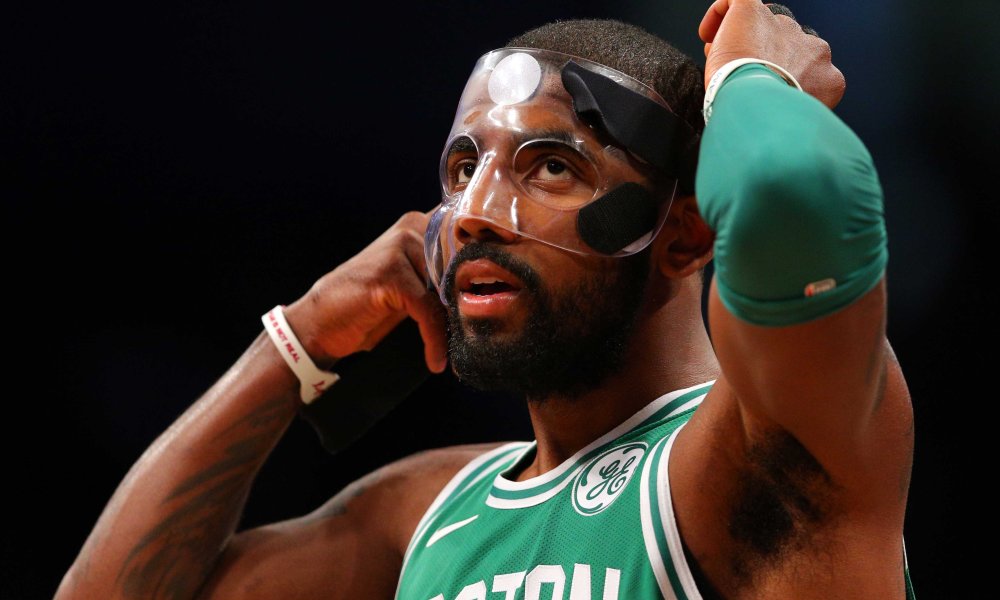 Somebody Stop The Mask Of Kyrie Irving

Even that phrase delivered at a perfect Jim Carrey pitch can’t quite put into perspective just how hot Celtic Kyrie Irving is right now. Especially in the Boston green, Rip Hamilton face-mask.

Maybe those three little letters would do more justice for this league leader?

Kyrie joins Kobe, former Cleveland Cavalier teammate LeBron James and the man whose about to pass him the Maurice Poldoff torch, Russell Westbrook to be an absolute menace in the Phantom of the Opera face-mask, leaving other teams dead on basketballs biggest stage. He may have fractured and broken some bones in his face, but that won’t stop him as he fractures and breaks the backs and hearts of the faces of all the other franchises he faces off with night after excruciating night.

Those who used to say it must be the shoes (and have you seen his best in show sneaker designs complete with shamrocks like Starbucks on St Patrick’s Day this season heads? Those halloween pumpkin ones were the spice), are now saying it must be the mask.

Sure the plastic profile guard makes for some meme worthy Pinterest fan art appreciation but this guard has made a point at hating it…the sweat inducing mask that is, not the love. These kind of covers can blind you, but like the concussed legend of Celtic great Larry, letting it fly like a Bird above the baskets in the Boston Garden all the way to the rafters (as he saw too hoops like 80’s girls earrings and just aimed for the top one), Kyrie plays through all the pain and frustration. Taking it out on the ball (like opponents on Lakers rookie Lonzo) and the other teams hoops that to him seem bigger than those ones Bruno Mars sang about.

Take Dallas for example. Irving just masked all his pain by taking the Mavericks for 47 points, 3 rebounds and 6 assists in the last contest that took the Celtics to a sweet sixteen straight. After dropping two games following Gordon Hayward dropping out of the new season before the second quarter of his opening game one even played out, everyone was calling time on these new Celtics as soon as Gordon turned his ankle counter-clockwise. But now one of the best in the association Kyrie is showing LeBron and them he’s just as good as them or anyone alone like this man from down under always wanted to prove. This definition of clutch, who leaves everyone else in the fourth with straws has already shown on a championship scale against Curry of all hot guards that he can take the last shot that really matters. Now forget the Most Valuable Player award for a waning second or even the time his dynamic duo partner in pine Hayward comes back, Irving has the power to dribble drive all the way to the crown on his own.

And it’s going to take more than a mask to stop him.