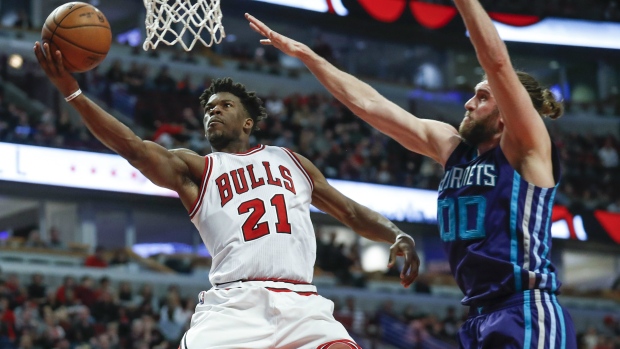 The Butler Did It All Last Night For Chicago

Servicing Chicago last night like your car waxed, polished and shampooed all the way to the leather interior, Jimmy Butler lead the Bulls to a late charge that took the sting out of the Hornets by buzzers end.

Kicking the North Carolina nest back in his United Center home hive, Jimmy’s Bulls escaped Charlotte’s web 118-111 in a thriller that saw Butler get more than buckets as per his nickname.

His career pushing 52 points were joined in the box score by a double, double of 12 rebounds to go along with 6 assists and 3 steals as the Bulls’ alpha Jimmy Butler took flight and was all over the Chi-town home floor like Milwaukee’s Greek Freak alphabet. Putting up Giannis Antetokounmpo statistics that both leading MVPs James Harden of the Houston Rockets and former Oklahoma City Thunder teammate Russell Westbrook would be jealous of…let alone proud of.

Jimmy Butler was the Alfred to Chicago’s Batman after many dark nights in the town that was once Gotham City. Despite having a bolstered backcourt of free agent legendary big-name signings, Rajon Rondo and hometown boy Dwayne Wade. Not to mention one of last years top college choices in rookie pick Denzel Valentine in reserve. Despite all this in the Chi-city fences, there’s been little to love with all the recent stormy weather in the Windy City this Winter in Chicago’s recent fall.

He may have been one off his career high but Butler matched 20 points in the first two quarters with a ‘Where Amazing Happens’ 14 in the final four of the fourth. The Bulls brethren needed it too as former G.O.A.T player Michael Jordan’s Charlotte Hornets owned an Air apparant of their own in Kemba Walker. A Nike flagship player who needs a lot more ticks from the leagues powers that be before he looks for the kind of respect that comes from the kind of swoosh sounds made by the type of owners that write bigger cheques.

Nobody could check Kemba apart from Butler as Walker shimmied like another Chicago legend called Antoine. His 34 points and 11 rebounds definitly reached All-Star status so you know where to punch your ballot for New Orleans now. Just make sure you put a super in front of both stars names as these Marvels shone and made these four periods as classic and celebratory as the French Quarter at Maris Gras. The next time these two top scorers meet they will probably be suiting up together in Louisiana.

Nicolas Batum gave Charlotte 19 points, 6 rebounds and five assists too as Jeremy Lamb added 15 off the bench. Whilst for Chicago new Bull boy Michael Carter-Williams starred with 10 points, 9 rebounds and a clutch two with two to go as disgruntled Rajon Rondo looked at his trade options from the bench following another DNP-CD which might lead to another roster for the top but troubled Point Guard.

Last night though for Chicago it was all about Butler as his silver service hit gold. When it comes to number 21…it’s over!