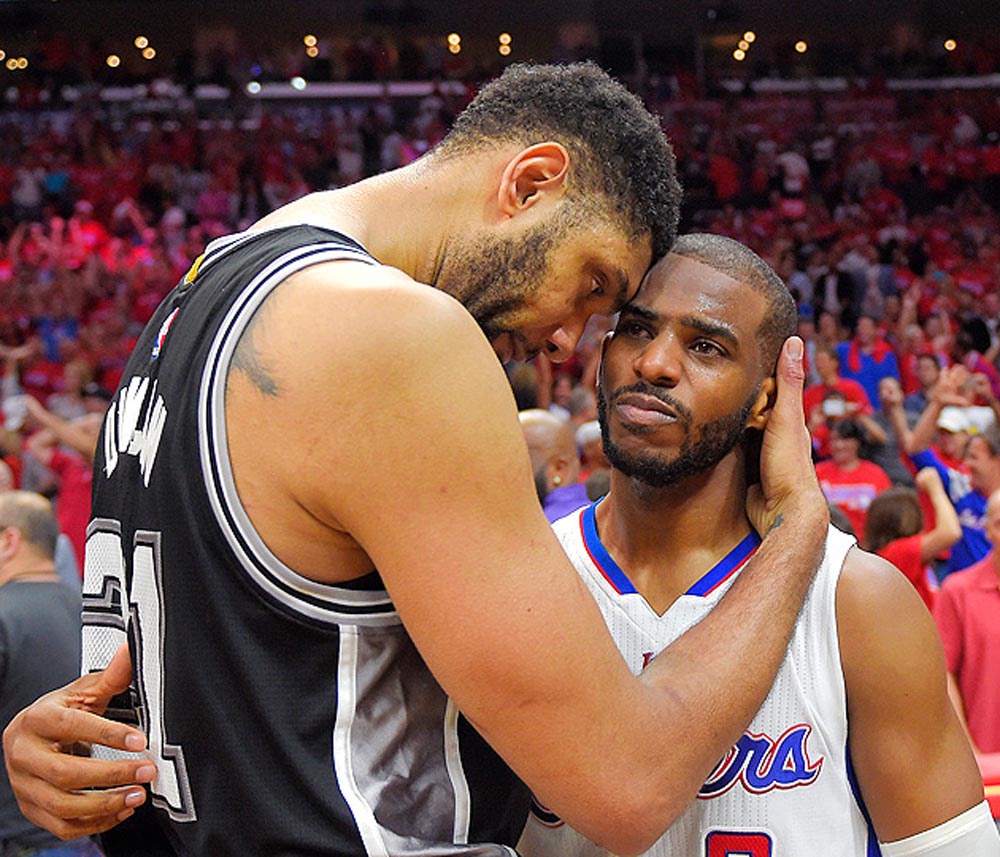 The Champ Knocked Out This Weekend As Los Angeles Clips Spurs

Mayweather vs Pacquiao! Forget about it! Last night saw another sport heavyweight K.O. bigger than the fact that Floyd earns more in one fight night than most ball players do in a season.

Because now we’re going to have a new NBA champion this year.

Now the Clippers who have also replaced the Lakers as a top-flight, Spur contending, beating team too have a shot at their own Hollywood moment.

Sure the Spurs still have a battle tested and war ready big-three in Duncan, Parker and Ginobili to go along with last years Finals MVP and this years ‘Defensive Player Of The Year’ Kawhi Leonard. But as old are still giving way to new for the Texan trio, there seems to be some Wild West dust on the Spurs gold this year.

As the Clips showed true grit with an 111-109 final draw in this first round showdown, the Spurs repeated the same early exit of the last time they where defending champions. Following their 2007 championship that saw them lose in the first round to neighbors Dallas Mavericks in 2008.

The curse of a hangover headache, now coach Popovich wants a change to the series seeded process in the playoffs.

Still in this epic duel of old hands and classic coaches featuring Pop and Doc, Rivers ran like Holliday, showing San An the tombstone. Young just beat old as time ran out. Too much young legs for old horses. Too much ‘Clutch Paul’ as CP went for three and left everyone looking like ‘O’. Too much Blake Griffin dunking with Incredible Hulk rage in this Age Of Ultron. And too much Jordan vengeance, as ‘Andre went all 3000 showing Leonard et al that D should be given a ‘Defensive Player Of The Year’ nod, just like he showed the rest of the league that he should have been an All-Star this year.

In the end the Spurs just ran out of bullets in the contenders chamber.

Dropping San Antonio like a gavel, Paul banked a win over Duncan, beating the robot on a play even with an over strung hamstring. As he passed the 39 year old greatest Power Forward of all-time, the Point God’s coach dubbed this kid a “street fighter” as this video game epic contest came to a curtain call close.

Even big Dunc called it “amazing to watch”, even though he wished he wasn’t on the receiving viewers end like the millions not watching the “other” big fight on T.V.

After Paul and Timmy’s equal billing of 27 points it was up to defensive dog Matt Barnes to knock an in-bounds pass into the Staples Centre crowd that went euphoric as soon as the final buzzer tolled. A cheerful crowd led by famous fan and season ticket holder, comedy actor Billy Crystal who has become close with Paul over the years of the changing of the guard.

Now the former joke Clippers are now no act in Los Angeles as they reach the Western semis for the fourth time in franchise history. A history they are rewriting in the former Staple of Lakerland for their own banner and rafter worthy moments.

As for the Spurs. These old dogs will be back when they learn some new tricks. Still L.A. hasn’t escaped the Texan triangle just yet. Next is the Harden Rockets out in Houston, which looks to be a problem.

The talk of the towns barbershops is now the Clippers who in a hairs difference have gone from former champions to potential MVP’s in these contests and if they hope to be ones themselves they’ll have to soar past the Rockets if they want to battle with the likes of the Warriors and all the other NBA favorites.