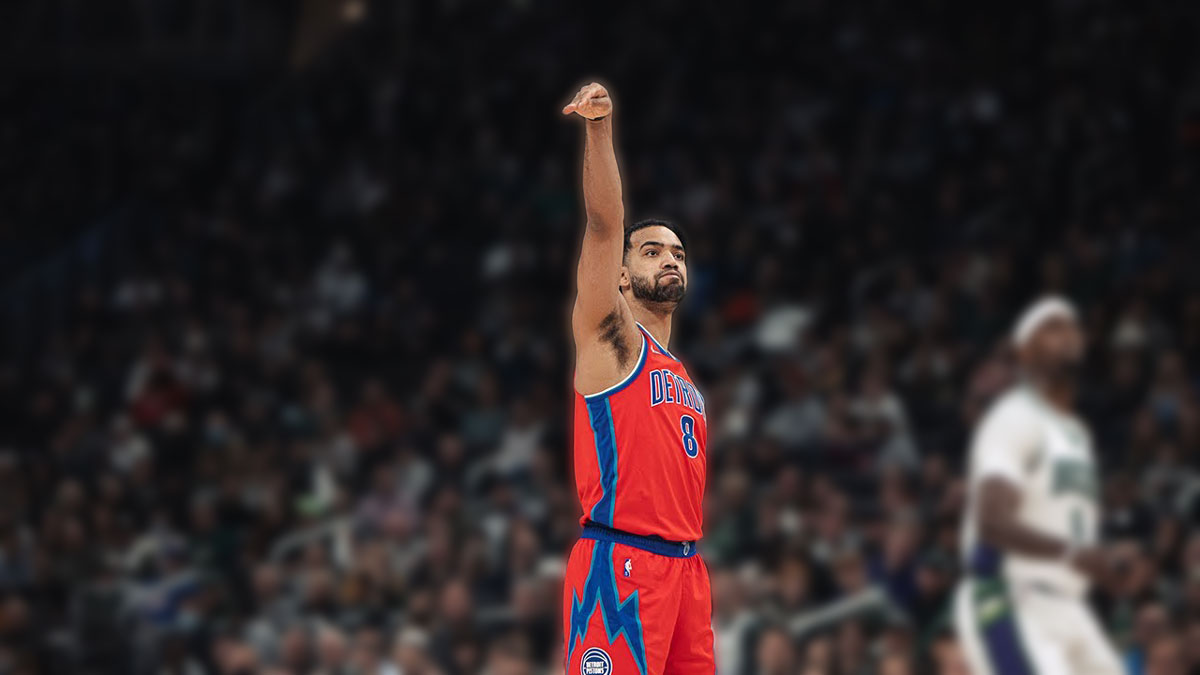 “Nowadays, everybody wanna talk like they got somethin’ to say, but nothin’ comes out when they move their lips, just a bunch of gibberish.” And mofos act like they forgot about Trey.

“The main thing for him is that he has to think and understand that he’s a dominant player. He has to think that he can dominate every possession.” Tom Lyles, the father of Trey, said during our phone interview in the fall of 2014.

Eight-years later, it seems like his son has finally transcoded and encoded the message. Now in his seventh NBA season, the Saskatoon-born, Indianapolis-raised basketball thoroughbred is having the best season of his career with the Detroit Pistons.

Lyles, a first-round, lottery selection of the Utah Jazz, 12th overall in the 2015 NBA Draft, spent two seasons with the Jazz and has bounced around the league with stops in Denver and in San Antonio, but it seems like he has found a home in Detroit like Marshall Mathers.

The 26-year-old, six-foot-ten versatile forward is putting up double-figures scoring numbers for the first time in his NBA career, contributing 10.1 points, 4.7 rebounds and 1.1 assists in 19.5 minutes. Lyles is coming off of his the best offensive month, elevating his play to 14.1 points, 4.9 rebounds in fifteen (15) games in January 2022. The rebuilding Pistons registered six (6) of their twelve (12) overall wins in the month under former Raptors head coach Dwane Casey.

Lyles gifted himself an early Christmas present with a career-high 28 points in a close 115-112 lose to the Miami Heat on December 23rd, 2021.

Furthermore, since December 21st of last year, Lyles has become the Pistons’ third-leading scorer behind Saddiq Bey and 2021 No. 1 overall pick Cade Cunningham with 14.9 points (4.6 – 9.9 attempts) on 46.6% percent shooting.

Undoubtedly, Lyles return to the national program following an eight-year absence and debut with Canada’s senior men’s national team in the summer of 2021 helped the Canadian regain his confidence and better prepared him for the current, ongoing NBA season.

In three games with the national team, Lyles was consistent, contributing 9.7 points, 6.7 rebounds, 1.3 assists against Greece, China and the Czech Republic at the 2020 FIBA Olympic Qualifying Tournament (OQT) in Victoria, British Columbia.

“It’s a different type of relationship with these guys, these coaches. I’m able to be more of myself and who I actually am.” discussed Lyles in a recent interview.

A former 2014 McDonalds All-American, Lyles was one of the hottest Canadian basketball prospects not named Andrew Wiggins. The lethal duo teamed-up to give Canadians a glimpse of the future at the 2012 FIBA U18 Americas Championship, helping Canada qualify for the 2013 U19 FIBA World Cup. Both finished in the top ten in scoring, with Wiggins recording 15.2 points per game and Lyles not far behind at 13.6 for the tournament.

A year later, Lyles return to the national youth side, this time without Wiggins, but alongside a highly touted point-guard in Tyler Ennis. The new formidable duo led Canada to a quarter-finals matchup against a stacked United States team that dominated the competition with current NBA players Montrezl Harrell (Washington Wizards), Marcus Smart (Boston Celtics), Aaron Gordon (Denver Nuggets), Elfrid Payton (Phoenix Suns) and others.

Unavailable for the tilt against the USA due to an injury, Lyles was forced to watch from the sidelines as Canada fell to their rivals 109-67 and finished sixth overall in the 16-team tournament. Ennis finished as the top scorer at 20.9 points per game, with Lyles right behind him at 20.3 in seven games.

Their cumulative averages rank as the top five best performances by a Canadian at a FIBA U19 World Cup, with only Devoe Joseph’s 22.6 in 2007 and RJ Barrett’s 21.6 points per game in 2017, posting better numbers.

As a high school freshman out of Arsenal Technical and an ESPN top-five ranked prospect, Lyles originally committed to the Indiana Hoosiers in September 2010. Two-years later and feeling the pressure of his new-found success, Lyles re-opened his recruitment, eventually selecting the Kentucky Wildcats over the Louisville Cardinals.

Despite an up-and-down freshman season (8.6 PPG, 5.2 RPG) and sharing the court with the likes of Devin Booker (Phoenix Suns) and Karl Anthony-Towns (Minnesota Timberwolves), one-year under the close eye of head coach John Calipari was all the 2014 Indiana Mr. Basketball needed.

A deep 2015 NCAA Final Four run in his own backyard of Indianapolis helped refine parts of his game, leading to his NBA lottery selection with the Jazz later that summer.

The Pistons currently boast a record three Canadian-born basketball players on their roster, including Cory Joseph and Kelly Olynyk. As per the 2021-22 BasketballBuzz NBA stats tracker, Lyles is one of ten Canadian players currently averaging double-figures scoring.

With 33 games remaining in the 2021-22 NBA season and with the Pistons clearly out of playoff contention, the 2023 unrestricted free-agent is expected to continue to have plenty of opportunities to showcase his unique talent.

At six-foot-ten, Lyles has the ability to stretch the floor, knock down mid-range jumpers and the occasional triple, making his skill-set highly demandable. Expect plenty of suitors knocking at the door looking to lock-up and sign the Canadian to a lucrative long-term deal.