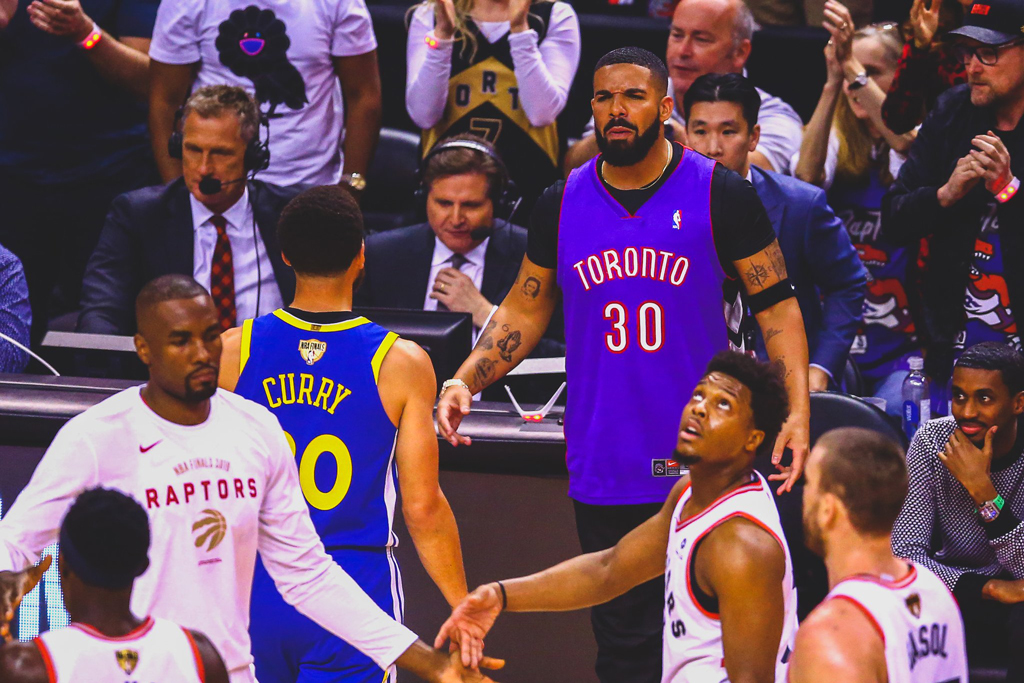 Hold on, we’re winning at home.

Drake and every other Raptor fan in the 6 partied until 5AM in Toronto last night as We The North won Game 1 of the 2019 NBA Finals over the dynasty of the double reigning NBA Champions the Golden State Warriors.

That’s what the David of Sixer legend Allen Iverson told his Philadelphia faithful after stepping over Tyronn Lue and the three-point, Goliath dynasty of the Shaq and Kobe Lakers in 2001 and winning Game 1 of their NBA Finals. After a beast of an East campaign that just saw him run over and stop the Bucks of all franchises in NBA legend.

And history looks to repeat itself with a twist this year as everyone in North America bar three States is rooting for this underdog or dino of the Raptors to Klaw back against the Dubs dynasty (if only they voted like this against Trump) with arguably the greatest player of the association Kawhi Leonard on their side.

Kevin Durant or not.

DeMarcus Cousins or not.

Boogie may have been down for Game One but that hardly mattered as these Raps wrapped the game up 118-109 to draw first blood and hopefully last from their teeth like the trailer of Sly Stallone’s new ‘Rambo’ movie. The T-Dot playing Rocky after pushing Philly down the stairs after Leonard’s game winner processed the rim for about a half hour, freaked the Greek of Giannis Antetokounmpo and now they have a chance to win it all for the first time in Canadian history and any National Basketball Association franchise outside the United States.

And We The North believe.

Leonard who has been drawing Jordan comparisons from Coach Doc Rivers’ prescriptions (oh and the NBA fining him 50K for praising Kawhi on an analysis show and calling it “tampering” is ridiculous. Just saying.) had a fitting 23. The same number that Drake hash-tagged on I.G. that Dray should have never worn. But it was Pascal Siakam who was the high man with a reverse 32 for an underrated squad of big names like Lowry, Gasol, Ibaka, Lin and many more who could give these DeMarcus, Durant, Steph Curry, Draymond Green, Klay Thompson and Andre Igudola all NBA team a run for their dynasty. Put your started from the bottom Canadian dollar on it.

But this arena of the NBA Finals is still the Bays area, even if the ScotiaBank isn’t their ideal withdrawal. Steph Curry had 34 points but that was all the chef really had left in the Californian kitchen, as Pascal painted a holy court canvas as all praise was due to the man who almost became a priest before he found his other calling. In the third he was six for six in the 6 and was the dot that underlined the T’s victory over the G.S.W.

But perhaps the most frustrating factor for the invading Warriors to deal with was Canada’s version of Jack Nicholson in Hollywood courtside. Superstar rapper Drake was truly on his worst behaviour last night. A scorpion sting in the Raptors tail. If you though the Bucks had enough of us trolling block or charge then just wait until what the Warriors end up dubbing him after seven or eight games.

Nice for what as look what October’s very own did last night as Toronto finally made it to June this late May after almost a quarter-century 24 years of Vince Carter’s, Chris Bosh’s and DeMar DeRozan’s. After nursing and massaging his coaches shoulders more than Toronto’s team trainer in the last series this season, Drake went from the dry erase play calling to looking like a player or at least the Lou Will unofficial 6 Man. Rocking a jersey and armband like he was down to hoop like no one saw his infamous “Steph Curry” with the shot Kentucky practice viral Vine video.

He was feeling his game however in Steph’s dad Dell Curry’s throwback Toronto jersey from the downtown like Yonge’s days in the dot, co-signed literally by the man himself. He also covered up his number 35 Durant tattoo on his bicep with said Nike armband. Before getting in Draymond Green’s face postgame calling him trash and reacting with a smirking expression that Bleacher Report was spot on for comparing to Daenerys’ forced smile viral meme in this Game Of Thrones about to draw in that HBO viewership.

Those who couldn’t believe it like the Kyle Kuzma looking kid courtside better see it now. We have ourselves a series and THE season in the history of the North. Air Canada to what’s going down on the clawed bones of the hardwood right now. Sure this is so far gone from over and the Golden State Warriors are the dominant dynasty of our moment that will only sort of end after this season as they cross the Golden Gate Bridge to the Silicon Valley of San Francisco. But we still have ourselves more than just one ball game now and as the paddocks of ‘Jurassic Park’ roar with celebration outside, we’re glad it ain’t over until the Canadian rapper sings.

If you’re reading this it’s nowhere near too late.