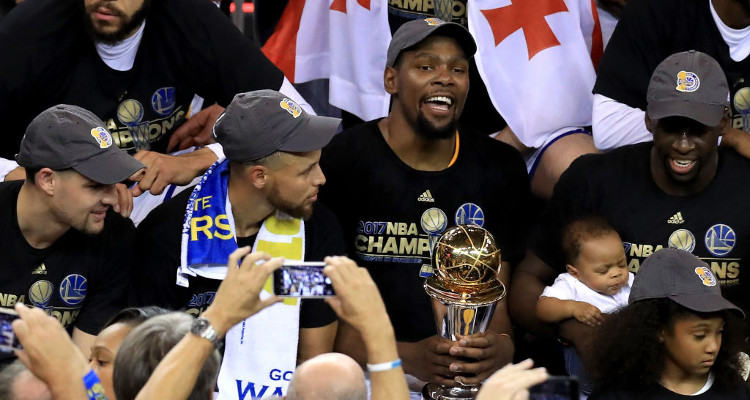 Last night the inevitable was postponed no more as the Golden State Warriors became your 2017 NBA Finals winners and NBA Champs.

Gutting out the final Finals game 129-120, behind 39 points from new free agent decision maker and real Finals MVP Kevin Durant. King LeBron James’ 41 points were not enough as new Splash Brothers Durant and Stephen Curry combined for ‘Bron’s total in the first half alongside their Pacific family of wet shooter Klay Thompson and defensive hound dog Draymond Green. K.D. Trey’s five straight Finals games with 30 points or more was the first time a feat like this was reached since Shaq 17 years ago. As the Dubs matched the year 2000 Lakers Dynasty almost clean record, save one game were the broom failed to collect any dust.

The Sixers Hall Of Famer Allen Iverson was the Game 1 reason back then. But in a Cavalier 137-116 Game 4 that saw Cleveland break Finals three-pointers (24) and scoring in a half (86 points) we almost thought King James’ basketball bible would have another classic closing chapter. But this time they wouldn’t come back from 3-1 down, even defending the land at home in Ohio again in the last game in all black. This time it was there funeral as Tyrone Lue was stepped over again, but this time by a high-kicking, deep-shooting Steph Curry.

No need for anymore ‘Spider-Man: Homecoming’ NBA Finals crossover commercials as the Durantula webbed up the King as the Warriors didn’t want to see him win another one. Besides not much beats running into D.J. Khaled for a photo bombing opp.

Steph, Kevin, Klay, Draymond and Andre Iggy sure sound like they are spelling out a dynasty as the Warriors retained the trophy they lost year, winning this threequel trilogy best of three final contests and turning last years redemption of the King into a revenge of the Warrior, reuniting with the legend of Larry like the way Curry lets it fly like a Bird over the Golden Gate. San Francisco looks like the next move for this Dub Dynasty, but right now across the bridge this is Oakland’s moment as this franchise truly becomes a Golden State again.

Must Read:
Quebec Basketball sweeps 2019 Canadian U15 & U17 National Championships

2015 Finals MVP Igudola added 20 and a fast break jam that put an exclamation on this resolute victory like ‘Bron’s block on him a year before as G.S.W. were firing on all cylinders. But as Kyrie Irving’s 26 combined with James for 67 he couldn’t pull off any clutch heroics to mount a comeback. Neither could Love off the ball who only had 6 points like he was heading to Toronto.

In the end there were too many Warriors for the Cleveland Kingdom, storming these castle walls. And now this Summer how many more soldiers will join these band of brothers?

Westbrook may be your MVP this year, but former OKC teammate Durant with the thunderbolt of Californian reign is the Finals one and a certified champion as the King was made to kneel and kiss the ring.