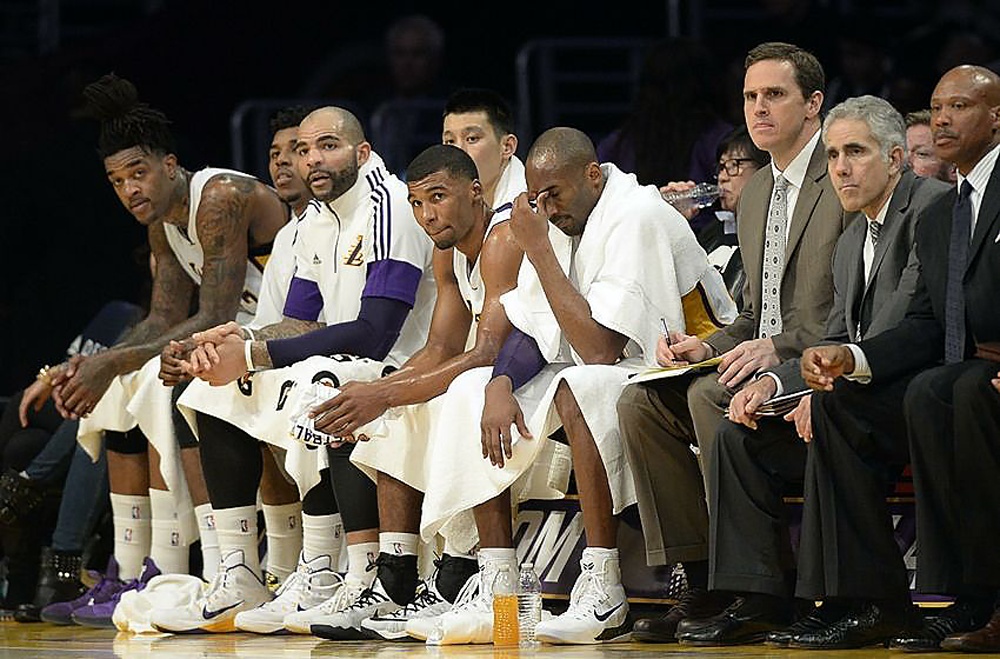 What now for the Los Angeles Lakers?

1949. Since their first NBA Championship, the Los Angeles Lakers have won the league title in every decade running, except the Celtics dominated Sixties and Jordan dominated nineties.

Now in the growing pains problems of the teens, how do the sixteen time champs make the decade they began with the legend of Larry theirs again? To ensure that this time next year in 2016 they’re back on top. Especially after the worst season in franchise history this year.

A season that saw 82 game ending injuries to top rookie Julius Randle and one of their all-time, greatest legends Kobe Bryant. Not to mention a training table list of so many injured players missing time on the pine for Gary Vitti. Including and especially Canadian and Point God icon Steve Nash who was forced into earlier than intended retirement. Even if he is now in his forties.

You’d wonder why after a lottery year like this Coach Byron Scott still had his job and a ticket to ride next time round. But with all due respect to the Showtime legend whose actually making a lasting leader, even the greatest coach would be hard, playbook marker pressed to fix all this mess. I mean just look what the Zen of Phil Jackson and clutch of Derek Fisher have to bite through when it comes to Big Apple, Knick rotten basketball right now.

The Lakers sure want to dry erase this year that’s seen few bright spots under the Cali sun. Still Scott has a lot of great young, showman talent to run and dunk with next season. Core, raw guys like Nick Young, Jeremy Lin, Carlos Boozer, Jordan Hill, Wesley Johnson, Wayne Ellington, Ed Davis and Jabari Brown should be kept in the exuberant locker room that overflows with energy, if not anything else.

Along with Point Guard of the future, Jordan Clarkson, who in just half a season of no more DNP’s was the coaches decision for a top ten player of all rooks and may have even been a better rookie than Randle if Julius suited up more this campaign, despite being a second round, late sleeper.

Must Read:
Lakers STAPLE Their Preseason Back Up Back Home

And this young Jordan is already back in the gym.

Now once this impressive duo of Randle and Clark get really going they could become the new dynamic for the purple and gold. Still being in the draft lotto again is just the stub for the Lakeshow hub who have seven of Julius’ Kentucky alumni to choose from and more in what’s set to be a class apart for the future.

Whether the Harrison twins, Frank the Tank or more from the new school graduate to the city of lost angels, its clear the Lakers future looks California bright in a Los Angeles that has now seen the one-time comedic Clippers as the Staple, champ dethroning, Spur shootout winners.

Still what about right now?

Kobe’s still the man! But for how long is another matter in the next season which owner Jeanie Buss is dubbing a “celebration” of his career. Will this toast be a swansong maybe? Is the Kareem chair coming a rocking? Either way there’s still some venom left in the Mamba, but they’ll need someone else to help them drain it before the young blood takes over.

They say breakfast is the most important meal of the day and the Lakers sure want to make a meal out of Kobe’s meeting with Rajon Rondo in Boston this Winter. Still, after Dallas this Point Guards stock has gone down…but has his price? Especially after Clarkson gives them a point for the future.

Then how about some Love? Cleveland certainly haven’t been giving Kevin any lately and surely even without popping out a shoulder, his ‘Bron burdens would have lead to him running off court at a frantic pace sooner than later anyway. Still, hate may just be in the air for Love as he has stressed repeatedly that he won’t end up in Lakerland.

Even if he did start his basketball career in the college halls of UCLA. Even if he is the son of a Beach Boy, you may not find him in Venice. Maybe the closest he’ll ever get to the Lakers is last year in their former home of Minneapolis with the Timberwolves.

So, the Lakers may turn their attentions to Portland this Summer, where their star Power Forward LaMarcus Aldridge is on the table. The Lakers want to make LaMarcus Aldridge an L.A. king and their next, great big man in their Mikan, Wilt, Kareem and Shaq long lineage. Still the moneys on this guy replacing Tim Duncan in San Antonio, in more ways than one after the end of this season if he does blaze a trail away from Rip City.

Then there’s the restricted free agent of Jimmy ‘Buckets’ Butler, the next big star in this league that could serve the scoring that will be lost once Kobe lets the sneaks hang. The Lakers are prepared to offer Jim the maximum. But in upping the ante we can’t imagine the Chicago Bulls not matching the offer for the ‘Most Improved Player Of The Year’, especially if he helps lead the Windy City charge to a championship.

More agents becoming free could set the Lakers this straight next season. Especially if the King opts out…but we all know how that played out last season. Sure the Lakers swung Babe big last offseason and even missed out on retaining Pau Gasol whose having the playing year of his life. Still the potential of even a Rondo, Kobe, Butler, Randle and Aldridge line-up with Clarkson leading the bench as Sixth Man has dynasty written all over it…let alone championship.

Then who wouldn’t want to play with Kobe?

Time for the Showtime script to have a Hollywood ending twist.