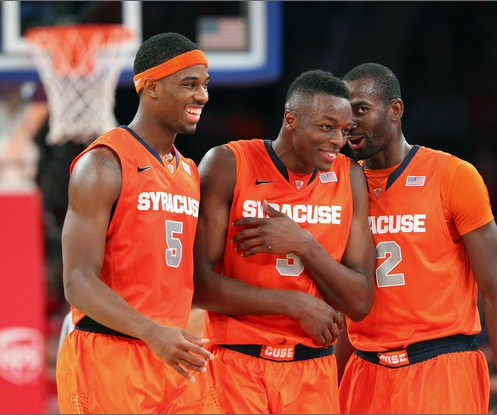 Ottawa, Ont. – (BasketballBuzz) – The Syracuse Orange completed a perfect 4-0 sweep of their 2013 Canadian university opponents by making quick work of the Ottawa Gee-Gees on their way to a 73-50 victory at Montpetit Hall.

The Gee-Gees hung tough in the first half, and kept pace with newest members of the ACC thanks to timely three-point shooting and trailed 34-28 at half-time as Ottawa sharp-shooter Johnny Berhanemeskel scored 13 of his team-high 15 points, despite two missed easy dunk attempts in the opening 20 minutes he led all scores at the break.

Four missed free-throws by Berhanemeskel in the opening minutes of the second half further squandered the opportunity to cut into the Orange advantage and just as quickly as the Gee-Gees were launching what should rank as a school record 44 three-point attempts, the lead ballooned to 26 points as Syracuse easily capitalized on 22-2 run while holding Ottawa scoreless for over an eight minute stretch.

DaJuan Coleman hurt the smaller Ottawa Gee-Gees with a game-high 26 points and 7 rebounds to pace the Orange while Rakeem Christmas collected a double-double with 12 points and 11 rebounds. B.J Johnson added 9 points and 8 rebounds. Sophomore Jerami Grant also made an impact with 8 points and six rebounds.

Berhanemeskel was the lone Gee-Gees player in double-figures with 15 points and six rebounds. Vikas Gill sparked the Gees early with back to back treys and added 8 points and 8 rebounds in the losing effort. Ottawa went 9-for-44 (20.5%) from the 3-point line and shot just 22% for the game, going 17-for-76.

“I thought we definitely did fight and didn’t just get pushed around throughout the game, we got a bunch of offensive rebounds and got enough shots up (20 more), they were tough, but we ran some of the stuff that we liked and missed some shots, but that’s our identity.” said Berhanemeskel

Syracuse pounded the ball inside, managed a healthy shooting percentage at 53.6% from the floor and only attempted 7 shots from outside the arc. Jim Boeheim and the Orange edged out the Gee-Gees on the boards 49-39 despite 25 offensive rebounds by Ottawa.

“This has been a great trip and a really good experience for our players, the freshmen were able to get in there and see what they have do and learn that the things that they did in high school you cant do at this level.” a delighted Boeheim commented after the game.

When asked to describe the difference between the two games in Montreal and the ones in the Nations capital, the Hall-of-fame coach had this to say:

“Overall, these two games have been really good for us.”

Syracuse played without C.J Fair and the Ottawa Gee-Gees were also without starting PG Mike L’African who scored 24 points against the Wisconsin Badgers.