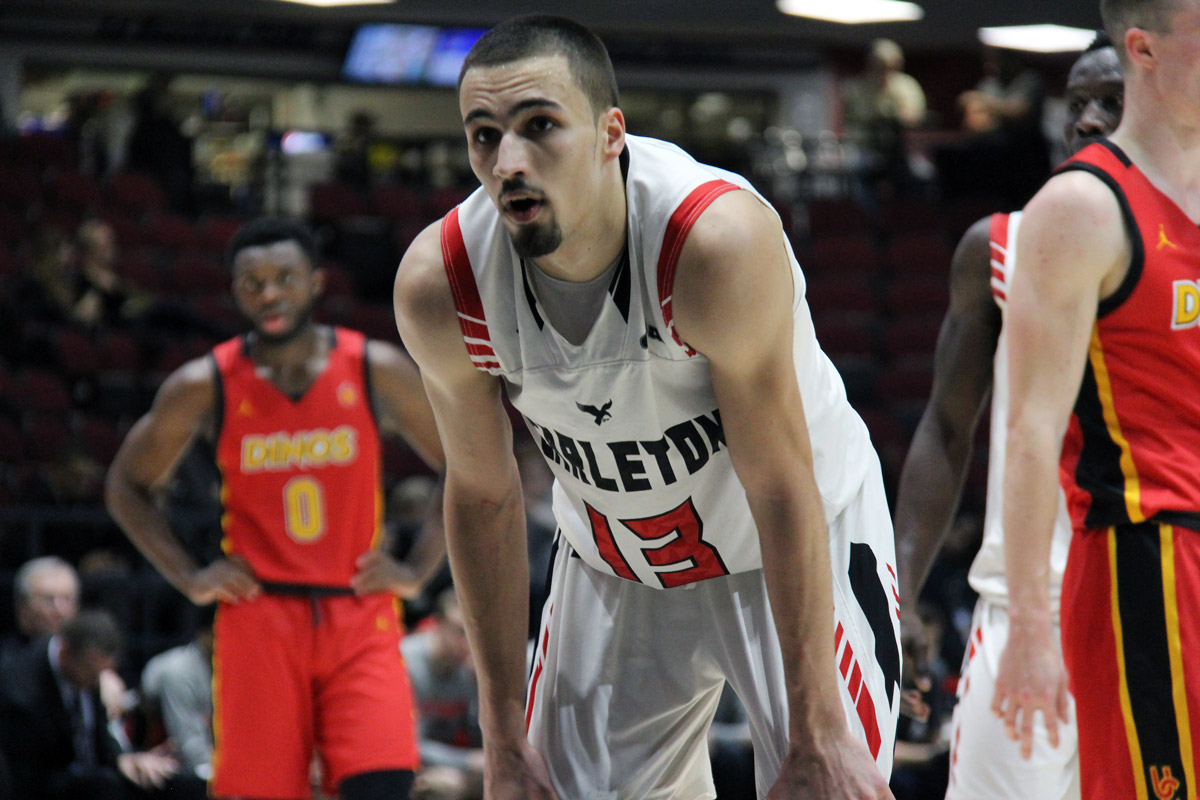 For many U Sports men’s basketball teams reaching the semi-finals of a national tournament is usually the pinnacle moment of the program and the highlight of many student athletes’ collegiate careers.

For the Ravens’ anything less than a national championship and a W.P McGee trophy is simply considered a failure and a disappointing season.

The No. 1 Carleton Ravens’ continued their march toward their fifteen national title by defeating the Calgary Dinos 82-66 in the second quarter-final of the day to advance to their 18 straight national semi-finals.

Since winning their first title in 2003 the Ravens’ have become synonymous with semi-final Saturday and championship Sunday. The standard for Canadian university basketball failed to qualify for the 2002 Final 8 and has since ripped off 46 wins (quarter-finals, semi-finals and championship games) on their way to 14 national titles.

Acadia (2008), Saskatchewan (2010) and Ryerson (2018) are the only three teams to beat Carleton in the semi-finals. Guaranteed money, the Ravens’ are a perfect 14-0 when reaching the championship game.

The Ravens’ were paced by the hot had of senior guard Isiah Osborne (Windsor, Ont.) with 20 points, 6 rebounds on 7-of-13 shooting, including 4-of-5 from downtown. Sophomore Biniam Grebrekidan (Alymer, Que.) notched a double-double with 12 points and 11 rebounds in a match-up against 2020 U Sports Player of the Year Brett Layton.

“It was definitely a big challenge, an exciting challenge. We played these guys in the preseason, before that he wasn’t really All-Canadian and Player of the Year. Now knowing that from the awards and seeing all that, my motivation was there to prove that I should be as good as him.” discussed the second-year 6’9″ forward.

Alain Louis (Montreal, Que.) continued to assert himself as a top playermaker for the Ravens’ with 7 points, a game-high 7 assists and 4 rebounds in 25 minutes off the bench. The junior guard’s attacking style of play and downhill drives down the throat of opponents have become a feature part of Carleton’s offense and a tough match-up for opposing teams.

“The biggest thing about his growth is being in your third-year. Your first year you don’t really know what you are doing, second-year you kind of start figuring a little bit of the things you need to do, the adjustments you need to make, because if you had any success in your first-year, people are going to adjust to the success you had. Your second year is a bit of an adjustment period. To be honest the coaches ask more of you because you are in your second-year and I find the third-year, luckily I came in now when he is ready to blossom as a basketball player.” shared Ravens head coach Taffe Charles during the post-game breakdown.

“Our team generally, were about competition, even internal competition in terms of who is going the best, that person gets to play and between one and twelve know that, so again he has done a great job and has done a good job all year, so let’s get him the ball.”

The Dino’s got a stellar performance from Layton, dominating the interior with 23 points, 16 rebounds, 4 blocks in 35 minutes. Ezeoha Santiago also reached double figures with 14 points, 4 rebounds and 4 assists.

Carleton’s win subsequently sets up a rematch of the 2020 OUA conference championship game against the Western Mustangs. Led by an unbelievable three-point barrage, the Mustangs throttled past the Alberta Golden Bears after trailing by 16 points in the first quarter. The Ravens defeated the Mustangs 66-65 on a game-winning pull-jumper by Stuart Turnbull in the 2009 national semi-finals at Scotia Bank Place in Kanata. Overall, Carleton has won 25 straight games against Western since 2003.