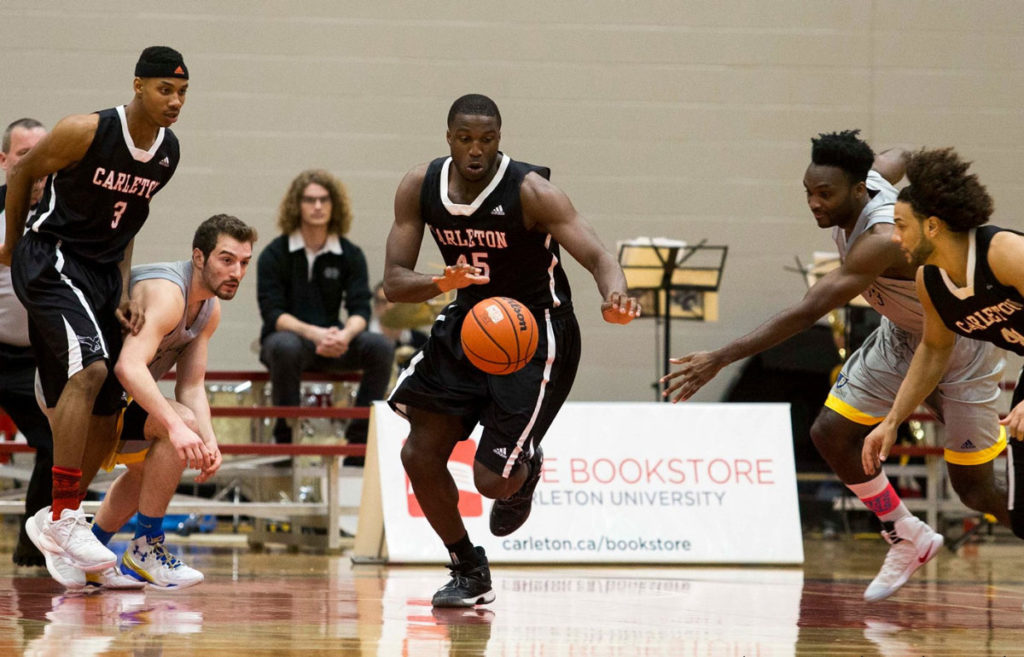 The defending CIS champions Carleton Ravens tipped off their 2015-2016 season tonight against the Laurentian Voyageurs. The five-time defending champions looked completely different stepping on the court. With over seven new players and a new head coach Ravens fans did not know what to expect from the dominating squad they were accustomed to seeing the past decade.

The first quarter was a defensive quarter for both teams. The Ravens shot 41% finishing the first-quarter with 19 points. The Voyagers shot 31% as they finished the quarter with 15. The second quarter was led by the (Illinois/Cleveland State transfer) Kaza Keane as he finished the half with 12 points 3 rebounds. Runner-up in points was Anthony Lacoe who led his team with 10 points.

Ryan Ejim came out the second half aggressively. As he helped the Ravens kick into high gear with a 10-0 run to start the quarter. His physical play led him to 10 points in the first 6 minutes of the quarter. The Ravens defense also played a big part in their third quarter run. A put back dunk by Connor Wood helped intensify the crowd and his teammates. The Ravens outscored the Voyageurs 37-8 in the 3rd led by Ryan Ejim and Cameron Smythe. The fourth-quarter was a slow start for both teams. The Voyageurs made couple of big defensive plays early as they forced the Ravens into couple of 24 seconds shot clock violation. Nonetheless the two teams exchanged buckets the whole quarter as the Voyagers finished with 15 points and Carleton 17.

The new look Ravens gave the fans a show that they are accustomed to seeing. Making their first win of their 2015-2016 season a remarkable one as they had a commanding victory of 93-48. Ryan Ejim led the team with 18 points, 9 rebounds  and 3 blocks. Six players for the Ravens finished in double-figures. And Anthony Lacoe led the way for the Laurentian Voyageurs with 15 points. After the game Coach Rob Smart spoke to BasketballBuzz and mentioned – “We played alright especially our veterans. We have such a young team so we need our veterans to be a lot more solid and comfortable night in and night out.” Also identified that “our whole staff is trying to do the job this year” as they looks to fill the void for his uncle, the legendary 11-time championship coach Dave Smart.