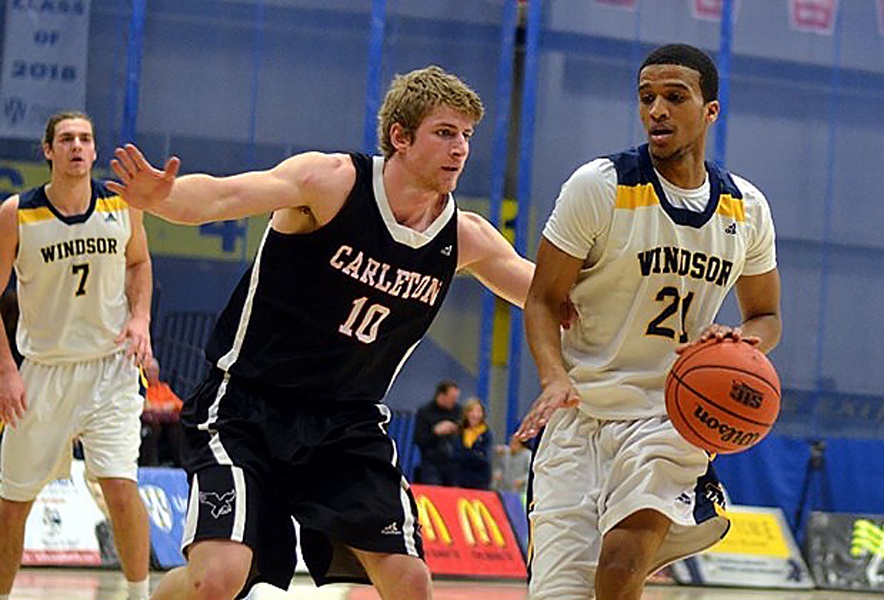 Windsor, ON – For the second time in three years the Windsor Lancers have shocked the nation by upsetting the mighty Carleton Ravens 74-71 on the home floor. With the Lancers leading 73-71 with 29 seconds left in a highly anticipated and tightly contested the game, fifth-year forward Rotimi Osuntola Jr.  swatted away a potential game tying layup by Philip Scrubb to give the Lancers their fourth victory over Carleton during the Chris Oliver Era (2005-2015).

The Lancers hungry and ready to show the rest of the country that they belong the in the conversation elite teams in CIS Basketball jumped out to a 16-5 lead over the Carleton Ravens on the strength of their athleticism and hot shooting. Carleton ripped off a 12-0 run and outscored Windsor 13-3 to close out the quarter but still trailed 19-18 after the first ten minutes of action.

Carleton Ravens Jean Pierre-Charles picked-up the scoring load by scoring nine-second quarter points as Carleton grabbed a slim 37-34 advantage over the Lancers at half-time. The see-saw affair continued in the second-half as both teams failed to create any separation in a three-quarter that saw two lead changes and two ties with Carleton going ahead 51-49 after three quarters.

Philip Scrubb and Thomas Scrubb flexed their muscles early in the fourth quarter as the Ravens went ahead 61-54 on a 6-0 run with 6:17 to play but behind the consistent play of Rotimi Osuntola Jr., Khalid Abdel-Gabar and three-straight jump-shots from Mitch Farrell the Lancers ripped a decisive 9-3 run and grabbed a 69-65 lead with 3:13 remaining in the game. Philip Scrubb knotted the game at 71-apiece with a deep triple.

Rotimi Osuntola Jr lead a scores with a game-high 22 points and 16 rebounds, Khalid Abdel-Gabar added 18 points and five rebounds and Mitch Farrell finished with a solid 16 points and 8 rebounds in the win.

Carleton was paced by Thomas Scrubb’s 20 point, 11 rebound double-double and Philip Scrubb struggled all-night an finished with 12 points on 4-of-14 shooting.

The Lancers improve to 8-3 in league play, 19-5 overall while the Ravens drop to 10-2 in the OUA and 20-4 overall, with losses coming against Indiana Hoosiers, Ottawa Gee-Gees, Syracuse Orange and the Lancers.