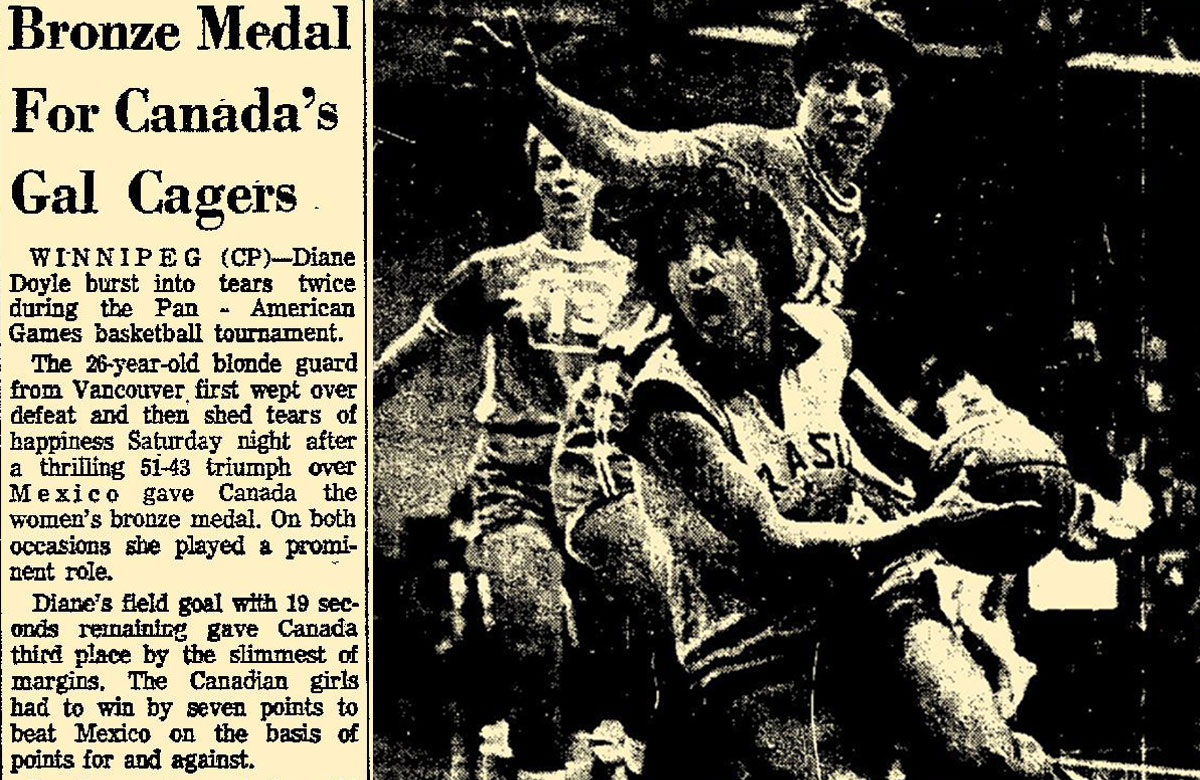 “The Pan Am Games ended in disappointment. Sorry, I prefer not to visit that memory.”

This was the text message reply to an interview request with one of the players of Canada’s men’s basketball team at the 1967 Pan American Games.

Held in Winnipeg, Manitoba from July 24 to August 2, there were many a critic in regard to the Canadian Amateur Basketball Association (CABA) and the selection process of both Canada’s men’s and women’s hoop squads.

Sports writer Ken Fathers of The Windsor Star, wrote just prior to the tip-off in Winnipeg, “(Canada) needs a fresh new look, instead of the tired old men from Senior A basketball.”

Up until this date, the CABA had the champion of the Canadian Senior A Men’s basketball finals represent Canada at major international venues that same year.

The team, which usually came from British Columbia, Manitoba or Ontario – would be supplemented with a few other members from the Senior A ranks.

Fathers was keen on having more representation from the Canadian Interuniversity Athletic Union (CIAU).

Around the same time Fathers had made this opinion, Bob Samaras, who had guided University of Windsor Lancers to three CIAU titles in the last four years, was also giving of his thoughts in the media.

“I’d consider it an honour to be selected to coach Canada’s national team. With so many fine prospects in college and Senior A ball…there is no reason in the world why Canada should not do well in international competitions such as the Pan American Games.”

A month later, the CABA announced its coaches.

Reuben Richman, a Toronto lawyer, who was a player/coach of the 1964 Olympics squad, will head the men.

The suggestion by Ivor Wynne that the two teams practice at the University of Windsor as the city of Detroit across the river would provide top amateur teams to scrimmage against, was turned down by the CABA.

Each coach would also be responsible to invite the players for tryouts.

Richman invited a few university graduates, including the highly-acclaimed Angelo Mazzuchin, who paced University of Windsor Lancers to four CIAU titles. He declined the offer due to research work and an impending wedding.

Richman had disagreed with the usage of post-secondary players:. “The best Canadian players in Canada are playing Senior A basketball. It is my hope that at the Pan American Games, the fact that we will have twelve strong men, rather than the nine or 10 at Tokyo… will remedy any possible let-downs at the end of the (Pan Am Games).”

Canadian men were placed in Group B with Argentina, Brazil, Cubs and Mexico.

USA would win all nine games, dribbling to the gold medal, by an average margin of victory of 43.6 points.

“No body contact at all was allowed,” said Canada’s starting pivot 6-foot-10 Bobby Croft, who would soon start his first year of hoops and academia at the University of Tennessee.  “I got sent off for checking a guy I hardly touched.”

Croft would head to the bench early into the second half, along with fellow tall timer Bob Inglis (6-foot-10) fouling out. Inglis only a few years prior had played at Brigham Young University.

“We don’t have enough height, and it doesn’t help when the few big guys we have fouled out,” recalled Richman. “They’re sure cultivating them bigger in Cuba these days.”

“We just weren’t sharp enough. We will be tougher against Argentina,” said Richman.

Canada’s full press cut a 15-point led to a single point with 45 seconds remaining. A basket and free throw by Ricardo Alix secured the win.

Richie Spears scored with five seconds remaining in regulation, but time ran out.

This was the third loss in- -a row, knocking out any chance of Canada going to the 1968 Symmer Olympics

Cook and Barry Howson had 19 points each in loss

Tomas Sandor has a game high 25 for Argentina.

“I’m pleased with the way the boys played,” said Richman. “Losing to a team like Mexico (with four wins) by four points, is no disgrace.”

Croft once again was in foul trouble, heading to the bench in the second half.

Alejandro Guzmanled had 15 points for Mexico. Howson replied with 26 points for Canada.

Fred Ingaldson tied the game in the dying seconds, but Peru broke it open in overtime.

Croft had 20 points in the loss. Croft would go on to play professional basketball in the American Basketball Association for the Kentucky Colonels and Texas Chaparrals in 1970-71.

Canada finished the tournament winless in six games for a 9th place finish.

Diane Doyle. 26, scored a game high 20 points, including an eight point run that broke the game wide open early in the second half. The Burnaby, B.C. star also hit a basket from 25 feet out.

Barbara Robertson of Ocean Falls, B.C. chipped in with 10 points

This was Canada’s second win in 16 years of international women’s basketball competition.

“The difference this year is that we learned to run and can force the other teams to play our style. The girls came to our camp with good fundamentals, which allowed us to concentrate on playing as a team,” said Wilson.

Margueruat Skeete had 18 points for Cuba

“We had our chances to sew up the game, but somehow the ball didn’t find the net.” – Wilson.

Marry Coutts of Victoria, B.C. had 11 point in defeat. Carole Aspeden’s 26 points was top for USA

Canada’s team manager Nora McDermott said: “We were getting closer to the basket than we have been during the tournament, but our shooting under the basket was terrible.”

Diane Doyle’s field goal with 19 seconds remaining gave them enough to win the bronze medal on the basis of points for and points against. Canada needed more than a seven point margin.