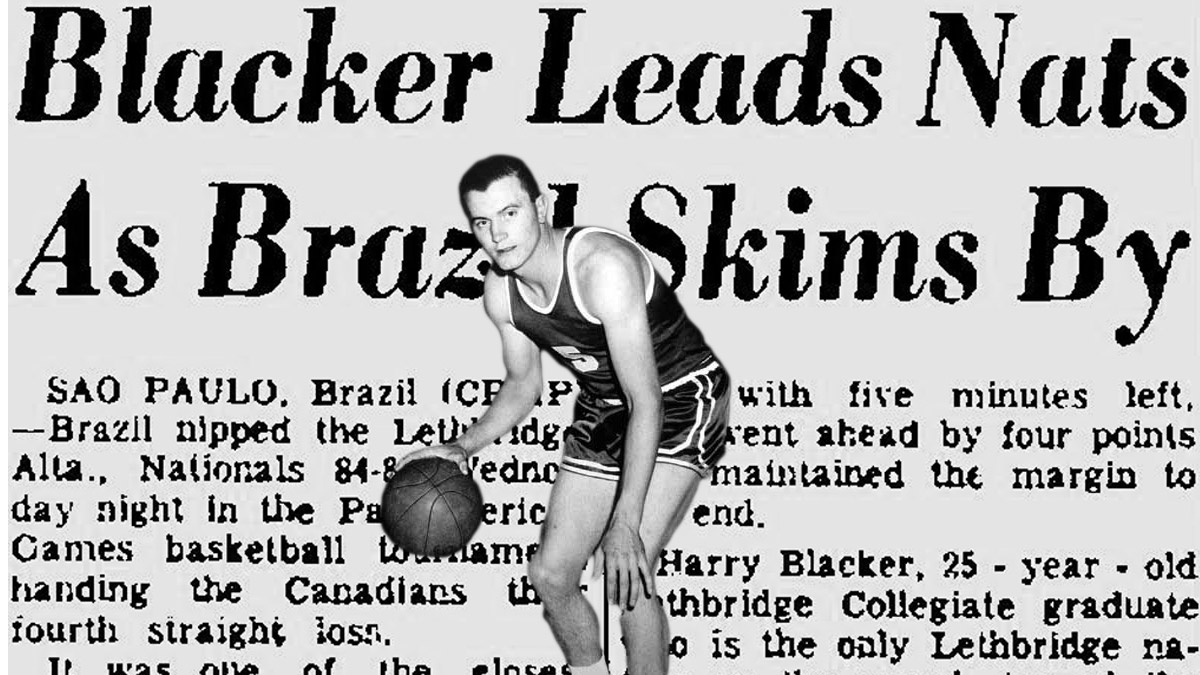 The Lethbridge Nationals men’s basketball squad would do double-duty in 1963, representing Canada at the Pan-American Games, April 20-May 5, 1963, in São Paulo, Brazil and the World Basketball Championships May 12- May 25, 1963 in Rio de Janeiro, Brazil.

They had qualified earlier in the year by winning the Canadian Amateur Men’s Basketball Championships – their fourth in five years – by defeating Montreal Yvan Coutou Huskies 85-65 on March 18 for the title.

Their opening games at the Canadian nationals saw wins against, British Columbia Harlem All Stars 82-54 and Winnipeg IPAC Buffaloes 77-53.

Funding for traveling to the Brazil would be assisted by the Pan Am Games committee and the Lethbridge Kinsmen. A total of $6,800 were in the coffers when they boarded the plane.

According to the Brazilian Olympic Committee, 22 nations sent competitors to the Pan American Games held in São Paulo, but only 21 were listed.

Barbados took part in the Pan American Games for the first time.

Costa Rica, Haiti, Nicaragua and the Dominican Republic competed in 1959 but did not participate in these 1963 Games

Behind as much as 18 points during the first half, Canada cut the deficit to two down 36-34 at the half.

Switching from man-to-man defence to a zone, proved the winning factor as Lethbridge native Harry Blacker led Canada with 18 points.

Inducted into the Lethbridge Sports Hall of Fame in 1985, it is written of Harry Blacker …”was an outstanding all-round athlete and a leading member of the Broders Chinooks basketball teams that dominated senior men’s basketball in Canada during the late 1950’s and early 60’s. Blacker played, when the Broders won the 1961, ‘62 and ‘63 Canadian Championship.

Behind a 14-point effort from Gary Bradds and 12 points from both Melvin Peterson and Jerry Shipp, the U.S. ran by Canada 80-47.

Blacker replied with 12 points for the Nationals.

Team USA also featured future NBA All Star Willis Reed, who would become a seven- time NBA All Star while leading the New York Knickerbockers to two titles in 1970 and 1973.

Canada pulled ahead 45-44 in the second half but with a few minutes remaining, Puerto Rico star Angel Cancel exploded for eight of his game high 24 points.

Canada was led by 20 year-old Gordon Fester with 20 points.

Neil Dirom, Gordon Fester and Ken Larsen fouled out in the second half, leaving the Canadians with few tall timers.

Fester had nine points for Canada.

The Brazilians were ahead 38-33 at the half and Canada held a two point lead with six minutes remaining in regulation.

Amaury was enshrined into the FIBA Hall of Fame in 2007.

Canada would finish sixth in the tournament.

In the final, as reported by USA Basketball, it was USA against the host Brazil.

“Facing host Brazil in the final, it was reported that an estimated 30,000 fans jammed the 18,500 capacity stadium for the gold medal game. Leading by five points at half, 36-31, the U.S. team pulled away in the third quarter and went on to record a 78-66 victory.

Shipp led the USA with a game high 22 points, however, it was the smallest member of the U.S. squad, 5’8′ Vincent Ernst of Providence College, who was credited for paving the way for the U.S. victory over Brazil. Scoring a total of 24 points in the USA’s first five games, Ernst accounted for 12 points in the final and was credited with numerous assists and steals, while limiting Brazil’s two-time Olympian Wlamir Marques to just six points in the first three quarters of play.

However, the game was not without controversy. Following a scuffle between a Brazilian and USA player late in the game, the crowd proceeded to litter the floor with oranges, paper, ice cream cones and other debris delaying the game’s conclusion.”

Canadian star Logan Tait, who had to miss both tournaments in Brazil due to work commitments in Lethbridge, was not surprised by the Nationals showing.

He pointed out that the club was playing out of doors, something they’d never done before and were using the international basketball for the first time.

The international basketball is much like a soccer ball, smaller and lighter than a regulation basketball.

Things did not start out well for Canada as Beverly Coward was released from hospital on April 20 after suffering food positioning on the flight to the event. The cause was believed to be cream puffs.

Nora McDermott played for Canada at the Pan American Games in 1955, 1959 and 1963, although her teams failed to finish higher than fourth. She did manage the team that claimed a bronze medal at the 1967 Pan Am Games in Winnipeg.

The Philippines was supposed to host the FIBA World Championship in 1962 but FIBA revoked hosting rights after the government of then President Diosdado Macapagal, refused to grant visas to players and officials of socialists countries including Yugoslavia and the Soviet Union

Brazil being the defending Champion and a previous host, fairly managed to re-host the Championship and won the first back-to-back title with just six games by seeding the well-rested host team in the final round only.

Preliminary round: Three groups of four teams play each other once; top two teams progress to the final round, bottom two teams relegated to classification round.

Classification round: All bottom two teams from preliminary round group play each other once. The team with the best record is ranked eighth; the worst is ranked 13th.

Final round: All top two teams from preliminary round group, the 1960 Olympic champion, and the host team play each other once. The team with the best record wins the championship.

Prior to the tournament Canada was considered the “Dark horse” team. “Canada can beat Russia,” said Hank Vaughan, a scout for the U.S. Amateur Athletic Union.

Canadian coach Bob Hamilton was sure that the Russian’s lied on the height of the players on their roster.

With that distinctive height advantage coupled by a solid man-to-man defence the Russians led the entire contest with Alexandre Petro dropping 14 points.

Lance Stephens had 13 points and Neil Dirom had 10 in a losing cause.

The game, played on a “slippery floor” was watched by 5,500 fans at Minas Tennis Club Gymnasium.

Russian Coach Alex Gomelsky said of the game that “his players were nervous at the start as this was their first game but he expects them to improve a good deal.”

Russia went to the free throw line 38 times while making 22.

Canadian coach Hamilton was not  thrilled by the South American “rowdy fans” during the tournament.

“The Russian coach was burned on the side of the face by a smoke bomb hurled in one game. They spit on me one night and Harry Clackers tuned an ankle on one of the many nuts thrown on the floor”

Canada was down by 10 points early in the game and brought it to within three goals in the second half.

Uruguay, who would connect on 20-of-30 free throws, including six in the final minute, after leading 27-25 at the half.

Sergio Pisano had 16 points in the win.

Once again Lance Stephens was tops for Canada with 16.

Max Dorigo had a game high for France with 24 points while Ken Larsen was tops for Canada with 14.

Duarte had 14 for Peru with 14 and Allen West sparked Canada with 18.

Edison Ciavattone scored 20 for Uruguay who were 19-29 from the line.

Canada once again had a comfortable halftime lead 51-34.

Gordon Fester was tops for Canada with 19 while Dave Way added 16,

Gordon Fester netted 28 for Canada with 28.

Takashi Masuda responded with 25 for Japan.

“Against Japan we shot a fantastic 57 per cent of our field goals. “ said Hamilton. “We were down four points with just over a minute to play but Blacker sunk a basketball and Fester made three to win.”

Canada finished classification pool play tied with Mexico and Uruguay at (3-2) but point differential in games among the trio places.

“One thing I want to say for our players is that this was no joy ride for them. They worked and they worked hard to do their best,” said Hamilton.

“Food and accommodations was dreadful. I Iost 19 pounds myself eating strange food that was seldom severed warm and sleeping 12 to 14 to room.

“Our boys weren’t used to this. For some of the countries this was not new. Many of the players came from homes which sleep large members in one room. Our boys couldn’t adjust.”

Hamilton was also upset that the Canadian team had to raise their own funds to attend while other countries only had to worry about games.

“Of all of the other teams which were down there, we were the only ones…the only ones that were concerned with raising money to go. All of the rest of them had all been sent by their basketball organizations or by their government.

“It is pretty tough to try to get your team fired up against opponents who are treated so well by their home groups.”