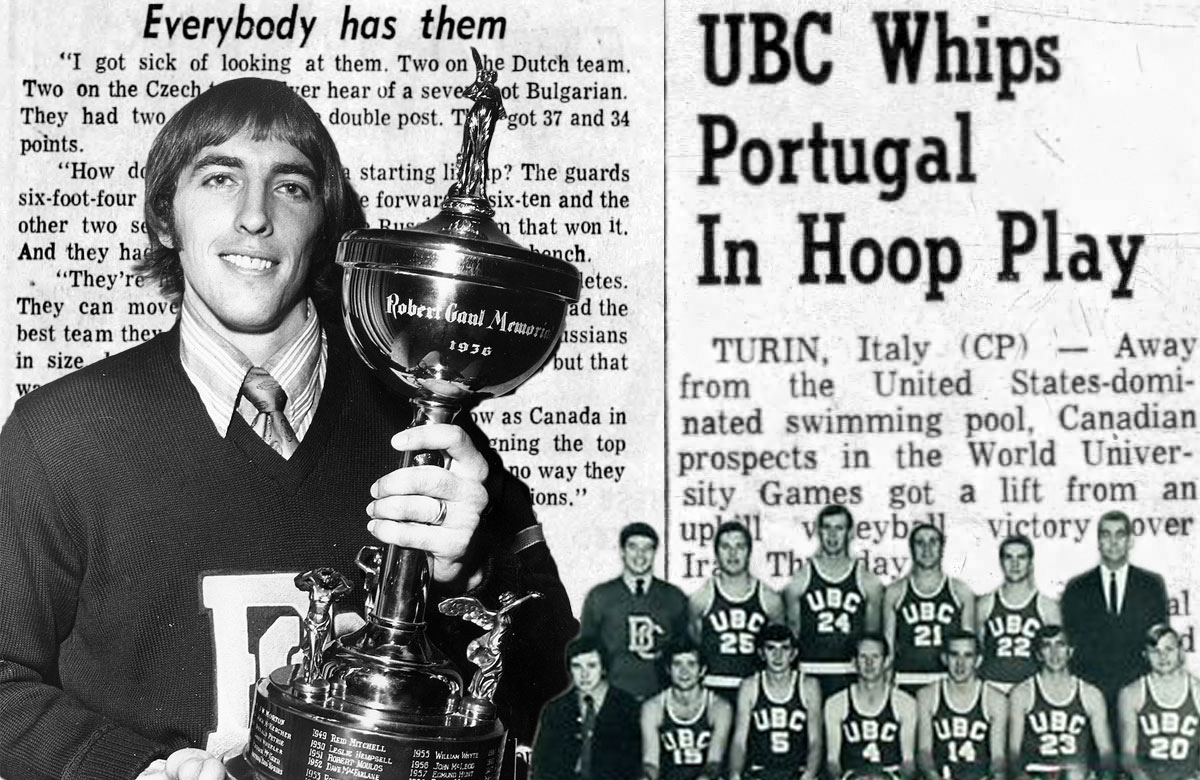 “A picture is worth a thousand words.”

At the far right of the back row is Thunderbirds head coach Peter Mullins.

He towers above all the players except one.

Height, the lack of height for the Canadians, would be evident during this tournament held August 27 – September 7, 1970 in Torino, Italy.

“It’s patently ridiculous when the coach towers above all the players but one in a team photo,” recalled the 6-foot-4 Mullins in a 1970 newspaper article.

The same problem had plagued Canada four months prior at the 1970 FIBA Men’s World Championships in Yugoslavia.

In Yugoslavia, the Canadians finished 10th out of 13 teams.

Mullins had mused that at the 1970 FIBA Men’s World Championships, “That these were the tallest players and teams,” he had ever seen.

In Italy, at these 1970 World Student Games, it was unpleasantly worse according to Mullins!

“It was even worse. I’ve never seen so many seven-footers in all my life. Not just the Russians and Americans. Almost everyone else.”

“I got sick at looking at them. Two on the Dutch team. Two in the Czech team. Ever heard of a 7-foot Bulgarian? They had two of them in the double spot. They got 37 and 34 points.”

“How do you like this starting lineup. The guards 6-4 and 6-7. One forward 6-10 and the other two 7 feet. This was the Russian team that won it. And they had two more 7 footers sitting on the bench.”

“They’re not just tall, they’re big, and they’re athletes. They can move and they can shoot.”

Must Read:
Canada opens up 2019 Pre-FIBA World Cup schedule with 96-87 win over Nigeria

With a comfortable 50-26 halftime cushion, Canada won their opening game by 33.

Bob Molinski picked up where he left off at the FIBA World Championships – where he averaged 17 points per game – by dropping in 20 points.

Despite an eight-point lead at the half 48-40, Canada fell to the Koreans led by Lee Hi-Talk Kang’s 21 points.

MacKay led Canada with 24 points and Thorsen had 20 before fouling out.

Finishing 1-1 in Pool play, Canada is relegated to 9-16th consolation.

Canada was down 36-26 and never came within striking distance in the second half. Thorsen with 12 and Molinski 10. Hur Gureralp Poyrazoglu had 24 in the win.

Canada up 44-26 at half let the Czechs come close but managed to pull out a four-point victory. Thorsen had a game high 28. Voracka Zednicek 25 and Blazek 27 points in the loss.

Down 42-36 at the half, Canada scored eight straight to start the second half. Two Sankey free throws at the end of regulation were the difference.

Thorsen 19 and Molinski 16 while Karasz Hallmes had a game high 29 for Hungary.

“I think we’re physically able to win the rest of the games in our grouping,” predicted Canada head coach Peter Mullin, following the victory. “But the mental strain is tough and playing every day is something our kids aren’t used to. But that’s international sports, and we’ll just have to cope with it.”

Must Read:
'The Joker' Nikola Jokić Holds The Most Valuable Player Card

Molinski 22 and Thorsen 26 in the loss, with Canada finishing 4-4 overall.

Canada would finish 11th out of 29 teams.

USSR beat USA 78-71 for the gold despite the Americans having future ABA-NBA stars George McGinnis, Jim McDaniels and Dave Robish.

The sixth Universiade was originally scheduled to be held in the summer of 1969 in Lisbon, but with Portugal mired deep in political crisis, Torino  – host of the inaugural Summer Universiade in 1959 – came to the rescue.

The Torino 1970 Summer Universiade broke further ground for future Universiades, playing a crucial role in the evolution of the university sports movement.

Canadian athletes along with 34 media persons and CBC stayed at Albergo Ligure Hotel.

Mullins final thoughts on Canadian international hoops: “It’s not as if we don’t belong or that it’s a waste of time to send a team, Our outside shooting is as good as anyone’s. We play defence better than most. We have speed. But please, will someone tell me? Where can we find size?”