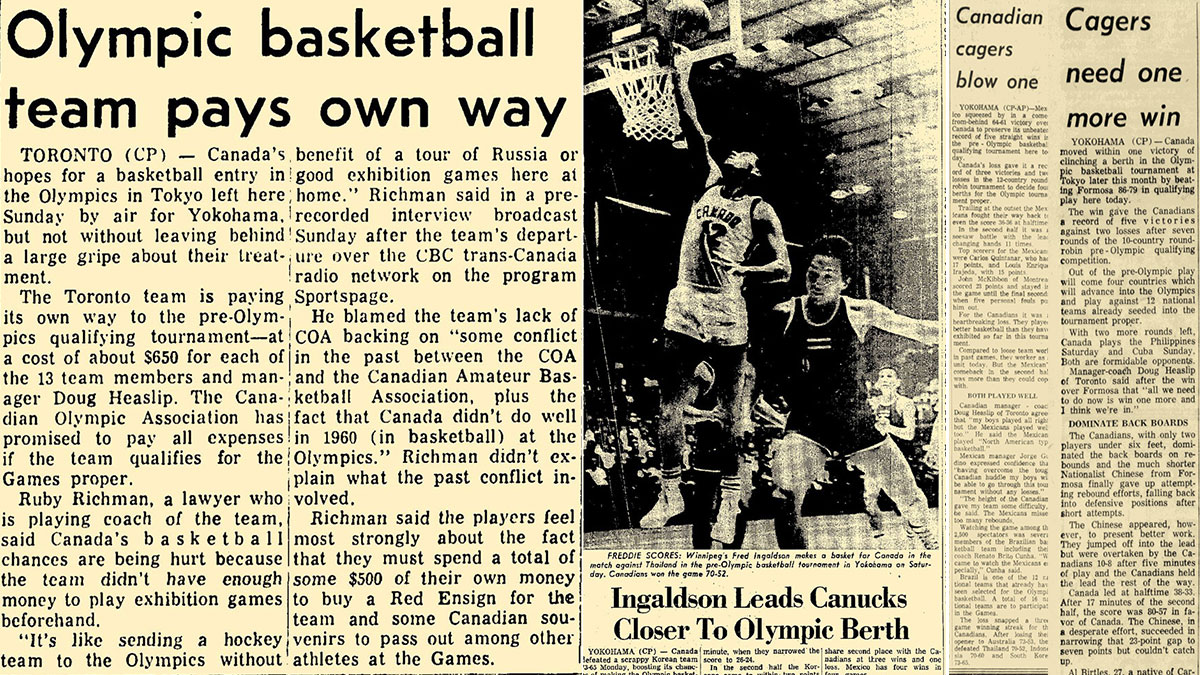 As had been the case many times in past international men’s basketball events, our Canadian rep at the 1964 Pre-Olympic Basketball Tournament (Pan Continental)  had to raise their own funds to attend the September 25 to October 4 tournament in Yokohama,  Japan.

This non-funding action was set in motion by the Canadian Olympic Committee in that Canadian men had failed in 1960 Olympic pre-qualifying and had placed 9th at 1948, 1952 and 1956 Olympics.

“People just don’t seem to realize that we are going over to represent Canada. We’ve bought uniforms, blazers and so on and nobody will be ashamed of us,” predicted team manager Doug Heaslip in a newspaper article.

“We figure in that we are going over as goodwill ambassadors for Canada, some government agency at least would give us a flag or at least the money to buy one, so we could put it up the pole like the other countries.

“The whole thing is ridiculous, and the fellows are starting to take the attitude…The hell with it.”

Player/coach Ruby Richman gave this perspective: “It’s like sending a Canadian hockey team to the Olympics without benefit of a tour of Russia or good exhibition games here at home.”

The team was composed mainly of players from the Toronto Dow Kings winners of the 1963 -1964 Canadian Senior Men’s Basketball Championships.

Up to $650 each was coming from their own pockets. Men  that had regular day jobs: school teacher, salesman, university students, pharmacists, lawyer, engineer and grocery store manager.

“Our performance was far below normal,” said Heaslip. “We played one very bad game.”

Canada only led once in the match 11-9 after seven minutes and was then held scoreless the last 10 minutes of the opening half.

Keith Hartley and John McKibbon each had 13 points for Canada, who were outscored 51-33 in the second half.

Lindsay Gaze led the Aussies with 16.

Canada led 27-17 at the half and then exploded for 43 points in the second half.

Hartley led a balanced Canadian attack with 17 points while Vantana Teeratimakorn had 12 points in the loss.

Canada traded basket-for-basket in the second half after having a 38-28 first half edge.

Tournament leading scorer Siong Liem Siem (29.7 ppg) was held to 20. Siem would drop 59 points in this tournament against Cuba.

Despite an obvious  height disadvantage, the Korea side stayed close, down 26-24 with three minutes until the half.

They closed the gap to 57-55 but Korea lost many players to fouls including Har Ui Ken with 18 points.

Trailing most of the first half, Mexico tied it at the half 36-36.

Must Read:
The Many Problems Facing the USMNT

With the lead changing 11 times in the second half, the Mexicans pulled out the victory.

Carlos Quintanar had 17 point in the win while Canada’s  McKibbon replied with 23 points.

Mexican manager Jorge Gudino replied “The height of the Canadians gave my team some difficulties. We missed too many rebounds.’

Five Canadians scored in double figures with Birtles the high at 17. Canada led 32-10 at the half.

With the game tied 63-63 the  Philippines side missed 3-of-4 free throws in last minute. Ingladson had a free throw  with two seconds remaining. He had a game high 21 points.

Philippines coach Tito Eduque after the game said: “We had a good team combination and were fast as the Canadians. I am very sad we have been eliminated.”

The 12-team 1964 Pre-Olympic Basketball Tournament was an international FIBA World Olympic Qualifying Tournament. Originally the top two teams would qualify for the Olympics but after the withdrawal of United Arab Republic (FIBA Africa Championship 1964 winners) and Czechoslovakia (5th placers at the 1960 Olympics) two more qualifying berths were added to the qualification tournament…. thus Canada and South Korea qualified to the Olympics.