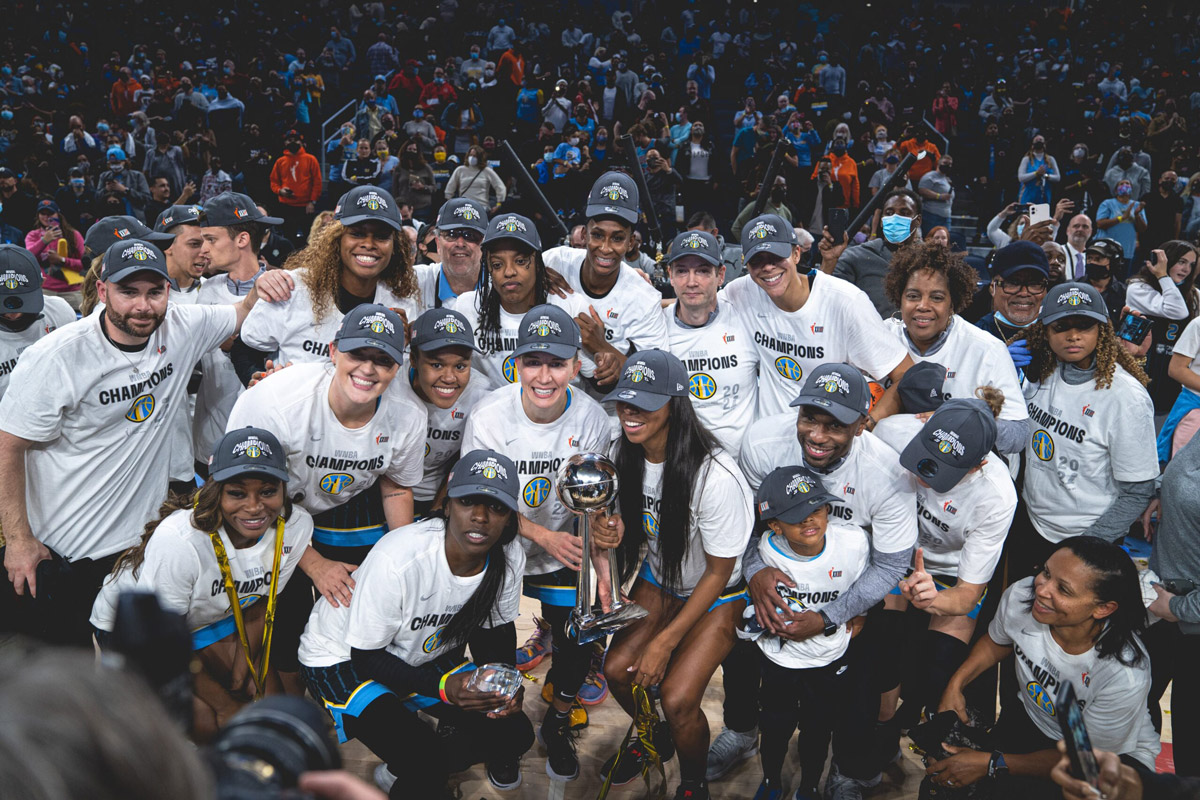 The wind this season has changed in the city of Chicago.

Grabbing a rebound like she previously did the ball on a catch and shoot, game-tying three (“YOU BET!”), Candace Parker dribbled down-court as the seconds on the game-clock ticked down. When the buzzer rang out she just ran with the ball into the arms of the bench. Tears flowing like champagne soon would. Bursting out of bottles like ticker-tape out of these sold-out stands.

Homecoming and mission complete. Job done. Pat will be watching. As proud as her old Hollywood team in Los Angeles. Legendary like a Kobe mentality.

“We got the whole city here” she told ESPN’s WNBA telecaster Holly Rowe, who’s been here through it all. As the likes of Chance the Rapper, a brotherhood of Bulls players, WNBA Hall of Famer Tamika Catchings and the whole city behind them watched the Chicago Sky reach their first ever WNBA championship.

Another ring for the legend CP3 who deserves the nickname as much as Chris Paul. Beating a fellow Phoenix team that rose to the occasion of the Finals in the same year as the Suns. All to put a new page in the history book of the WNBA’s 25th anniversary for you to count.

Sure the Mercury were dealing with a hobbled GOAT in Diana Taurasi, who got into foul trouble early and also vows to be back at least through 2022 (we waiting on you now, Sue. Happy 41st). Not to mention a missing Canadian Kia Nurse, laid up with a torn ACL. But they still had Skylar Diggins-Smith and Brittney Griner firing on all cylinders. Eighteen (18) of her 28 points came in the final frame. Although Parker matched up with Griner on the grind, woman-for-woman in the paint.

Remember the Mercury cooled off a Vegas team that has more players than those at the tables on labor day weekend. Turns out Chicago’s range is wider than the skies above where the Sky have just put their first banner. Welcomed by a pen of Bulls like the greatest of all-time, number 23.

Not since the days of Delle Donne have they come this close to getting it done. Sky-town’s Twitter tag tells us there are ‘No Ceilings’. Well, they just put a championship banner up their Wintrust Arena one.

They’ve got shooters in the wedded three-point queen Allie Quigley (26 points, 50% from three) and Courtney Vandersloot, who has now beat Sue Bird’s WNBA playoff record for games with ten assist or more. Averaging 10.1 these playoffs. And how about that stop and pop dagger to nail it? Chi-town have also got big players like Stefanie Dolson, whose in-your-face lay-up that left a mark took the lead for good in the fourth. Guaranteeing her a ring to go with that Tokyo 2020, 3×3 Olympic medal, first on the podium.

They also have the finals MVP from Philly in Kahleah Copper, who really had the gold and the Sophie Cunningham stare down photo of the playoffs.

With all due respect to Cunningham who is an absolute BUCKET and was a force in these Finals, here’s how the WNBA is looking at all the sexists right now that have something to say about the status of their place in the sport.

Copper’s 21 points and change gave the Sky Game One, before Phoenix made it all square in the second game despite Chicago’s sharpshooting spouses. But in the now penultimate Game Three, an untouchable Chicago blew-out the Mercury by 36 points as a precursor to this.

“It’s just an amazing feeling to be from here and see so many people in the stands who have been supporting you since you started,” Parker who had 16 points, 13 rebounds, 5 assists and 4 steals across the board added.

Here’s to the next 25. Just imagine where this great game and league of it’s own will be by a half-century.