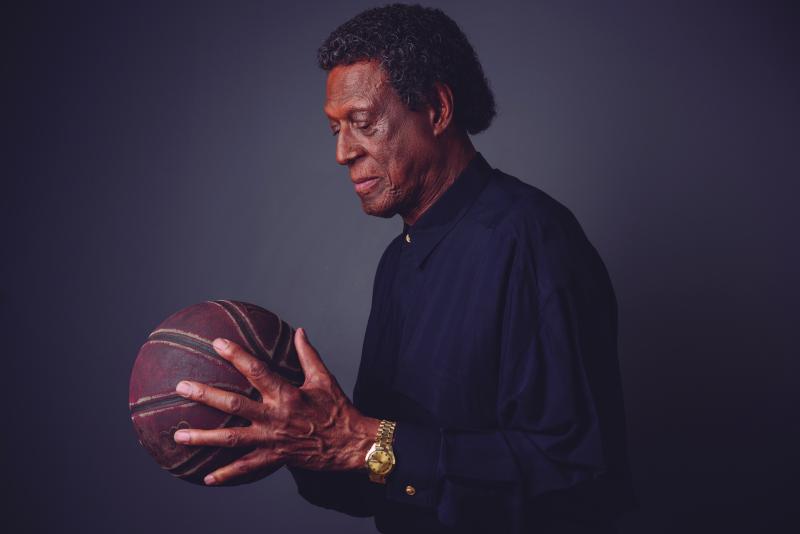 Los Angeles times read all over the world right now this summer. As even before July it’s hotter than California everywhere you walk. So why not take one in the park today and stop with a good book under the sun? And from the playgrounds to the hardwood it’s time to read all about Laker legend and one of the original all-time, NBA All-Star greats, Elgin Baylor.

‘Hang Time’ isn’t just the name of your favorite basketball show (admit it…it ain’t ‘One Tree Hill’ c’mon). It’s also the story of quite a life between the baselines. Right before this book tipped off in stores this year the Lakers put a long overdue statue of the ice of Elgin Baylor next to the fire of Jerry West outside STAPLES. Now it’s time to put this autobiography on your bedside table.

This milestone of a memoir chronicles all of this mans compelling career on the floor and the stories behind the chapters off-court. From battling Bill Russell in high-school, to Wilt Chamberlain on the playground. To becoming opponents and teammates with them respectively in the NBA. To aligning with West to rule the west in L.A. To all the Celtic heartache born in Boston as the two most storied franchises and notorious rivals in the NBA made hostile history before Magic and Bird.

Baylor’s book is right there with ‘West By West’, Magic’s collaboration with Larry, all of Kareem’s volumes of prose and the anticipation of Kobe’s Mamba memoir this fall as one of the best basketball books in legendary Laker legacy. And let’s not forget that Phil Jackson tell all. But Elgin Baylor is the original Los Angeles Laker.

Not to mention the before M.J. player that birthed the dunk above the rim game and the “hang time” of the fadeaway jump shot. Truly changing the game and making it his own and a generation of swing-men to come who dribbled their way through this big mans game, all the way to today’s small ball revolution.

Elgin moved with the Lakers from lacing the up with the blue and white of Minneapolis, to the lack of lakes and eventual purple and gold in the city of angels and stars. After the Mikan dynasty (the real original Laker, regardless of city), Baylor brought basketball to Hollywood with his highlights. And when he aligned his talents with West and Wilt he also birthed the first big-three for the super-team age we marvel at now. The only thing that could stop him or put out his Lakers chance of real gold was a Red Auerbach cigar. No matter how close they got. Remember the balloons? How could Elg’ forget?!

It’s all put down here for a book you won’t be able to. The man they used to call rabbit runs through this read like one straight from the hole. Telling us how he literally ran from racism and around any obstacle or opponent, all the way to the hoop…and the promised land. He fought the most harrowing hatred even in his own home by the evil manipulation of so-called “law enforcers” and even later in his life in the front office with Donald (what is it about that name?) Sterling when this Laker legend crossed the corridor to the Clippers.

The fact that racism is still alive today is as crazy as those that think those who take a knee hate the flag. But in making a stand and refusing to play until his and his fellow mans civil rights where granted in the land of the free, Elgin Baylor not only changed the game beyond a cliche…he changed the world as a whole. Number 22 may not be known as much as baseballs number 42, Jackie Robinson back when the Dodgers where in Brooklyn. But he for sure belongs in the same ballpark.

So make sure you swing by your local bookstore and add this history book to the rafters of your shelves. Because this one is worth more than your coffee table. His last, lasting line of finding love and holding on to it (two hands…never let go people) resonates like the wisest words of life lessons taught from a man whose been taking them to school since the playgrounds. And you can still find autographed copies of this autobiography out there. So why not cop a copy signed, sealed and delivered by the 80 year old legend himself? Because his purple inked story will last forever like all the gold in California.