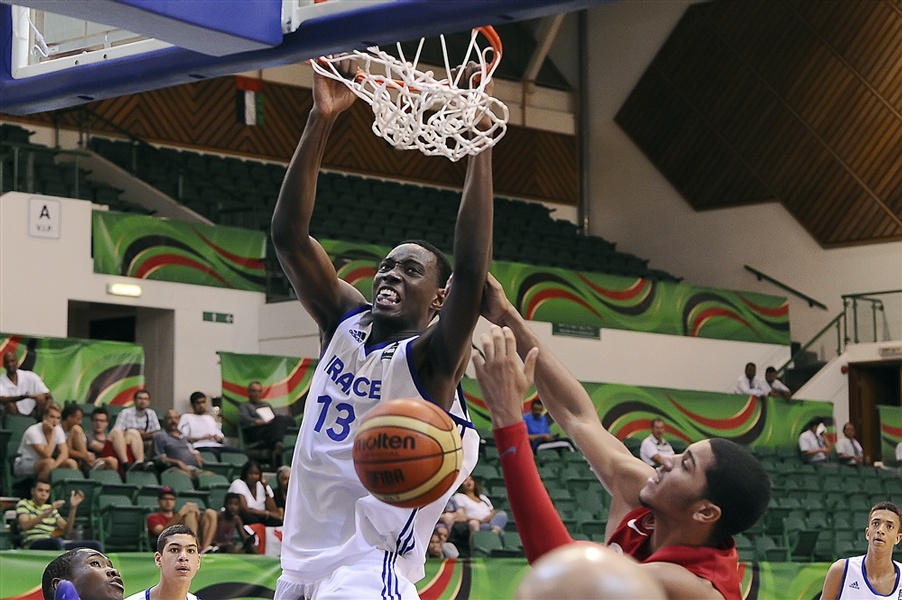 Canada’s U17 Cadet Men’s basketball team came short with a tough 76-66 loss to Team France to kick off the 2014 FIBA World Championships for Men in Dubai.

The next generation of Canadian basketball players took to the court against an athletic Team France which jumped out to a 6-0 start on back-to-back dunks to open the game. Canada quickly regrouped by ripping off 17-2 run and 25-15 lead after the first-quarter of play. Canada forced 6 french turnovers and shot 7/12 (58%) in the first 10 minutes. Marquell Fraser and Eddie Ekiyor paced Canada with eight and six points respectively.

France turned up the pressure defensively and slowed down the tempo of the game by getting the ball inside, earning foul shots to cut Canada’s double-digit lead to 32-26 at the half-way point of the second-quarter but Canada’s Ekiyor (11 points first-half) continued to inside and Daniel Cummings (10-points) finished the first-quarter strong as Canada extended the lead to 42-30 at half-time.

Team France continued to assert themselves inside and executed their half-court sets by dumping the ball down low to Goumbald who took over by scoring 10 points in the third-quarter. Canada was held to just 12 points in the quarter and late scoop lay-up inside by Kalif Young gave the Canadians a slim 54-52 lead as both teams headed to the fourth quarter.  France outscored Canada 22-12.

The Goubauld show continued in the fourth-quarter as the young NBA prospect added another eight points to finish with a game high 28 points and 20 rebounds on 13/19 shooting. France found their shooting touch from the outside to hold the Canadians at bay taking a double digit (10) victory and dropping Canada to 0-1.

Must Read:
Jamal Murray Raw Off The Bounce, Between The Legs Eastbay Funk

Ottawa’s Eddie Ekiyor topped with 14 points and 7 rebounds in the loss. Daniel Cummings provide instant offensive with 14 points on 6-of-8 shooting off the bench, Marquell Fraser finished with 10 points and Howard Washington Jr showed his shooting touch by going 3-of-6 from behind the arc for 9 points and 4 rebounds.

Team France out scored Canada 44-24 in the second-half and out-rebounded Canada 44-35 leading to 38 points in the paint.