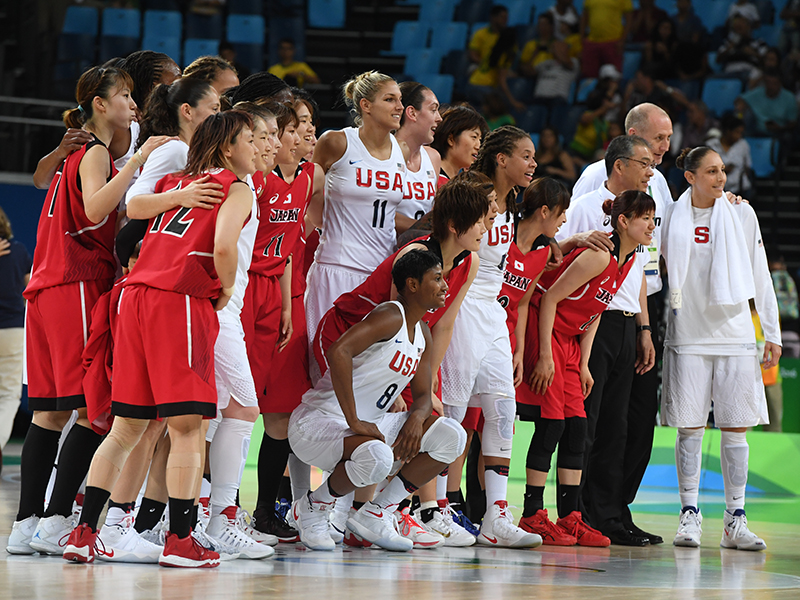 The game needed this.

The Olympics needed this.

The world needs this.

The enthusiastic hustle of a passionate Japanese team almost caused an upset against the dominant Team USA women’s side who only yesterday we hailed as, “the real dream team”. But after a close first half the best of the WNBA best broke away and ended up blowing out the national Japan team 110 to 64. Despite a knee injury to Ramu Tokashiki’s Seattle Storm teammate and basketball legend Sue Bird. Still, however with all the events that happened in this exciting quarter finals of basketball in Brazil none left quite as indelible a mark as what happened postgame.

It’s a typical trademark that each nations team together meets their outstretched hands to the sky in the middle of the green Rio court for a one for all huddle, regardless whether the contest ended in celebration or commisseration. But last night following this meeting of faith and a good natured feel to the end of the game despite the Asian sides resolute knockout by America (highlighted by Brittney Griner playing around and bringing everyone together), the Japanese and U.S. side got together as one to pose for a picture that will speak a thousand encouraging words to a million minds and eyes watching.

Time to make this a postgame trend.

As U.S. players like Elena Delle Donne and Breanna Stewart inter-mingled with Japanese players like Mika Kurihara and Asami Yoshida this show of solidarity in this snapshot of players posing side-by-side now serves as one powerful picture in this Snapchat selfie generation to quick to swipe past what’s important.

It’s especially needed in a time and Olympic tournament surrounded and shrouded somewhat in some areas by corruption.

Or a world today alll too plauged with the ignorance of sexism, racism and xenophobia, cruelly manifesting themselves in verbal and violent forms of abuse.

But to not live on your knees as you stand up for what you believe in.

The world is a lot smaller than we think, lets make sure our minds aren’t.

As these girls opened ours it didn’t matter if the fileing out audience in the stands were half-full. Everybody needs to see this. And in this digital day and age it’s amazing what one photo can do and how quickly it can travel.

We don’t mean to preach but we hope this photo piece can bring peace, love and understanding. And the coming together of one world.

After all isn’t that what this game and Olympics is all about?

From the back of the backboard on the slam cam you can see that the edge of the rim of these baskets in the Rio Olympic arenas read ‘A New World’.