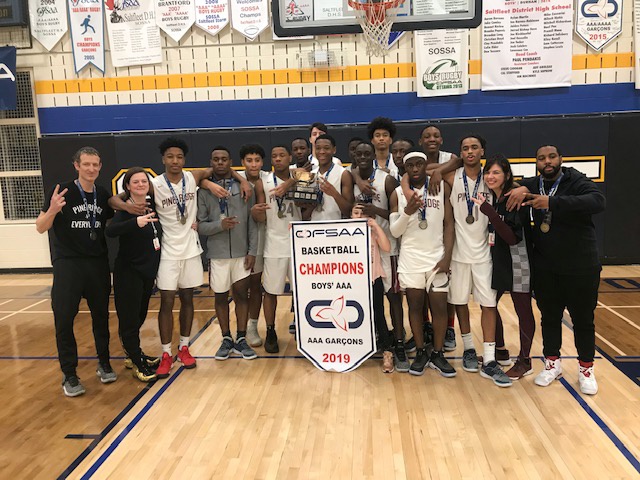 The previous possession, with the game tied at 48-48 all with 43 seconds remaining — 35-second shot clock winding down and the ball in La Salle’s premier guard Luka Syllas, Pryce determined to end his career as a champion pulled-up his shorts, started clapping and clamped defensively blocking Syllas shot attempt to give the Pumas the ball back with 9.3 seconds remaining via jump ball possession arrow rule.

Coming out of the timeout there was little to no doubt as to who was going to get the last shot, as Pumas’ head coach Cam Nekkers put the ball is senior guard’s hands delivering a magical march madness moment that will be buzzing for decades to come.

The gameplay was interrupted by a deliberate fire alarm nuance, causing a 15-minute delay.

Memories of Devoe Joseph’s final shot, game-winner to the defeat the Eastern Commerce Saints at the buzzer of the 2008 OFSAA AAAA Gold medal come to mind, only this time the trophy is going down south of Brock St. as Pine Ridge becomes the first LOSSA school to earn back-to-back titles of OFSAA’s top division since arch-rivals Pickering Trojans accomplished the feat in 2007-2008.

The seeding committee has released the final numbers and back in a familiar spot is the Vaughan Voyageurs, who despite losing 2014 Superstar Andrew...

Amongst the big names in the upcoming 2012 OFSAA AAAA Boys Basketball Championships is Jamal Reynolds of the #4 PineRidge Pumas who claimed the...