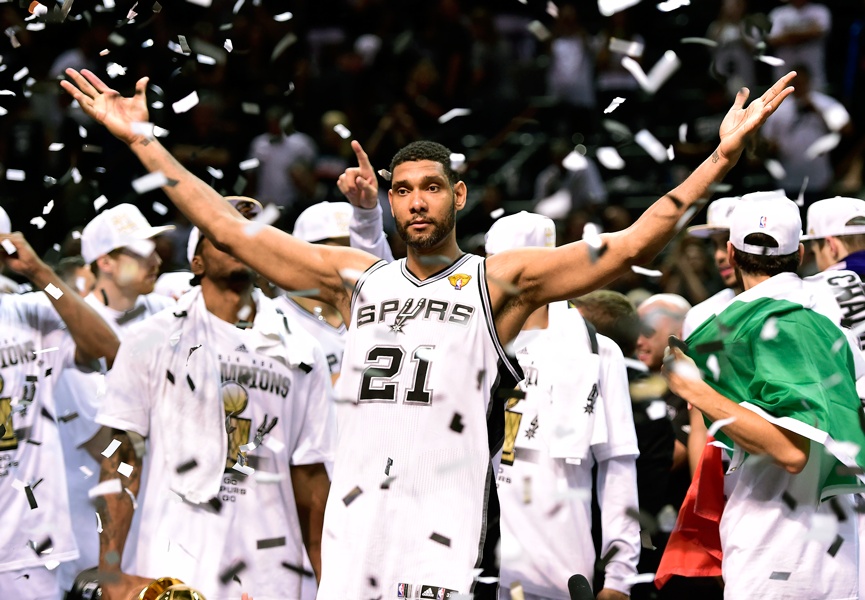 Don’t let the San Antonio Spurs or Kevin Durant’s injury let you rule out O.K.C. O.K.? The Miami Heat and the MVP have now left a seat for this team and Russell Westbrook to flourish, but it’s all on the best player in the league not named LeBron to see where this team finishes.

No longer Jail Blazers this new generation Portland team really is blazing a trail with the NBA standard one, two punch of the new Tim Duncan, LaMarcus Aldridge and the quicksilver speed of Damian Lilliard. Watch the City of Roses in the new garden bloom like Chicago’s Derrick. Even Jordan’s not shrugging.

As good and great as he is we don’t need to talk about Kevin. There’s no love lost here in the latest cold city to have a top forward jacked by LeBron’s talent taking. We see you Toronto. You’re still the north without the Bosh. Don’t freeze over Minneapolis. The twin city home of F. Scott Fitzgerald and Prince have some new twin peaks in former number one Cleveland Cavaliers, Canadian draft picks Anthony Bennett and Andrew Wiggins. Don’t worry they are used to the cold and Kobe knows Cleveland dumping Wiggins was as bad as when the Charlotte Hornets traded him and did we forget about one of the most sought after international draft picks in years, Ricky Rubio running the show? This team could be greater than Gatsby. It’s the new power generation.

Ty Lawson has a few Nuggets to chip to now that Andre Iguodala is gone. Still at least the Mile High City has those air conditions on their side. That should help them breathe.

Remember when Carlos Boozer and Deron Williams where the new Stockton and Malone? Well between Exum and Favors take your pick and roll because this team is as raw as Salt Lake. They did show greatness in signing a young kid suffering from leukaemia called J.P. Gibson however. For him the Jazz will play strong.

The Warriors don’t just live and die by the threes of Splash Brothers Stephen Curry and Klay Thompson. They thrive by it. Now the rest of the league will be left wetter then what’s under the Golden Gate.

Must Read:
Flash Goes To Hollywood For One Last Dance With The King

Chris Paul, Blake Griffin and the new dunking Jordan will keep this city lobbing and taking off like L.A.X. STAPLES doesn’t look like the Lakers home anymore but its time to cover up those ‘selfies’ in the rafters with some real banners.

Now the Eric Bledsoe drama is put aside…for now, it’s time for this star built like LeBron to show why his future is Sun burning bright like his most entertaining ballclub. Time to rise from those ashes Phoenix.

Now former Showtime dunk legend Byron Scott is running the show in L.A. things look much better. He says this team would be a playoff one in the East. No excuses its time to return to the West’s best. Kentucky draft pick Julius Randle and his new mentor Carlos Boozer are a nice replacement for Gasol but the future is on the shaky ground of super but streaky guards Jeremy Lin and Nick Young. At least Steve Nash is back…oh wait! No pun intended. We will all miss the father of Canadian basketball legend. He the north! Still despite all the negatives I wouldn’t bet against one of the all-time and still current best Kobe Bryant! Would you?

I have a fever and the only prescription is more cowbell. This team shouldn’t be this low and DeMarcus Cousins and Rudy Gay can attest to that. Where they end up in more ways than one remains to be seen. These Kings are still a long way from their throne.

In the leagues toughest division the team that once surprised the Spurs will be right behind their back. This time they aren’t surprising anyone even if they still remain as underrated as their point Mike Conley and big Marc Gasol amongst the league best. Lets not get started on the rest of the starters too like the always big Z-Bo. Now, they may have missed a trick on not signing Marc’s brother and former franchise face Pau Gasol. I guess they didn’t watch Spain this Summer. Still just like the old blue suede adage, if it ain’t broke don’t fix it. Thank you very much.

These Mavs are more than Dirk Nowitzki and Mark Cuban three balling their way to another championship cigar. Now with a matured Monta Ellis bringing stability as a sidekick don’t be surprised if these gunners make a run. He may be getting old but Dirk is still a premier player and the best of his type since Larry’s legend. Bird to O’Brien.

In the Texas Triangle losing Jeremy Lin takes away the big three, but Dwight Howard and James Harden are in their comfort zone now. All smiles and beards. Welcoming back the new Bruce Bowen veteran of the league Trevor Ariza helps to. Houston if these Rockets take off then the rest of the league has the problem.

The next great big man and star of this league Anthony Davis deserves more respect. Still sometimes stupid eyebrow jokes and tough divisions full of conference and championship contenders get in the way. Still Ant and the rest of the Hornets will still sting, especially with Doc’s son Austin Rivers. Fly Pelican FLY!