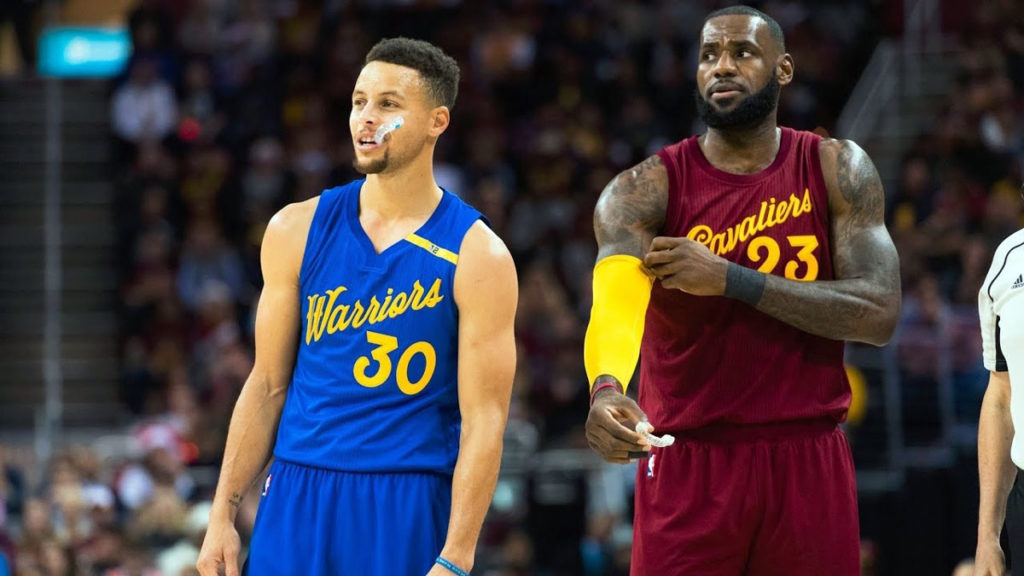 Back-to-Back! Back to the NBA Finals. It’s the rematch! The Golden State Warriors versus the Cleveland Cavaliers all over again. The best-of-seven. First to four games. The winner gets Larry. The loser…jokes on Conan O’Brien. It’s all a case of history repeating, but will the Dubs go back-to-back again? Or will the King finally claim his Ohio throne in his sixth straight trip to the castle of champagne or commiseration? It all depends on what type of heat Chef Curry has coming out that kitchen.

Stephen Curry vs Kyrie Irving – Almost the most evenly sided match-up of this series…almost. When Australian born Kyrie Irving goes off he can put your team down under like opposing centre Andrew Bogut goes down low. But have you seen Steph Curry go off?

Klay Thompson vs J.R. Smith – Streaks in this series could be decided by the slashers with the daggers. Whether it’s Klay’s day or if everybody is shooting like J.R. in Dallas than who knows? Still Smith is streaky…Thompson makes it splash brother.

Andre Igudola vs LeBron James – Time to take last years surprise Finals MVP off the bench for this one. After all Golden State did it in Game 7 against the Oklahoma City Thunder and look where that got them. Iggy can lock up ‘Bron for stretches and if ‘Dre double teams him with Dray it’ll be over. But then again at the end of the day, are you really going to stop the King? Especially an exiled one.

Draymond Green vs Kevin Love – Love lost last year for the Cavaliers was definitely a factor that hurt the King and all of LeBron’s men in their injury and insult plagued losing Finals. But hate all you want but do we really need to talk about Kevin here? If you think he’s going to get the better end of Draymond Green in the second most evenly matched head-to-head (almost) than you’re talking about as much crap as Dray does.

Andrew Bogut vs Tristan Thompson – Bogut may be the veteran and internationally like Washington’s Gortat the most underrated consistent force in his dying position. But pivot towards Cleveland on this one because Tristan Thompson is in the prime position to take over and have a breakout series. You always knew we were going to go with a Canadian. Advantage: Cavs.

Delly, Mo’, Shump, Channing, even Richard Jefferson. That’s nice but Golden State has Harrison Barnes, Shaun Livingston, Barbosa, Speights, Rush and even LeBron and the Cavs old friend Anderson Varejao. I don’t know between these two off the pine benches there may be nothing but splinters.

Steve Kerr vs Tyrone Lue – Steve Kerr may still be a relatively new coach…but he already has a championship under his belt after his rookie season and another ring on his finger. Sure even new Lakers Head Coach took some of the shine off his Dub plate as an assistant this year during his injury interim, but fellow former Laker Lue won’t. Despite his one of a kind playoff run. Tyrone may have been tough enough to tell King James to shut the f### up…but expect Kerr to treat him like Iverson did. And there’s your answer. Both backup points were spark plugs on Phil Jackson championship teams off the bench as players…and that’s probably why they make such good coaches. But ask the greatest of all-time, Kerr always knew how to win in the clutch.

Must Read:
New Lakers Keep Rising Against The Phoenix Suns