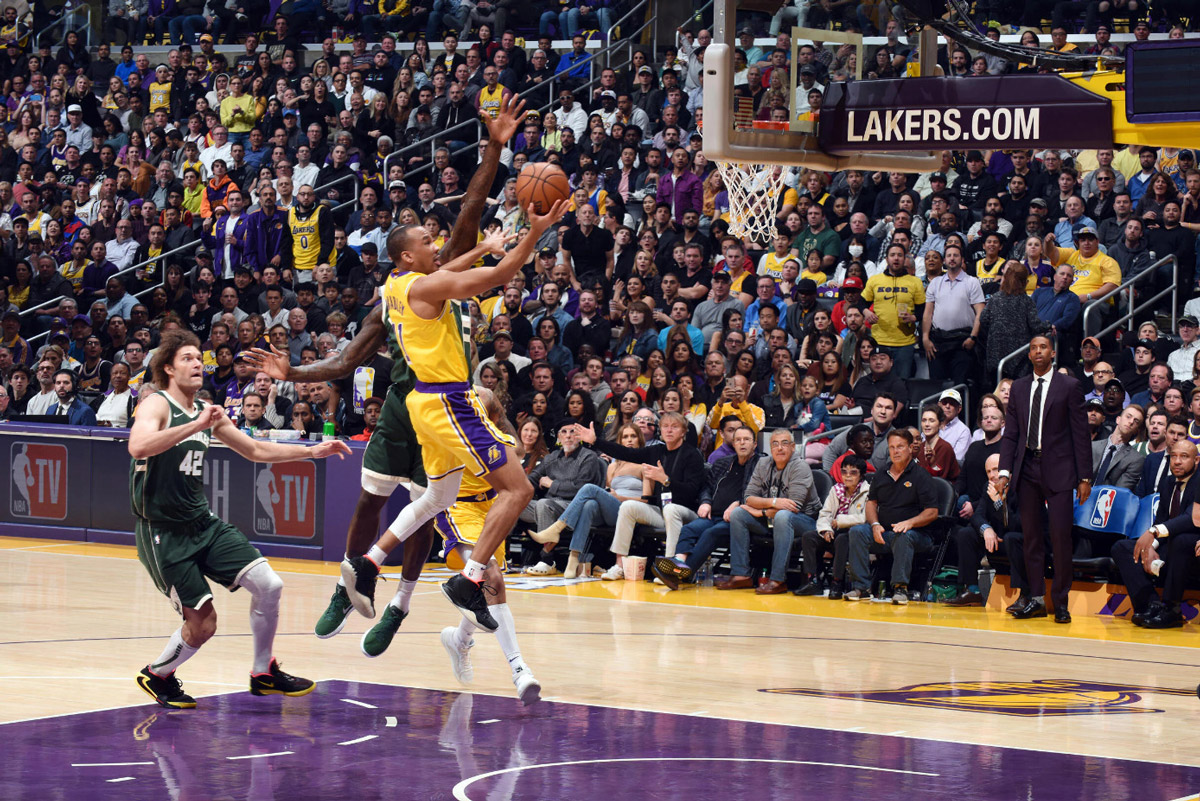 avery bradley is the lakers x factor of the year

Lunch money, bully ball, steal swiping the rock off Al Horford in a tug of war, like the football from underneath the foot of Charlie Brown. Avery Bradley mimicked a hands on, all ball steal like the one could have been Lakers draft choice Cam Reddish did against the Orlando Magic earlier in the season. It was the best of three big defensive stops by the Lakers in the last seconds of the first quarter as KCP finished the play. Dunking over all the defenders and Twitter trolls, before a buzzer beating ‘Bron block, en route to the Lakers processing the Sixers, 120-107.

Just like tonight in the Battle for Los Angeles against his former Clippers, raging against the machine that says his Lakers can’t close big games. With a Kobe 24 points off an Eddie Jones 6 from downtown Pico Boulevard to go along with two more swipes and one turnover when Patrick Beverly was whistled for one. I guess it really was the Clippers court tonight, until the Lakers turned it into their floor like their next home game.

The Lakers have been shopping the open buyout market these past few weeks after waiving goodbye to injured star DeMarcus Cousins (for now) and glut at guard Troy Daniels (now mining gold with the Nuggets in Denver). First they copped a Morris twin for the Spider-Man pointing battle for Los Angeles conference clash with the Clippers to come. And last week they served up Dion Waiters’ second chance in this league alongside LeBron.

But if team photo Rajon Rondo in coaching attire rumour has it, the Lake Show are far from done as they look to go on bargain hunting like they should have done with ‘Melo and Iggy and may just do, like everyone else should have with Jamal Crawford. Still if they want another downtown gunner they may take a shot at another LeBron band brother J.R. Smith. Still isn’t one wildcard enough to deal with? Like the Chinese exiled Michael Beasley and Lance Stephenson (they’re still available too).

Besides if the Lakers want more downtown at STAPLES like the Nokia Plaza then they need look no further than finding Avery Bradley on the wing like Danny Green. Avery Bradley has been bolting from the perimeter like an electric fence all season after being left open like 9-5. Charging up the second unit as the spark plug of the pine for the deepest team in the Association that’s still making moves like one, two steps.

Avery Bradley is more than the Lakers version of a modern day Bruce Bowen. The purple and gold haven’t had a player like this since Trevor Ariza. Avery is who the Lake Show wanted Josh Hart to be. This former Celtic who tore the ball from Horford like he was still one is the X-Factor of the Lakers this season. The unsung hero like all football fans will know defender Denis Irwin was for the treble 90’s Manchester United. The guy does more off the ball than Rick Fox used to and when he has the Spalding he sets the seams as good as he swipes them.

Sure this year has been all about A.D. on the way and the washed revenge season of the King. Let alone the redemption of Dwight Howard fit for a Hollywood ending and his twin peak lighthouse post on the block JaVale McGee (a fan favourite like ultimate hustle heart of team player Jared Dudley who gives out jerseys and Willy Wonka golden tickets like December 25th), or the cult hero and poster boy for hair loss heroes, the Alex Carushow.

If the Lakers take it all like the winners this year for Kobe it won’t be because of Waiters folding his arms, or even J.R. learning how to tell the time before 24 seconds. Instead it will be all about how former zero hero Avery clutches the ball or clings to you on D. Making the stops, shot and big plays on either end of the floor like X and O.

And it will all be just like taking candy from a baby.