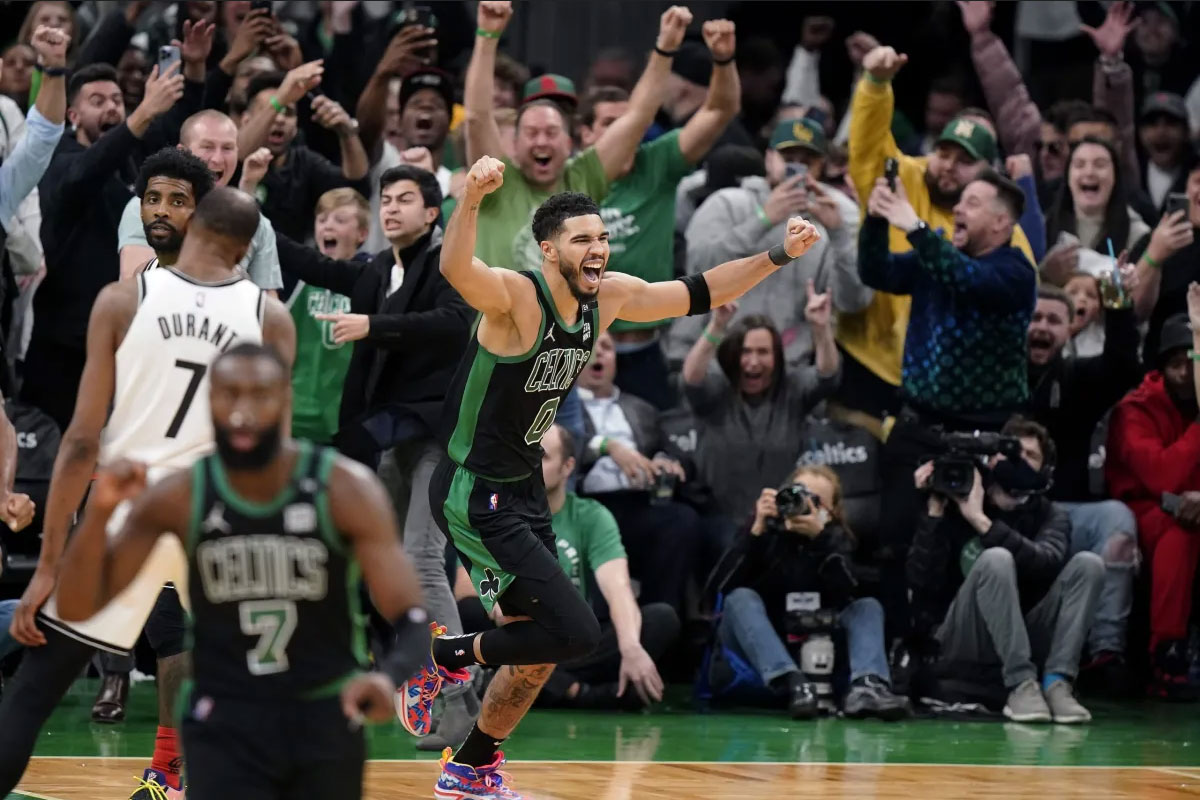 Believe in Jayson Tatum as Boston's next classic Celtic

First he came at the King as a kid.

Then last week he defeated Durant as a grown a## man.

Now the next stop is the Bucks in Milwaukee. Where Jayson Tatum looks to dethrone the reigning champion and NBA Finals MVP Giannis Antetokounmpo. Especially with newly minted defensive player of the year Marcus Smart as his wingman. Putting the clamps on the Greek Freak.

If you don’t think the Celtics are a contender, then maybe you can’t see the banners up there with the spirits for all that Red smoke.

Because Tatum wants it.

And so many more names that the NBA’s most storied franchise is running out of jersey numbers with all those retired in the rafters.

The zero is about to take its place.

Let’s not ignore the great Jaylen Brown either, who forms a P-Double and Antoine Walker like dynamic duo with Jayson. And that’s the truth. Jaylen has the ability to be not only a legend, but a social justice one too. Being the best in Boston at pushing for the lives that matter since Bill Russell was a civil rights activist in the years of Ali, Malcolm X and Dr. King.

In a time that sees us lamenting the legacy in the making of young guns like Ja Morant and Anthony Edwards (and why not?), Jayson Tatum is right now. He’s not 19 anymore. Instead, this postseason he enters the NBA elite like LeBron, Kevin and Kyrie.

The future is here like the ‘I Never Liked You’ album.

Must Read:
Kobe Bryant Scores 32,000 Points As The Lakers Get Their "Swag" Back

Didn’t he just sweep the last two with a broom as the Celtics cut down the Nets like March Madness this April?

As for the closest GOAT to MJ, his Hollywood squad’s last dance wasn’t even saved for the play-in. In this leagues 75th anniversary, the only postseason drama for the Lakers comes with the logo taking a case against a HBO show to the supreme court.

On the superior parquet in Beantown, the C’s are putting on a show.

Buzzer-beating. Clutching at hero narratives with Kyrie Irving playing villain. Tatum taking it to Durant reminds me of a baton pass for these former Olympic teammates. Like the way Magic described the new MJ doing to him in the death of Showtime. It’s his game now. But it’s all love in hugs. Real recognises real, and the game sure is familiar.

29.5 points, 7.3 assists and 4.5 rebounds in four resolute games next to KD’s 26.3, 6.3 and 5.8 and a defence as stifling as the heat we’re about to see come summer. Or what Miami just did to Trae Young. No need to silence the crowd. Jayson is screaming now.

And you can hear it all the way at the top of the Garden’s nosebleeds. Banners blowing in the wind waiting for one more to be hung up like laundry.

It’s about to be a wash.