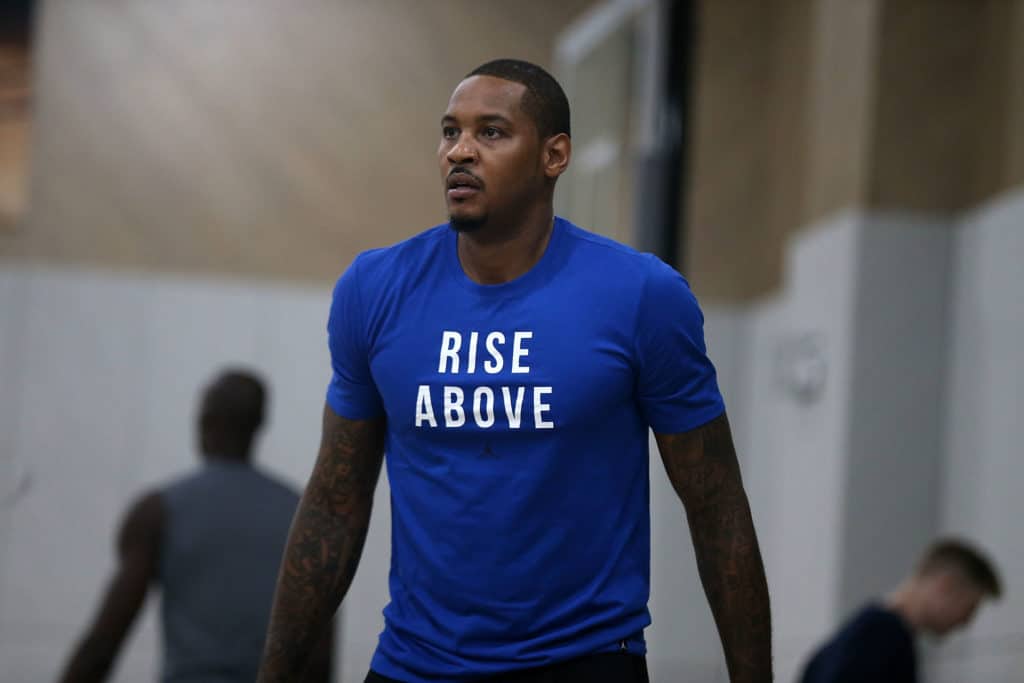 Blazing a trail back to the NBA Portland land Carmelo

Catching the ball out of bounds as a spectator courtside. Carmelo Anthony is no longer dribbling the ball to the baseline in street clothes. About to put up a shot before smiling and passing it to the referee like, “just kidding!”

‘Melo is back and Twitter just won’t calm down.

He deserves the character.

Way to reverse the trends Carmelo.

No New York state of reunion. Or things to do in Denver when your career is almost dead for the Nugget golden era icon. No chance to finally wear that Atlanta Hawk jersey they especially made for him. No banana boat ride with LeBron in Lakeland for the purple and gold to finally get another Anthony they seemed forever linked with like arms of the father of the bride. No matrimony to toast with wine friend Chris Paul back in Oklahoma (although the Thunder and roaring Rockets wish they could have him now) either. But the man who was wedded to rumour for this last year like he always will be the game has ended up blazing a trail back to the NBA with Portland. Back in bloom in Rose City as ‘Melo shows with Rip City it’s not R.I.P. to his career, but the criticism that came to whether he was still capable on court.

The hoodie and headband is back.

Just look at his t-shirt in the above picture. Soaked through with sweat in just another practice run were he just wouldn’t give up or in.

Sure it would have been great to see him basketball befriend the King rival he rookie entered the league with for a true Hollywood end. The Basketball God storybooks would have loved him to retake his Knick throne as the Ewing, Bernard, King of New York even more. But now he’s blazing with the PDX best backcourt duo of Dame Lillard and C.J. McCollum. Joining All Star, legend vets like Pau Gasol to help this Wild West team back to the contender saloon. Last time he left the league, ‘Melo had averages of 13.4 points, 5.4 rebounds, and 0.5 assists per game. With percentages of 40.5% from the field and 32.8% from three. And Houston thought they’d have no problem giving him up and keeping CP3 and James Harden like OKC losing an OK3 of him, Westbrook and PG3?

They said he wasn’t in the game like A.I. But he’s a ‘Champion’ like Young Jeezy on a Nicki Minaj song with Nas and Drake. “Big ballin’ like Jeremy Lin (doing so in Beijing), ‘Melo!”

What a difference a year makes.

No ‘Melo yellow. Or Syracuse orange in N.Y.C. But none of that matters. The contract in Oregon is non guaranteed. But call it a comeback like Dwight Howard back in Lakeland. And you’ve seen what a couple of big dunks, blocks and games has done to his big man Laker legacy. After it looked like he was blackballed from the NBA, let alone Hollywood. But you can always flip the script and bring your big name back. And when it comes to the back of your jersey. Not many come bigger than number 15 or 7 with his new seal.

He’s one of the greats like is a N.Y.K. G.O.A.T. This generation, or the game all-time. It’s time to recognize what the name means. This is not redemption. But a revolution in reunion of a legend and the game he’s given everything to. That’s finally giving him what’s owed to him.

The respect he deserves.

You can’t keep a good man down.

Hoods up for this marathon. The hate is gone like a sprint through social media.

All for the love of the hardwood.

Stay ‘Melo. Because your boy is back like he never left.

Don’t call it a comeback…he’s here to stay.