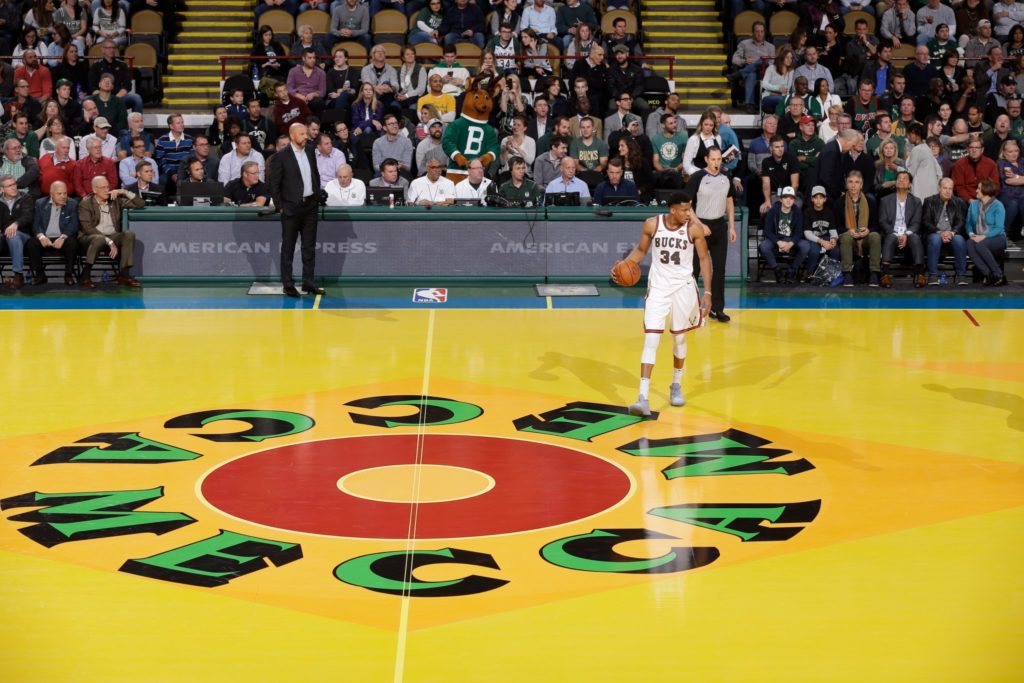 The Bucks Stop Back At The Mecca

All praise was due to the past last night when the Bucks paid tribute to their history as they hosted the storied Boston Celtics in Milwaukee’s Mecca.

And although they lost that game 96-99 to Irving and all of Kyrie’s men, it was their future the C’s and everyone in the L should fear like the deer itself as the Bucks alpha and alphabet Giannis Antetokounmpo spelt M-V-P yet again as he made history all of his own right then and there.

The Greek Freak who is now a world class superstar as famous as a mecca like M.S.G. did more than MVP as he became the first player in NBA history to average at least 35 points, 10 rebounds and 5 assists over the first 5 games of the season and total highs of 175 points, 53 rebounds and 28 assists in the box score of the first five.

But Giannis’ 28 points, 10 rebounds and 7 assists weren’t enough to best a Boston side with one of their new franchise stars Gordon Hayward sidelined with a grusome ankle injury from opening night for the rest of the year and season. Five starting balanced Bucks banking 15 or more in the books wasn’t enough either for a team that gave up the peach 17 times too many. Not enough for Kyrie Irving’s 24 and 7 assists. Not to mention his “how does he do that” handles that drive, need and deserve their own statistic of efficiency for our amazed appreciation. It wasn’t enough for another relatively speaking new Celtic franchise cornerstone Al Horford’s team high 27, complete with a Brook Lopez center rivalling 4 for 5 from deep downtown as the old Irish rolled the rock on the road.

Avenging a 37 point pruning from Antetokounmpo in their Garden last week, the Celtics mowed down Milwaukee’s Mecca nostalgic trip to the UW Panther Stadium in Wisconsin as these cats clawed these Buccaneers by the animals antlers.

But in the same nostalgic night when everyone else was binge-streaming the new 80’s retro ‘Stranger Things’ show in the Netflix new age, hoop head purists had this seventies hardwood classic straight out of the Mitchell and Ness wardrobe playbook. And everyone in attendance had fun on this retro night all the way to Indiana legend Reggie Miller calling the play-by-play commentator shots. It was an evening for dreaming of the good ole days. As the team with the best Harley Davidson chopper sponsered Nike unis in the L took it back down histories highway to the throwback on a court as colourful as the Spectrum in Philly, or those old Denver Nuggets, Atari 8-bit looking ugly/beautiful jerseys. All the way back to the Big O days when deer mascots wore green M varsity jumpers (just like last night) and Kareem Abdul-Jabbar was called Lew Alcindor and wasn’t even a Laker.

But like a dunk of the year candidate that just wouldn’t go down for the MVP alphabet, the Bucks just couldn’t get it done for their history even though they found all new ways to write in the record books.

But just wait until Milwaukee turns all those numbers and letters into more hundreds and W’s and these Bucks and their lead steer antler Antetokounmpo will well and truly see the Mecca like hoop heaven.