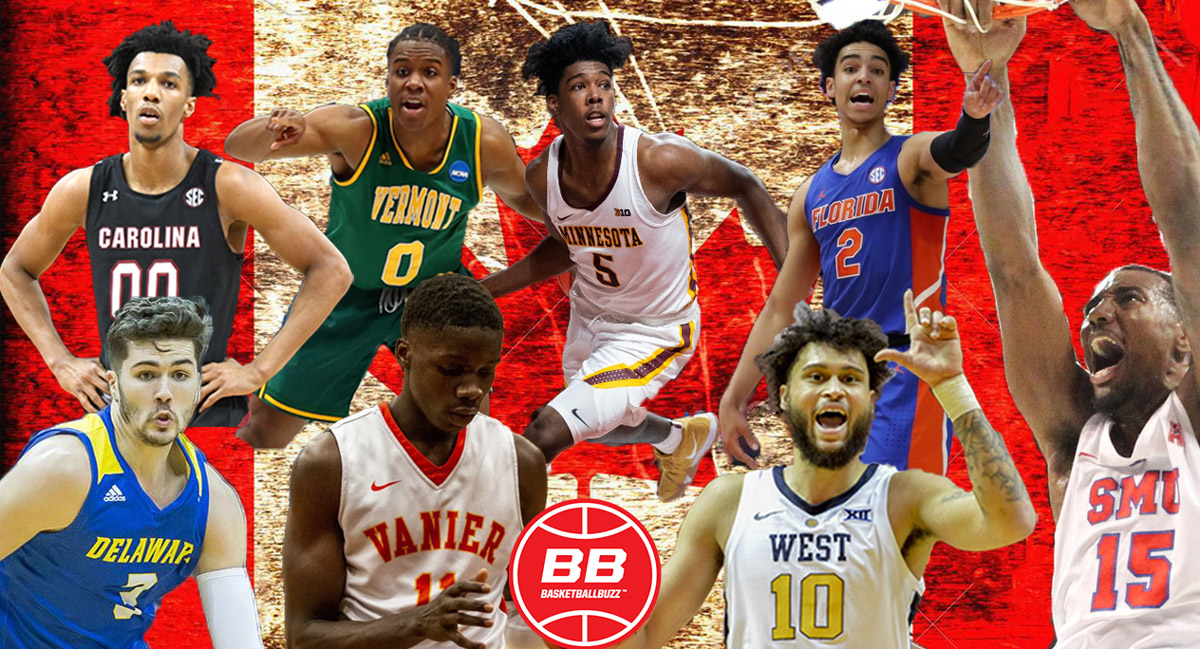 The 2019-2020 NCAA men’s basketball season has come and gone without it’s historic grande finale — cutting short the opportunity for many student athletes to live that one shinning march madness moment.

Widely regarded as a down year for Canadian basketball players in the NCAA, specially compared to a year ago, when a record number of Canadians declared and got drafted into the NBA.

A testament to the growth of the game of basketball across the country can be easily spotted by the nation’s tenth consecutive season with a Canadian basketball player getting the opportunity to shake the commissioners hand and the ninth straight year with a first-round pick.

An unbelievable stretch that dates back to 2010 when Andy Rautins was drafted in the second-round and further accelerated when Tristan Thompson and Cory Joseph became the first Canadian duo to be selected in the first-round of the NBA Draft from the University of Texas Longhorns.

As the popular adage reads, “what goes up, must come down” and based on all NBA draft board projections, the beginning of the new decade looks to be the year that finally flattens the Canadian NBA Draft curve and ends the long-awaited, and much anticipated upwards streak.

2020 will go down in the books as the calendar cycle that brought the sports world to a sudden halt in self-defense of public health and the battle against the COVID-19 virus pandemic.

As a result, a combination of experienced, proven and well traveled NCAA basketball talent make-up the complete list of Canadian’s who have declared for the upcoming 2020 NBA Draft.

Nate Darling, Marcus Carr, Jermaine Haley, Isiaha Mike were the first players to announced their intentions to enter the draft. All four players have one common similarity, transferring away from their original commitments — with Darling going from Alabama-Birmingham to Delaware. Carr went from pledging allegiance to the Pittsburgh Panthers’ to Minnesota. Haley started out as freshmen at New Mexico State and Mike from Dusquene to SMU.

Lastly, a pair of SEC guards also beat the declaration deadline as South Carolina’s AJ Lawson and Florida’s Andrew Nembhard made their announcements to bring the total to eight Canadians.

All players, with the exception of senior Jermaine Haley have opted not to hire an agent, keeping alive their hopes of returning to the NCAA.

Darling, has a chance to become the first Canadian-born, Nova Scotia basketball player to be drafted into the NBA. Naturalized Canadian/Ghanian citizen and former St. Mary’s Huskies star William Nkoju was selected 41st overall by the Indiana Pacers in the 1994 NBA Draft.

Darling, a Bedford native emerged as the top Canadian choice at the collegiate level — torching teams’ with his smooth looking three-point shot on his way to the fourth highest scoring season by a Canadian in NCAA history.

“After consulting with my coaches and family I will be entering my name into the 2020 NBA Draft while maintaining my eligibility. I am very excited for this opportunity as it has always been a dream of mine to play at the highest level.” announced Darling via his twitter account.

A combination of some of the highest scoring outputs by a Canadian rapidly raised Darling’s stock, boasting his 21 points per game average into 18th best in NCAA Division I. The Canadian sharpshooter scored 20-plus points in 17 of the Blue Hens 34 games, including four games with over 34-plus points. Furthermore, Darling’s 672 points were seven shy of the school record, his 107 three-pointers were sixth most in the nation and fifth all-time by a Canadian.

Regarded as one of the NCAA’s best basketball shooters of the decade, Edmonton’s Stephen Sir holds the record for the most three-pointers made by a Canadian in a NCAA season with 124 in 30 games during his senior year at Northern Arizona in 2006-07. Tristan Blackwood buried 122 triples in the same year for Central Connecticut. Sharpshooter Brady Heslip knockdown 118 triples during his final season with the Baylor Bears. Jamal Murray nailed 113 triples in his lone season at Kentucky, followed by Darling’s junior season. Stephen Curry is the all-time leader with 162 triples in one season.

Must Read:
King LeBron Leads Cavaliers To The Promised Land

Most three-pointers by a Canadian in NCAA single-season

Excelling at the point guard position in the NCAA is one of the toughest tasks in college basketball. Canadian Marcus Carr (Toronto, Ont.) averaged 15.4 points, 6.6 assists, 5.3 rebounds per game for the Golden Gophers and was excellent in his first-season with the Maroon and Gold setting a team record with 203 assists in 31 games.

The 6-foot-2, 195-pounds guard wrapped up the regular season second in the conference and eighth nationally in assists per game, and tied for second with an assist/turnover ratio of 2.5. The Toronto, Ontario native led the SEC conference in minutes played, starting every single-contest, averaging 37 minutes per game. The junior guard reached double-digits in scoring in 23 games including eight 20-point outings and four double-doubles.

“After speaking to my family, we have decided that I will be entering my name in this upcoming 2020 NBA Draft. My intentions are to stay in the draft and pursue a professional career in the NBA. However during this process I will be retaining my college eligibility status by not signing with an agent.” shared Carr via Instagram.

“I am looking forward to receiving valuable information. Going through whatever process this unique draft year does include, and ultimately making the best decision for my family. It’s always been a dream of mine to play in the NBA and I would like to thank God, my family, and my coaches for putting men in this position. No matter what happens, my time here at the University of Minnesota has provided me with an unbelievable opportunity and it will forever hold a special place in my heart.”

There is no doubt Isiaha Mike’s physical attributes check all the prototypical NBA shooting guard check-boxes. At 6-foot-8, 215-pounds, the junior guard/forward from Scarborough, Ontario is coming off his most productive NCAA season — averaging 14 points, 6.3 rebounds, 1.8 assists and 1.2 steals per game in 30 games for the Mustangs. Mike began his collegiate career with the Dusquene Dukes and transferred to a SMU program that has helped him polish his game and put the high-flying and well-spoken 23-year-old on the NBA radar.

“After speaking with my coaches and family, I’ve made the decision to enter my name into the NBA Draft. I’d like to thank everyone who has supported me on my journey, because I wouldn’t be who I am without all of you.” shared Mike via twitter about his intentions to pursue his ultimate dream.

Representing the west coast is Jermaine Haley a senior guard from Burnaby, British Columbia. The oldest of the four declared players, Haley averaged 8.9 points, 4.3 rebounds and 1.9 assists per game, earning 24.3 minutes for a Mountaineers team that finished the season with a 21-10 record.

“What an incredible journey this has been Mountaineer Nation…”You took a kid from Canada and made his dreams come true. It is with a heart full of gratitude that I will be entering the my name into the 2020 NBA Draft.” announced Haley via Instagram.

The path to the NBA is not always a straight-line and if one thing has been proven, is that no matter what collegiate school you attend — if you can ball, they’ll find you and you’ll get your shot. Due to it’s proximity, the Catamounts have traditionally, been a hot destination for Canadian basketball prospects — dating back to 2006 when Sarnia’s David Hehn was sinking treys against Syracuse in the NCAA tournament.

Stef Smith is the latest Canadian to follow in the footstep of many others who have come before him. The junior guard from Ajax, Ontario has continued to work on his game, improving in each of his three seasons at Vermont — going from playing just 11 minutes per game in his freshman to starting all but two of the Catamounts 67 games in his sophomore and junior campaigns.

It’s not everyday that you hear of a local CEGEP/CCAA Canadian basketball player declare for the NBA Draft. Originally, slated for a slew of NCAA visits to the likes of Michigan State, Kansas and a long list of other top shelf suitors — the 6-foot-5 combo guard opted to declared for the draft.

“I sent in my paperwork, but I am keeping my options open as far as college,” Mane told ESPN. “I am not planning on hiring an agent right now. I want to hear directly from teams. If I can get a guarantee I’ll be drafted, I will probably need to think about staying in.”

The two-time Canadian Colleges Athletic Association (CCAA) All-Canadian was amongst the top Canadian players at the 2019 FIBA U19 World Cup. The 19-year-old guard averaged 11.7 points, 4.4 rebounds and 3.1 rebounds in seven games in Greece.

Injured for most of the 2019-2020 CCAA basketball season, Mane will attempt to become the first Canadian basketball player drafted directly from the CCAA to the NBA.

The Cheetahs, a traditional Quebec basketball powerhouse have claimed the Canadian Colleges Athletic Association Basketball championship twice — earning gold in 1987 and most recently in 2011.

The writing has been on the wall for Toronto’s AJ Lawson. Two years into his NCAA basketball collegiate career, the 6-foot-6 guard has shown flashes of brilliance under the guidance of head coach Frank Martin.

Lawson paced the Canadian U19 national team at 2019 World Cup with 16.7 points per game including a game-high 31points on 6-of-10 shooting from downtown. Canada fought off a pesky Senegalese team to advance to the quarter-finals.

Lawson hit double-digits scoring in 23 of South Carolina’s 31 games — upping his field goal (45.1%) and free-throw (66.7%) numbers from his freshman campaign to 49.4% and 72.4% respectively. The rebounding and assists numbers took a slight dip as the Canadian contributed with 3.7 rebounds and 1.9 assists to a Gamecocks team that concluded the season with a 18-13 record.

A true point-guard in every sense of the word — Andrew Nembhard put together a respectable sophomore year by leading the Florida Gators to a top four finish in one of the toughest conferences in the country with a 11-7 SEC conference record. The Aurora, Ontario guard once again led the Gators in the assist column with a healthy 5.6 dimes per game to compliment his improved scoring ability which increased from 8 points to double-digits at 11.2 points per contest.

The scoring bump can be attributed by an increase in field goal attempts from 7.1 to 9.5 shots per game. The Canadian guard recorded a career-high 13 assists and finished the year with two double-doubles — including a 21 point, 10 assists road win over AJ Lawson the Gamecocks.

The 2020 NBA Draft is scheduled for June 25, in Brooklyn, New York. Underclassmen have until 5 p.m. on June 15 to withdraw their names and keep their NCAA basketball eligibility.