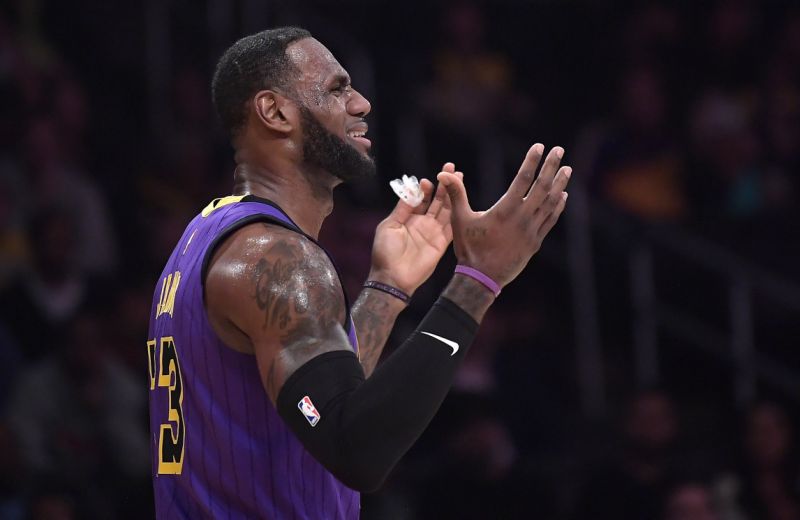 If you didn’t know that with the ‘Luke Cage’ like Notorious B.I.G. red portrait, new SLAM magazine classic cover with the crown that in Brooklyn, D’Angelo Russell was the new King of New York, now you know. And last night his crown with a gauntlet gem of infinity stones took the L.A. King, checkmate, endgame. Showing this games chess not checkers.

You passed your ‘Training Day’ kid.

You want to talk about karma Lake Show? Because this is more than a lesson learned, this is a fitting end to this courts chapter wrote by the Basketball Gods under the heading line, “what goes around, comes around”!

Revenge is a dime dish best served ice in his veins cold.

And now you’re season is done as the jello is jiggling in the refrigerator Chick.

But as D’Angelo had 21 points to go along with 13 double/double dishes as he set the table for what we thought would be his West logo 44 career-high smash, everyone ate as the Nets had a balanced diet and attack of the twine as they coasted the Lake Show 111-106 in a close game, albeit one that always looked like theirs. Another former Laker in big man Ed Davis got his with 14 and 15. Whilst sparky Spencer Dinwiddie got 19 and 3, DeMarregards Carroll 15 and 6 and big Jarrett Allen 13 and 11 as all the Nets went harder than his ‘fro. But the high man was Joey Buckets with 26 points. Including 6 for 8 from downtown New York as for some reason L.A. thought leaving Joe Harris-this year’s three point shootout winner at the All Star in Charlotte-as open as stores on the Dolly Parton, 9 to 5 shift wasn’t going to leave them crying like ‘Jolene’.

But now the Nets have taken their man it’s nothing but tears. With all due respect to George Gervin, D’Angelo Russell is the next generation iceman. As finger to lips he silenced STAPLES like go clutch Fish against the Sixers. Although with his now trademark matured grace and humility he played down “poetic justice” requests in his postgame presser, saying it was all just a “business game”. The most passionately driven guard since Iverson. And he just stepped over the Lakers again, eliminating from the playoffs as Luke Walton watched his job go to Lue from the sidelines. Magic said this kid couldn’t lead as he gave the Ball to Lonzo. But now everyone is getting played by this big baller, as this number one leads his cutting Nets to the playoffs as an All-Star and Team LeBron end up being all for show. As number 23 will not be raised to the brackets for the first time since 2005. Let alone the finals for the last decade gone. And with what was a sinister sixth straight postseason party miss for the Lake Showtime, the last time James missed the playoffs Netflix sent you your films in the post one by one.

Must Read:
It's Beginning To Look Like An NBA Christmas

At least they have plenty to stream at their service this early Summer.

With all the jumbotron tributes from teams to past players right now (Isaiah *cough* Thomas, LeBron), the Lakers should play one of D’Angelo’s ice clutch shot the day after his grandmother’s death that won the game for the Lakers (unlike the castles bricks here tonight) as he fell into his family’s arms uptop the stands. And just end it with one word that says more than thank you…

I feel like Brad Pitt’s war wounded character with my ‘Fury’ for the team I love here. But like he says, “I’m trying to teach you something”. LeBron and the Lakers needed this. A season that started in bloom in the sunshine of California has turned to the Autumn leaves that have fallen to a crisp. Injuries were the problem, but then the reason came with the added insult of the Davis drama. And now this reality show is in disarray and it all came from Magic, not LaVar Ball. Imagine seeing that one in a crystal ball last Summer. The Zubac, Bryant (Thomas), Nance Jr, Clarkson, Russell and Randle-less Lakers need to learn from this and realize their formidable future of Lonzo, Kuz, Hart, Brandon Ingram (who is still two years younger than Lo) and maybe even Moe is not worth one man. Whether that’s Anthony or LeBron. Even a team-less Carmelo was out off joining this assembly line that has meme-d its way through good guys like Mike Beasley. This team could still be something (I mean this season like last nights City Edition threads has been ugly but somehow still appealing), ‘Stranger Things’ have happened, but right now it’s in the upside down with no sign of Winona Ryder’s Christmas lights. Not even a decoration for a declaration.

Kobe in a ‘Get Up’ interview for ESPN promoting his new ‘Wizenard’ book series said that this game was about more than stats and about feeling, energy. For decades they’ve said this game is like jazz. And just like that form of music, the notes are all there, but it’s what you do with improvising them that counts. And the only number and note from the Lake Show you need to know last night (apart from our energy high guy of the season McGee’s Kareem like 33 with the hook. A career best along with one in rebounds with 20 off the shot rim and glass, to go along with 6 blocks), besides from the big chase down block on Lo Russell that was vintage Iggy to go along with 25 points, is that with his 8th turnover the King toppled to the ground as his crown slipped on a crucial possession. It’s kind of symbolic of how his Hollywood season has aged and played out. But one of the best players in the league, if not the best will be back on his throne in the hills and he’ll have plenty more Kawhi or Kyrie knights with him and these young princes.

But last night the one that they exiled showed he could make a king bleed from the borough to the big city. D Loading just needed President Johnson to please wait. But with his own Magic cast last night, Russell showed he was fully charged now and ready to go like the Lakers never should have told him to. Because the only place in this postseason they’re going now is home.

Ice. In. His. Postseason.