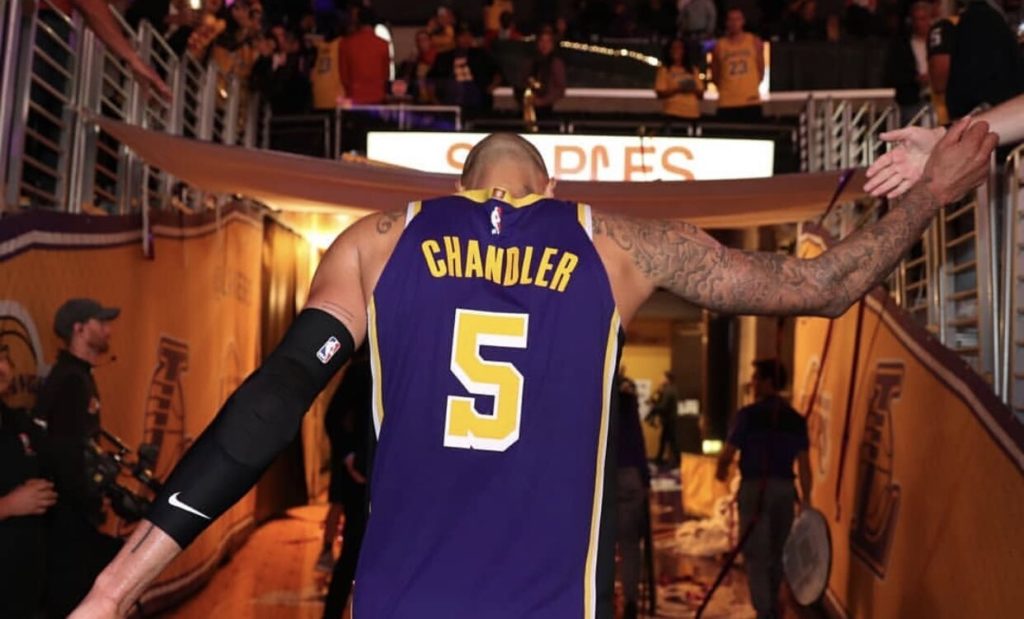 Could Tyson Chandler BE Anymore Of A Front-court Knockout For The Lakers?

Hip-hop superstar and hoops superfan Ice Cube in a black and white preseason promo for the purple and gold’s 2018/2019 season said, “I’ve seen some good days”. YES Cube! Like when the Lakers beat the Supersonics right?! But in these days of Thunder how’s this for a Westside connection, straight outta Compton, all the way home in the city of stars?

T.C. is back in L.A. and we ain’t talking about Hollywood’s Cruise.

Tyson’s fury won the game for the Lakers last night.

And it was just a day after Tyson Chandler could barely get a practice session in like Allen Iverson at an infamous press conference. Following being brought aboard by the Lakers, following his buyout of Phoenix’s Pacific. He suited up for the Lake Show and made a big stop to make sure King LeBron’s new Hollywood reality show would go on this season.

His ninth rebound in a James jersey 23 minutes of burn was the brightest from Arizona to California. As the former Sun set the game for L.A. against their former Minnesota home. After Derrick Rose’s blooming 34 points looked to threaten his new concrete cemented career-high of 50, a missed clutch bucket was batted away safely into the backcourt by Chandler with clutch gusto. Violating any chance of the Wolves’ bark being worse than their bite.

And as the L.A. Lakers won 114-110 at home in their road jerseys, the Minnesota Timberwolves should have thought about wearing their new Nike ‘City Edition’ Prince jerseys if they wanted to reign over the purple.

It was all gold though in California for the King’s men thanks to the K.O. from Tyson. Who in joining LeBron out in L.A. gives the Lakers the only team in the association who have the only two players left in the league who made the skipping college jump of entering the NBA straight out of high-school. And what a graduation this was for the new number five last night. The homecoming champ back in L.A. showed up on more than the box score. Showing out in his promise to take pressure off of the King. His brick-wall, bodied up, rope-a-dope defence on superstar Karl Anthony-Towns was a frontcourt forcefield that has already made the Twitter trends for its testament to toughness.

And this is EXACTLY what not only L.B.J. but L.A.’s JaVale McGee needs in back-up. Especially as they miss the muscle of Power Forward Julius Randle. The dunking and blocking, hustle machine of energy has been bringing it this year like he does in the weight room. The only thing in the gym more than McGee is sweat itself. And all of it probably belongs to the man who LeBron James says isn’t in the ‘Defensive Player Of The Year’ conversation…”he is the conversation”. We’ve come along way since Instagram blocks.

And although this doesn’t sound so promising for the potential of young big Ivica Zubac the Lakers need this veteran presence right now for tutelage and duty. There’s still time for the kid Zupac. And talking of time, Luke Walton’s job shouldn’t be on the line. Especially this early. He’s a great young coach for this team who will grow with the next generation if he’s left to do that. The answer isn’t to quit or ditch at the first hurdle or obstacle. Let’s stop disrespecting Laker legends…okay breathe. Back to it. We were only just talking about him on here last week as the Lakers scorched the Suns. And we can’t wait to see this workhorse flush his double-down, two-handers once he really gets going now he’s got the jitters of his first game out the way. Having a table of delicious dunks served by the rotating likes of Ball and Rondo is a seven footers dream in the middle. But having the former ‘Defensive Player Of The Year’ Chandler serve alongside decorated star vets like Rondo, Beasley and Stephenson backing up the future franchise youth of Ingram, Kuzma and Ball (already good enough to go by their last names only…wait for their first Lonzo and co) is the stuff dream teams are made of. And that’s before we even get to Hart or Pope.

Must Read:
On Christmas Day, Lakers Deck The Warriors With Balls Of Hollywood

Back in the Baby Bull days of Chicago trying to find their way in the post-M.J. days, Chandler and Curry where the Chandler and Joey of big-man basketball and frontcourt friends. But the twin towers of David Robinson and Tim Duncan they were not. Even if it was billed as a big Shaq and T-Bot upgrade. Curry kept eating, but with the ball fed in the post Chandler still had that bing. Growing out his beard and becoming one of the best bigs in the L under that shaved dome for years of his certified career. The former All-Star and number two pick has been a journeyman of sorts, jacking all trades and being part of them over 19 years for the 36 year old. Playing from everyone from both the New Orleans Hornets and the Charlotte Bobcats. To the New York Knicks and the Dallas Mavericks…twice. But now 18 years after being drafted but then traded by his hometown neighbour Clippers, there’s no place like his Los Angeles home.

Tyson has gone for Olympic gold with LeBron. But now in homecoming purple it’s time to ring the changes with the King.