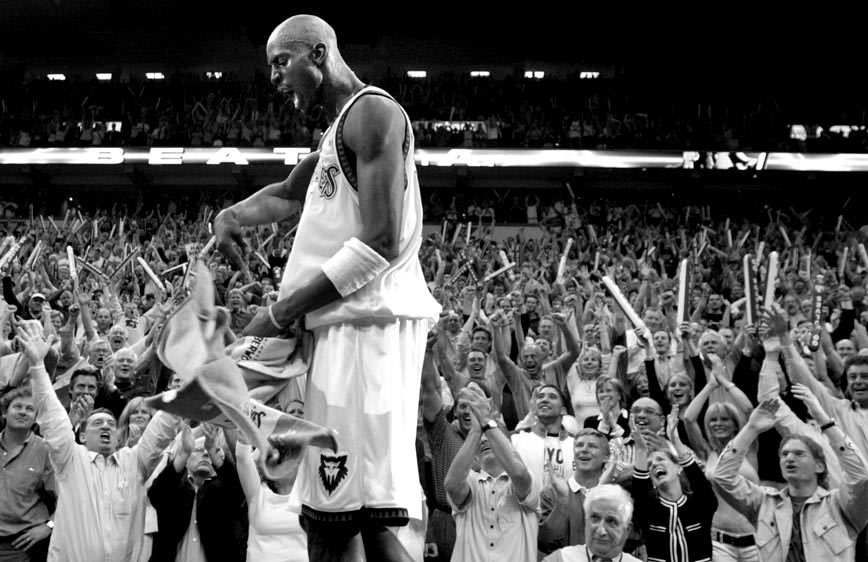 ‘Da Kid’ Kevin Garnett Has A Big Ticket Back To Minnesota

Decisions, decisions! Forget LeBron’s return to Cleveland, this homecoming story could hit the heart with even more passion.

When Kevin Garnett burst onto the scene with all his trademark energy and enthusiasm, Da Kid hustled into hoop hearts as this writers favourite player, even next to my Los Angeles Lakers’ Kobe Bryant (you can imagine how disappointed I was when that purple and gold dream trade didn’t go down). For 12 seasons he was Minneapolis heart like the purple reign of Prince as he put the whole Minnesota Timberwolves franchise and fans on his power blocking and dunking shoulders.

He is definitely the Wolves best player of all time and his name and that number 21 will all for sure find its pride of place in the old Target Centre rafters. But, wait! Hold the ceremony. Don’t put it up just yet! Lets break out the Mitchell & Ness.

Previously in the career of K.G., after leaving the Wolves after a dozen years, Garnett aligned with Paul Pierce and Ray Allen in Boston for a big-three and Celtic championship that put him in that most storied franchises and the NBA’s legendary lore as one of the greatest of all time. A true Celtic to the champagne, it still wasn’t quite the same however with that perfect pair as his time in the twins.

Then he and P-Double, Paul Pierce where scooped up by the Russian and rap millions of the Brooklyn Nets. Only for Pierce to find a new home this year with a spell with the Wizards of Washington. Now although he’s had a decent veteran tenure with the Nets, it looks like K.G. is officially on his way out too before todays trade deadline, according to league sources.

Several reports indicate that in a dream like storybook ending to his career the Minnesota Timberwolves have lured Garnett back home for his final years of basketball pasture. What a send off this will be for one of this generations greatest? Although Kevin didn’t want to displace his family in New York and the Los Angeles Clippers were also an interested party, it’s great now the night will end with a K.G., M.N. hook up.

Although not to be the superstar frontrunner, this veteran leader could help the exciting young blood of Canadian’s Andrew Wiggins and Anthony Bennett, Spaniard Ricky Rubio and dunking Zach Lavine (not to mention a roster a roll call deeper than you think), really be something. With the rumour upgrading from a quotable “strong belief” that K.G. will waive his no trade contract restriction as we write, Da Kid is now said to be alright with the switch for talented youngster Thaddeus Young.

In other news, Phoenix Suns point scorcher Goran Dragic also finds a new home in Miami’s South Beach, whilst Milwaukee’s Brandon Knight takes his Sun spot. And if that wasn’t enough for you, the Thunder have traded Reggie Jackson to the Pistons (sorry Lakers Nation…again) amongst more breaking news like Isiaah Thomas in Beantown Boston and Michael Carter Williams new million Bucks deal. But in a week that started with Dallas acquiring New York’s Amar’e Stoudemire, nothing is as big as this trade ticket.

By the trade deadlines buzzer, final horn the Minnesota Timberwolves will be doing more than just talking about Kevin.