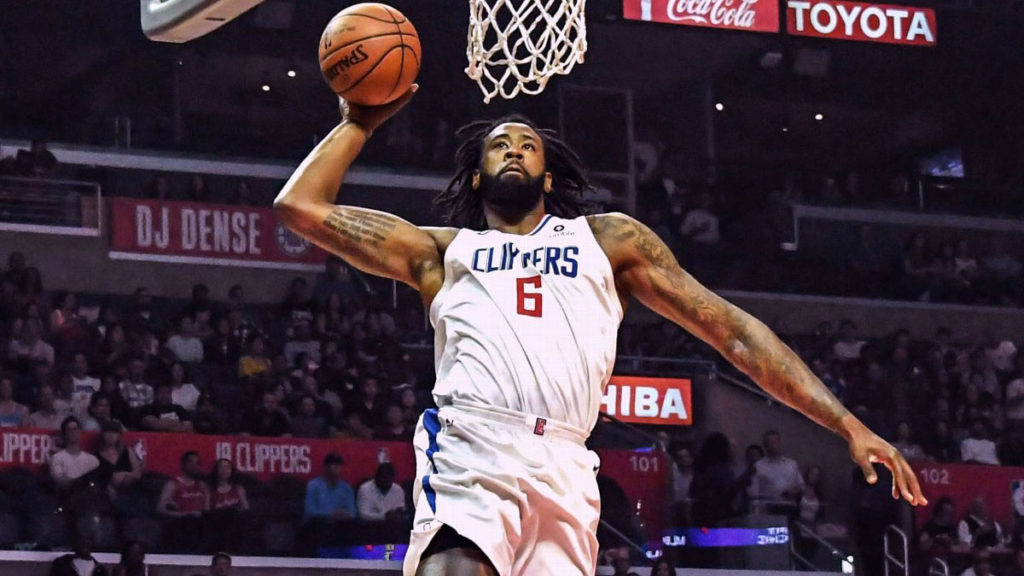 When MVP candidate and leading Point Guard Chris Paul of the Los Angeles Clippers descends down court he has a lot of options at his disposal if he doesn’t feel like scoring himself. To his left you might find leading scorer and ‘Sixth Man Of The Year’ runner Jamal Crawford, to his right defensive maestro and underrated offensive talent Caron Butler. Then there’s the rest of the other former Laker STAPLES on the ‘other’ side of L.A. (Chris Paul was a Laker for albeit two minutes and about two tweets), guys like Lamar Odom, Matt Barnes and Ronny Turiaf. Figure in fellows like Eric Bledose, Willie Green and the rest of the ‘Tribe Called Bench’ on a quest for the ring, or valuable veterans like Grant Hill and Chauncey Billups coming back into play. Then of course there’s arguably the most exciting and entertaining offensive dunker and rim rocker around, the monster known as Blake Griffin.

Still sometimes Paul may toss the ball and the alley in the air and find the oop of a guy that looks like he’s dunking over entire teams and courts, not just Brandon Knight. A big man with Nike like air taking the wind out of Pistons, opponents sails and sneakers as he soars and scores a simple two made beautiful in the form of an ugly dunk. This signet has become a swan. The former passed up draft pick (35th?!) and bust labeled guy is taking it all out on the critics like his former joked on team is taking it out on Los Angeles and the league. Hyland is taking the high road, no more D-League dunks, no Bakersfield Jam. Just check out the famous three tiers of Hotel Figueroa in downtown Los Angeles across from the STAPLES Centre, which is now just as much the Clippers home as it is the Lakers. Even the spirit of Chick Hearn can see it from his street. They aren’t Lakers players up there. It’s Chris Paul flanked by Blake Griffin and the other guy cleared for take off in Lob City…DeAndre Jordan.

Must Read:
Air Atlanta...Vince Carter Will Soar One Last Time As A Hawk

All together now, even Kobe can see from his Nikes that DeAndre 3000 is no outcast. He belongs here like his Clippers team in the Laker building that now needs to add a Clippers Pacific Division banner to the Shaquille O’Neal’s retired jersey and the rest of the purple and gold rafters. Dropping bombs over basketball in this battle of Los Angeles the love that below is now booming like a Speakerbox in this shared collection. This big boy is more than big dunks. A 20 and 10 prototype who raises the spirits more than ‘Hey Ya’! Hey young world, shake those Polaroid pictures and instagram those iPhone ones. If basketball is beauty then I think I’m in love again.

With a hustlers blood and shutterbug feet in the blood and bruised paint, each royal flush from DeAndre breaks his opponents. Soaring like Jordan, vibrating the rim and slamming like Shaq, Phil Jackson would be proud if he was back in L.A. Sorry Mr. Jackson the Clippers are for real. The won’t apologize a thousand times even if they didn’t mean to make anyone cry. Just look at the backboard, somethings got to give with the way this guy moves the rim, flip rocking the rock with boom from the tomb. In this war of L.A. with shine blockas on the former shade cool Laker side, Andre’s no bust, waking up a former broken Clipperland like a rooster. It’s night, night for the catcalls and the Clipperholics former sorrows. These beats by Dre sound good beyond the references.

There’s more to this art of storytelling Laker Hollywood divorce however like there’s more to this rebounding and defensive specialists game then top ten dunks and punks ‘stank you’ very much. Be cool, here’s Part Two. A day in the life of DeAndre Jordan is complete with hustle and flow and the hard work that puts his blue collar name in the households of his famous roll call of Hollywood teammates as he rolls with his four brothers in a town that has too many stars and basketball teams. Through all the music, movies and Laker legacy however DeAndre Jordan may be the most entertaining. Y’all scared to what this guy can do, as he rises like elevators. Me and you, your mama and your daddy too. They could all get it when the ball is raised to the rim in De’s hands as flashbulbs and corn pops court side.

Must Read:
Giannis Antetokounmpo Is The Biggest Buck Since Kareem Abdul-Jabbar

We all thought it’d be Dwight Howard or at least Blake Griffin provoking this reaction. It almost makes no sense at all but the whole world is watching another Jordan now when it comes to the peaches. It ‘Aint No Thang’ for Dre Jordan though and his liberation. So fresh and so clean, Shawn Kemp aggression, with a better attitude, Kenyon Martin rawness with basketball purity it’s almost poetic. How the roses are all for De’ here with little for the rest of his star-studded, much loved and talented Clipper side. Still in this players ball it’s DeAndre Jordan that has ‘git up and got something’ and ignited the gasoline of the dreams of the other side of Californian round-ball. Last year this excited young kid, in his sweats and warm ups, warmly hugged Blake Griffin on the stars cover shoot for ‘Dime’ magazine. Now with his star brothers back, the posters and the billboards belong to him and his team. Next come the payoffs and the playoffs. DeAndre will be leading the way. Number one with a dunk.