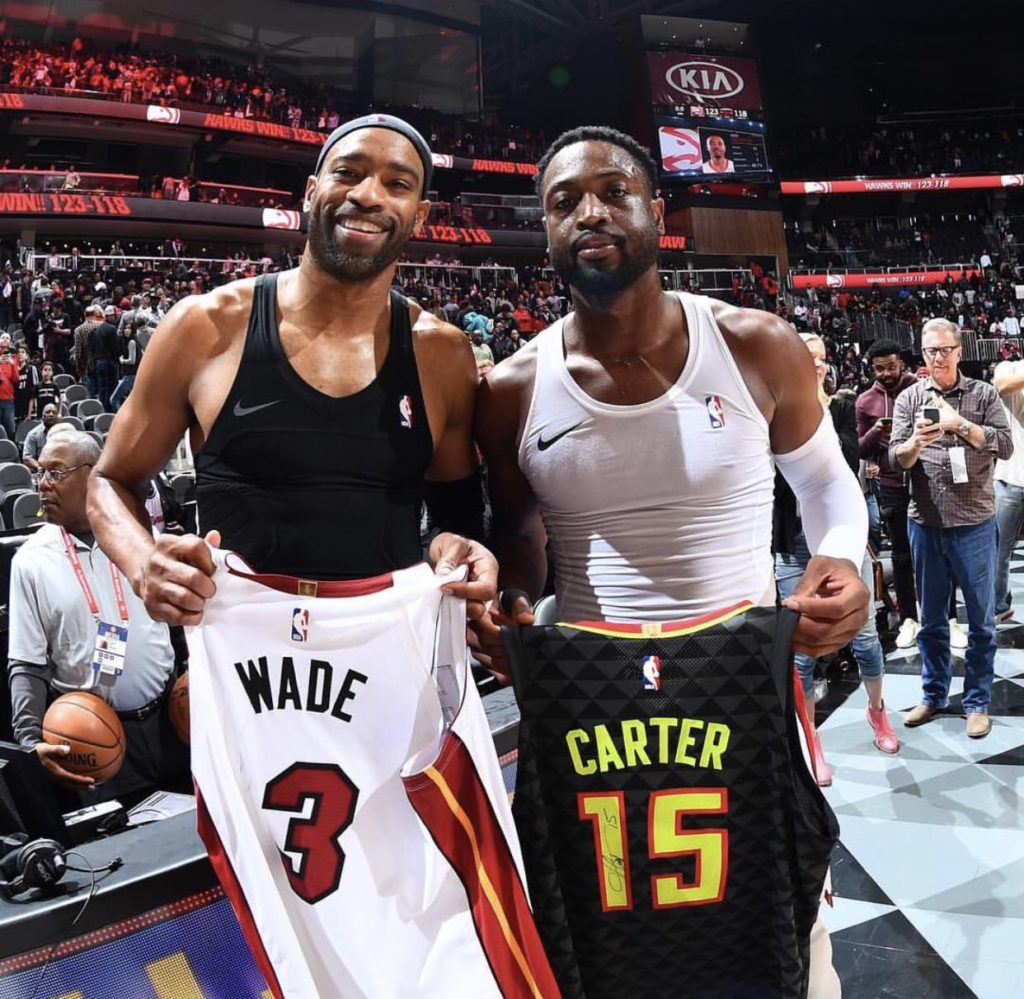 Game Recognizes Game. Swapping NBA Jerseys Is In This Season

Almost a decade of eight years ago, Kobe’s Los Angeles Lakers took on K.G. and the big three’s Boston Celtics for a full seven games of the 2010 NBA Finals in the third historic chapter of these storied franchises clashing like Basketball titans. Decades after Wilt and West versus Bill Russell and the rest and then the 80’s golden Magic and Bird era. Stay tuned for the King v Kyrie part IV sequel to the trilogy coming to an arena near you…soon. This writer living in a small seaside town on the other side of the ocean however had to watch this all unfold on tape delay, thanks to the time difference and a need to hold onto my minimum wage job that didn’t permit me staying up all hours in the AM to watch live Basketball. Especially since that was the time I was usually clocking off from my night shift pushing plates and drunks out the door past closing. And if you thought that was bad, go back 20 years to the Jordan age were around 10 years old the only way I could come close to simulating a real basketball game was by playing NBA Live ’96 on my dad’s PC. And did you see the graphics back then?

Thankfully one of my fellow waiters and an all round legend to boot (what’s up Dan?!) felt my pain and passion for sport. Although he was more West Ham than West Coast going H.A.M. After plenty pleading he recorded all the games for me and not just that. Legend also watched them all with me with no spoiler alerts in the beginnings of the social media Twitter trending news cycle that you can’t even log onto now without seeing a ‘Game Of Thrones’ or King James thread that ruins everything you’ve been living in a hole and waiting for. To make it interesting as well my boy decided to root for the Celtics to boot. Because what’s a rivalry without making the most of it? I’ve said this once and I’ll say it again and always (sorry other Dan). I may bleed purple and gold but I still love our enemy as much as I love the beautiful Boston as a city (see you in a couple of weeks Beantown for I don’t know how many times it’s been now). And as it got to the do or die, banner or bust, W or W.T.F. final fourth quarter wire of the ultimate, deciding Game 7, what would you know the recording stopped early. As we both stared at the finished screen like the product of our angered disbelief (you know when a man’s mad when he just shakes his head and says, “unbelievable”!) glares was going to be the DVR saying, “just kidding fellas. I’m just messing with you. Here’s the rest of the game. Enjoy!” That’s what happens when you call all those timeouts coach. All that for that. We missed the end of the game. And whether Kobe would avenge walking out of the garden with his head down amongst confetti falling like balloons on the Forum. And even whether that Metta World Peace prayer would come with an amen. So to his computer we went to log onto NBA.com and with some real-time paused disappointment find out what the final score was and who won. Oh and this computer may not have been connected to a dial-up broadband but it wasn’t calling in any favours with the fibre optics either. So when it finally loaded up and I saw that my Lakers had won for the first time since big Shaq the euphoria was as real as the egg-timer tension as the site loaded slowly, scrolling down at a picture of purple and gold hands hoisting the legend of Larry before Bird town. That connection may actually make up for my favourite basketball memory since seeing the Lakers live for real in Hollywood for the first time in 2006 when they lost Shaq and got Smush…and Kwame Brown

Must Read:
Wade In The Rafters. The Heat Rises To 3

Even my friend embraced me. And short of kissing him how could I repay him for this kindness in bringing me my first NBA seven game final win for the team that I would die for…or at least go to the other side of the world for (see you in a few LeBron)? Well I gave him the jersey right off my back…or should I say trapped in the closet. My number 34…Paul Pierce jersey. Yeah…I know! I told you I loved the enemy. Sorry Dan (you know which one). My friend deserved it. Besides what self respecting Lakers fan should own a Celtics jersey in this day and age? Even if Paul Pierce is from L.A. You saw what he did with that wheelchair.

My friend who grew up kicking the ball and not palming it like this white boy that can’t crossover as much as his attempt to add jerseys to his wardrobe would like. In soccer (we call it football…but O.K.) players swap jerseys all the time. It’s not almost a post-game tradition…it is one. Even though my friend never did give me a West Ham one in return (what’s up with that Dan?). But this season it seems like the NBA is picking up on this trend. Like we all wish we could with even more great Nike’s than Jordan’s. Or at least one Jumpman in particular.

Gone are the days of trading kicks. Maybe because so many players signature lines have so many rarities they don’t want to even think about unlacing them…let alone unloading them. A game after hitting a career high 31 (already…but we think he can top it too, even this campaign), Dallas Maverick Rookie of the Year shoe-in Luka Doncic asked Laker king, LeBron James for his jersey pregame. Which ‘Bron provided with inspired autograph signature, stating that the man he was giving the hem of his threads to was the next in line. But it’s another Miami Heat legend heading to the sun one last time who is currently making it a nightly Instagram highlight reel.

The Flash of the ultimate Heat hero Dwyane Wade is having one last dance before his career hits the pan. And even though the greatest Miami franchise player of all-time (sorry Zo…cue that anger to acceptance gif) is not getting official gifts from each team he plays, he’s determined to get a souvenir from each team shop and make the most of his rocking chair tour retirement circuit. He’s already swapped jerseys with the likes of Portland Trailblazers swingman C.J. McCollum, who had no trouble giving his up for the camera as he showed off how much he’d been hitting the weight room this Summer. He ain’t no size small anymore. And after doing the honours with the Kings, Magic and more. We can imagine Dwyane will end up doing this on every stop of his 82 game goodbye. Anything to get a Lakers LeBron from his former champion collaborator and last season Cavalier teammate in Cleveland hey King?!

But the other night was something special. South Beach saw the talents of two soaring and scoring father time legends. Who even though both circled 40, also still in tandem, albeit on opposing teams still played and looked above the rim like they were still in their twenties. And after going at it for four straight quarters Dwyane switched his iconic number 3 white hot Heat jersey for a new classic in the neon number 15 of Atlanta Hawk and our generation legend Vince Carter for a real highlight in the limelight. And after a 123-118 Games win over the Heat (with 12 from V.C. But 19 from D), as they posed for a soon to be I.G. favourite for a platform which wasn’t even around when these two O.G.’s first took off the floor for their R.O.Y. NBA careers, it was a moment to savour. Two generational greats who can still play to this day. Side-by-side after going toe-to-toe for what looks like the last time. The love and respect was as real as these players amongst the all-time best get.

It’s time to get a quick dash of the flash before he runs out and Wade’s world stops turning when the ball stops bouncing. Besides everyone’s going to want a piece of those new Miami Vice nights ‘City Edition’ colorways just released like last year’s white album edition before it all fades to neon black.

Dwyane who changed the game as one of the top five, dead or alive Shooting Guards has really started something like Michael.

Flashpoint for your flashbulb memories.