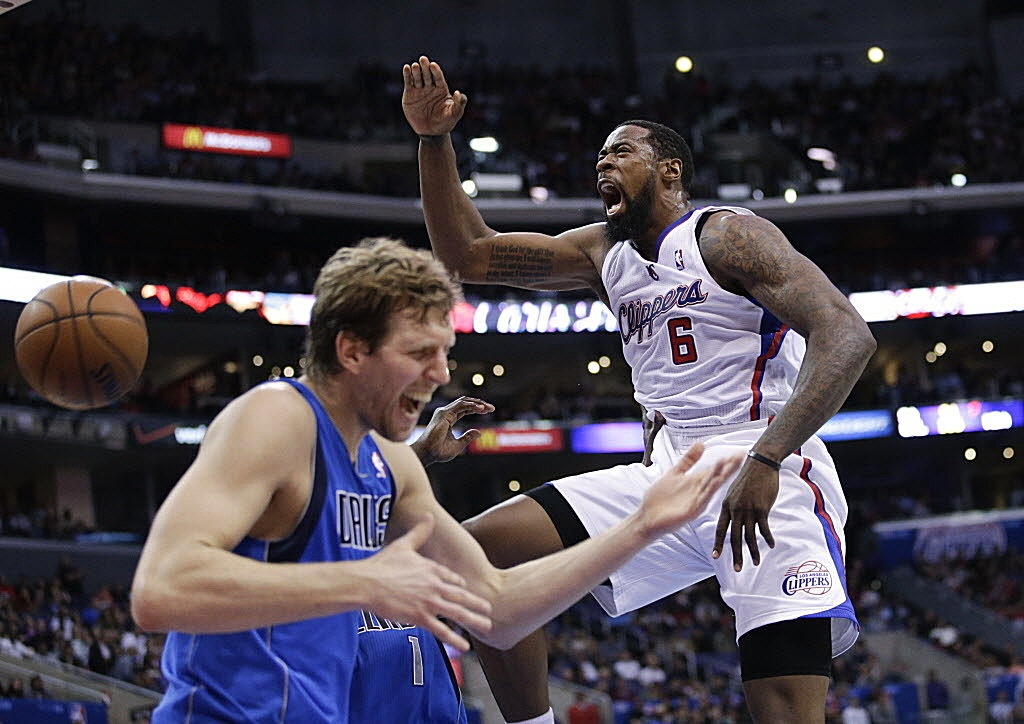 Jordan Changes The Rules, Makes A Maverick Move By Re-Signing With Clippers

The above picture says it all. It doesn’t even need a caption!

DeAndre Jordan’s escape from L.A. was greatly exaggerated. Maybe Mark Cuban and the Dallas Mavericks should have watched Tom Cruise, sport agent film ‘Jerry Maguire’ before showing the money. Because that “my word is stronger than oak” speech doesn’t mean squat in todays big business of backdoor, blockbuster basketball deals…especially in Hollywood!

The Mavericks will need some firewood now to stay hot and believe me if they’d already, regrettably started printing Jordan, Dallas Mavericks jerseys like the Los Angeles Lakers and Maroon 5’s Adam Levine did with new San Antonio Spur LaMarcus Aldridge they’d be wanting to set fire like Cleveland 23’s back in 2010 when talents got took to scorching South Beaches.

Unlike the King, we’re sure the next meeting between DeAndre and Dallas will not be a reconciliation of redemption, but a mainstream matchup, built up and billed over the rawness of revenge.

After last seasons playoff loss to the Houston Rockets, DeAndre 3000 looked like he was about to become an outcast to another Texan team. Rumours of beef with Chris Paul started to sizzle like sirloin for what was at stake in free agency. Despite CP3 posting an up in arms Instagram picture of his big buddy, complete with shot taking Edgar Allen Poe quotes at the media, social or otherwise and gossipers from the barbershops to the broadsheets. Becoming one of the most sought after free agents in the open market of big-men featuring Aldridge, Marc Gasol, Kevin Love and Greg Monroe, Jordan met with everyone, short of teams in the WNBA. It even looked like he was going to cross lockers to become a Lakers STAPLE, until their imperfect presentation left him more “underwhelmed” than Portland’s L.A. ex. After all the dotted lines of offer, DeAndre like many others gave his verbal to the Dallas Mavericks.

But like usual reports and rumours, there was no signature for paper to check.

A change of 11th hour heart later and their was a John Hancock, but on a Clipper contract. After all that it turned out DeAndre was still a Clipperholic and Dallas Mavs owner Mark will only be firing up more comments not celebratory Cuban’s. He was so close, almost cutting the cigar, but Jordan’s quick draw to Texas is now smoke. Blocked out and shot down like J.R., after even J.J. started firing shots. Now a team that has tried but not succeeded to surround ageing veteran Dirk Nowitzki with more high octane talent is left with a roster thinner than Shawn Bradley (we wonder what he’s doing next year), now frontline force DeAndre joins the departed backcourt of Monta Ellis and Rajon Rondo.

Free agency is crazy and Jordan now somewhat joins the majority of players who chose loyalty over royalty, sticking with their current squads. Still now all those teams holding players old or new in non-verbal may want to pick up the phone (if their stars will answer it). Time to make it official. Cleveland and Chicago are surely just glad today of all days their glue guys put pen to paper.

DeAndre may have just changed the rules and revolution of how this already LeBron James changed, free agent game is player played. Come to think about it, has the King made a definitive decision yet?

After the J.J. Reddick F grade Clipper offseason was looking uglier than their horrendous new identity of logos and jerseys, the team has centred themselves with their defensive and dunking anchor. Just check their Twitter, even their logo looks better with DeAndre’s 6 carried in it. Now Doc Rivers men can run anyone horse (word to ‘Hollywood’s’ Jamie Foxx’s hilarious impression). Even contending with the last two league champions out West; the old dogs with new tricks San Antonio Spurs and their Californian king neighbours in Golden State who they must warrior battle with. Now Lob City has it’s big-three back with a nucleus of sharp-shooting Reddick and baby bruiser Glen Davis on deck. To go along with a veteran to young gun mix of Hedo, Dahantay Jones and Doc’s son Austin Rivers. The loss of off the leash, defensive dog Matt Barnes or possibly the one of “other” sixth man Jamal Crawford doesn’t seem that bad in rebooted retrospect now. Especially after L.A. has clipped another ex-Laker in Wesley Johnson and brought top veteran legend and Celtic champion Paul Pierce back home to Los Angeles. And we haven’t even mentioned the wild card of Lance Stephenson yet. The Los Angeles Clippers could even have a big, Fantastic Four going fourth.

Must Read:
With A Maverick Move, Dallas Now Have The Best Euro Big-Three Ever

Superheroes in the land of superstars. Kobe may still be around, but it’s not just the city of angels that belongs to the Clippers again. Now the whole National Basketball Association of America and the world of champions does too.

And like anything in this game it’s all changed because of Jordan.