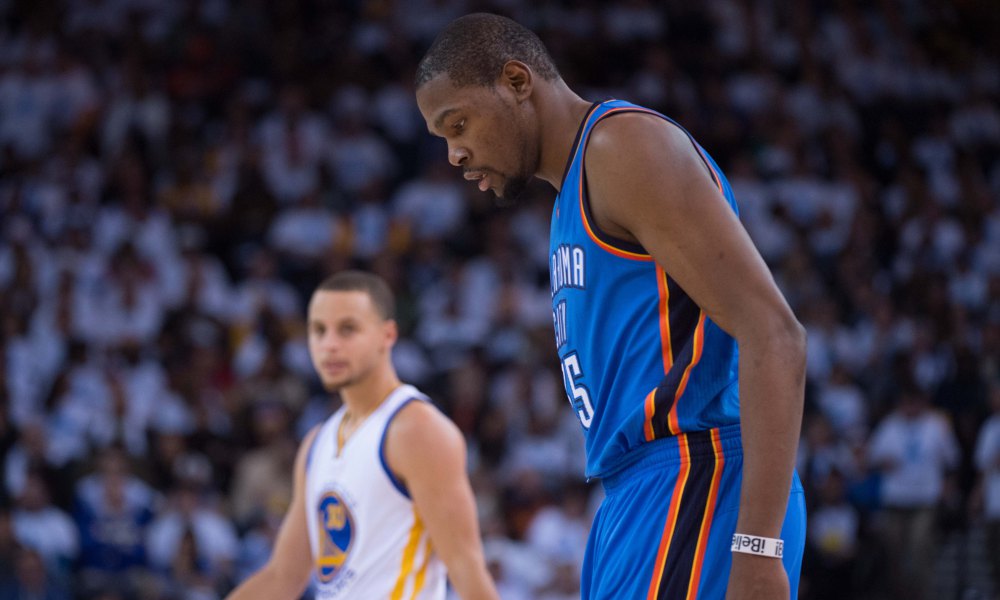 “With that in mind I have decided…”

Believe/like it or not the Thunder star that almost struck down Golden State this playoffs gone will now reign in Southern California (if he almost beat you…let him join you). Giving Cavalier champion LeBron James nightmares and more grip on the trophy he now sleeps with on his side of the land now the Golden State Warriors have two kings and even more splash brother.

Kevin Durant, Steph Curry, Klay Thompson, Draymond Green, Andre Igudola? You may aswell add Larry O’Brien to that five. Hows that for a line-up? ‘Death’ by free agency. Now how was the West won?! By the NBA logo of course. G.S.W’s G.M., Jerry West. Durant, leaving his Oklahoma home and forgoing his D.C. birthright, this is a downpour of despair for the Thunder worse than the weathering of the fall of Harden…and of course Ibaka. From three to four for the Warriors and just zero now for OKC. Now what will Russ do? Come along too? Because it looks like it’s going to be golden in the Warrior state of Oakland again unless this is finally the big market move that takes Golden State across the Golden Gate bridge to San Francisco.

Kevin Durant has been known to help move franchises before.

But now as he finally moves to one with an announcement via an article for The Players Tribune it’s time to Dub this what it is…dynasty!

Or maybe even destiny!

They told us we’d know in around 24 hours. Now on this fourth of July how’s that for some fireworks?

Meanwhile the last 48 hours in this open market has given us a weekend crazier than teaming up Eddie Murphy and Nick Nolte. Like opening a jigsaw on your coffee table there are so many pieces to sort through.

Lets put it all together…

Names like Dirk and Dwyane are still on the table like Gasol or restricted guys like Harrison Barnes of the Golden State Warriors who could have any offer sheet matched. But still big names are being printed on the backs of new jerseys stitched from Boston to Atlanta. Former Hawk All-Star veteran Al Horford will join the storied on the redemptive rise again Boston Celtics…but alas not with rising star Evan Turner who joins a new big-three power out in Portland. Replacing Horford out in the A will be Dwight Howard who is welcome to Jermaine Dupri and Ludacris’ city after some problems with Houston.

Another man that used to make his green with the Celtics, Rajon Rondo now joins the new Chicago Bulls charge led by their Butler, filling the hole left by Rose. There’s an even bigger spot open now however as former Defensive Player Of The Year Joakim Noah takes his arc of talent to New York also, joining former and new teammate Derrick. It looks like the Knicks are getting great Chicago players two-by-two, looking to add the flash of Dwyane Wade along with Courtney Lee to their new squad led by Carmelo and Porzings that would surely spell championship if that word ever could contain an N.Y.C.

After drafting big with lottery pick Brandon Ingram, the Lakers are looking to surround the number 2 kid with even more big bodies with their second moves of the second season. Their first day was a success even if Durant ruled them out like he did their neighboring Clippers. Key and Peele substitute teachers nationwide will be going crazy over the signing of Cav champion Timofey Mozgov. Whilst they re-upped their Jordan future with four more years for Clarkson.

That was all in the first day. But yesterday they added the muscle milk of Tarik Black back in the show of what’s beginning to look like the youngest and best line-up that could run other teams to death. Or suicide. Still that all had nothing on Lakerland making a big Hollywood move, making a play for the best of British, Luol Deng. The former All-Star can still run and score. But the genius play is signing this fellow former Duke alumni up to mentor another Blue Devil now bleeding purple and living gold in rook Ingram. Looks like the post-Kobe age is set for a youthful revolt behind Brandon, Jordan, Julius Randle, Nance Jr and D’Angelo. And the shows not over yet…even if the Swag just may be like Iggy.

Must Read:
Welcome to The Land of the 2022 NBA All-star Game

There were more show-stopping moves and highlights however in a big basketball weekend were a single ball didn’t even bounce in what seemed like a New York minute. Hornet Jeremy Lin must be buzzing with his second chance at 15 minutes of superstar fame in New York. But this time the Linsanity will be hitting Nets out in Brooklyn. Whereas former B.K. bomber Joe Johnson will now be making music with the Jazz. Whilst the former salt of Utah, Al Jefferson looks to get his career back on pace with Indiana. There’s more than six degrees of separation here. From Chandler Parsons rocking to Memphis and Jeff Green tricking to the Magic. You need a ven diagram to keep up with all these movers and shaking up. Forget a bracket. This July is madder than March. It’s like a New Years with all thats lighting up this July 4th in the post playoffs basketball resurgence on these players independence day.

Still it seems staying put has been the power move in this years open season for contract ink. Like the aformentioned and big players like Bradley Beal in Washington and Andre Drummond in Detroit, motoring on as a Piston. Or Batum to Bazemore. Whiteside to Williams (Deron). Marvin Williams and Charlotte. Jared Dudley and Phoenix. And of course Austin Rivers with his pop Doc in Clipperland, joining the remaining Jamal Crawford. Whilst our Canadian family will be pleased about the DeMar DeRozan, Toronto Raptors news…’he still the north’. But the biggest contract seems to be have slid over the table to previously underrated, ever reliable Grizzlies Point Guard Mike Conley. Which proves 153 times over (over 5 years that is) to other franchises that if you have the foundations your face will keep its home.

This is something the people of Cleveland hope and expect with their King as James looks to hold down his Cavalier throne.