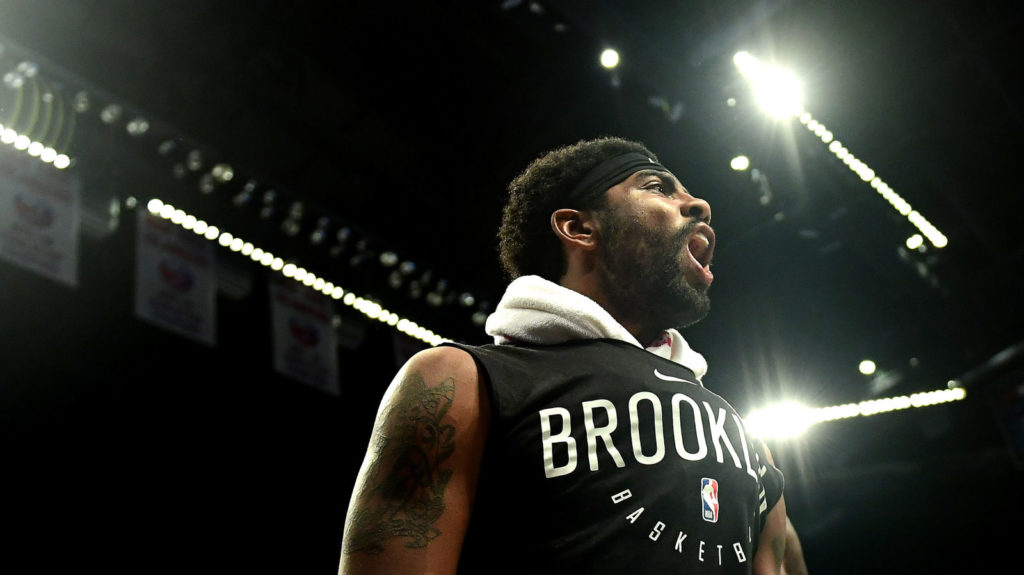 Kyrie Is All About Family

Poppa raised quite the player.

Just days after his opening night 50 piece in the B.K. on the anniversary of his grandfathers death, new Net Kyrie Irving hit the winning shot this time. All in the Everton/Liverpool soccer, or Lakers/Clippers West Coast like same city derby against their crosstown Manhattan borough rivals the New York Knicks, in this fight for N.Y. And this time looking pure joy jubilant after netting this clutch, the Net had the bounce like he wish his off balance rim rocker from his last game did, as he bounded into his fathers arms after stripping off his black B.K. jersey and giving it to the man who made this all possible.

It was fathers day for Kyrie again last night.

We saw it on draft day, when he got signed by the C’s and in that all the feels Nike commercial with Uncle Drew talking about the Boston rafters. But now in this ‘Space Jam 2’ age it looks like there’s more chance of seeing an ‘Uncle Drew’ sequel (lets hope…hold my nuts) than this banner moment up there with all the Bird’s and championship cigar smoke.

In this where amazing happens association it’s one of the most beautiful things you love to see. Especially for a man who has been Harden hard times criticized as ball-hog selfish (they hate Kyrie, but yet they love Kobe? Cue the Nick Young GIF…no not the one where he’s celebrating after shooting a Commodore brick house). How can you even say that when he’s like this? The new headband warrior like his former Cavalier teammate LeBron James bringing that, the chalk toss and everything but the 6 back in Los Angeles, Hollywood with the Lakers, is fro’ growing it all out as he grows up, grows his game and never forgets where he came from in this father time.

Must Read:
The Many Problems Facing the USMNT

Battling back from the legal age of being able to drink a Canadian Dry down, Kyrie lead his Nets, putting the syrup on the Maple Mamba R.J. Barrett’s new, New York Knicks, which looks like the big beginning of the new storied rivalry for the claim to the five boroughs, forget a rewoke storied Celtics/Lakers rivalry between the King and Kyrie. The Knicks fans in the BKLYN house may have booed Kyrie, but as he put 26 down on the new great grey replacing parquet almost as iconic as him, Irving showed love the Brooklyn way irking them even more. All before showing real love like J. Blige to his elder statesmen, watching his son go B.I.G. with courtside seats, Knicks vs Nets, the same price as private jets, as his son soared with his team taking off down the stretch like limousines.

We all know the story now…and its a beautiful one. Kyrie’s father Drederick Irving playing down under had the game to ball in the NBA too like his son. He even tried out for Boston once. But he gave all that up after his wife and Kyrie’s mother tragically passed away when his boy was 9, to raise him and his daughter alone in Australia. And one day help his son achieve his and his own dream of the National Basketball Association certification.

Like Irving junior says, “my dad sacrificed his dream, so I could live mine!”

And just like last year in Madison Square Garden beating the Knicks again, the Irving’s had another mecca moment against the team he almost could have played for this Summer. As they hugged shoulder to shoulder, burying emotions and butt slapping them into attaboy joy.

Must Read:
No Love, Gasol, Aldridge, Butler Or Jordan For Lakers

Looks like they just did it and remade that Nike commercial. The one where the former Celtic talks about wearing number 11 for his father and wanting to be the reason no one else does.

Well maybe he can do that here, because that swoosh campaign was always more about family than the Boston born one.

But now in the brownstone borough of New York it looks like he’s found a new one with this bond, band of brothers and the senior officer he’ll always salute to.

This jerseys for you Dad!