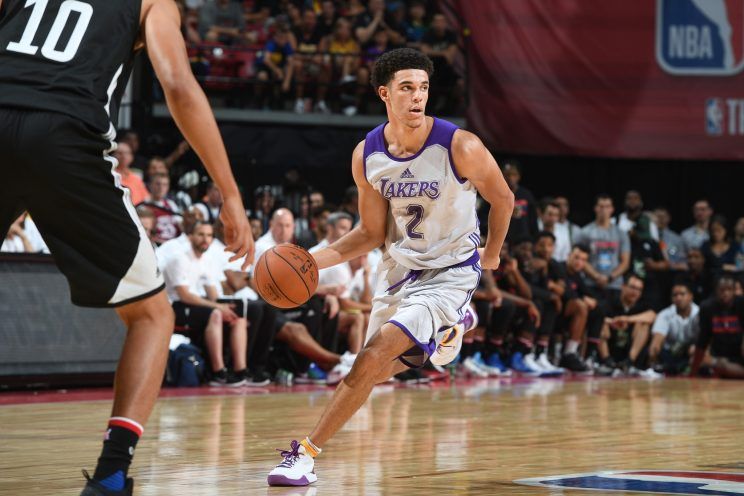 Those who were calling the Los Angeles Lakers new number two (in jersey number, draft pick and pecking order behind sophomore star Brandon Ingram…the Magic piece to build around) Lonzo Ball a bust on the Las Vegas strip might want to check their own taillights.

Because after an underwhelming debut in Sin City where the Twitter trolls could barely be bothered registering his box score stats, Zo rebounded with a triple double in game 2 of the Lakers NBA Summer League campaign in Las Vegas, Nevada. His legacy making line and date of 11/11/11 had B.B.B wrote all over it and showed in the wake of the D’Angelo Russell trade to the B.K that this L.A. number 2 really was actually number one.

Ball sat out the next game with a sore groin, but even nursing one last night the kid like Jason balled out in a 103-102 victory over Philly.

The 76ers may have been without their number one, first choice Markelle Fultz but Ball proved he was a top prize pick too out in the desert. Shining like neon in L.V.’s Thomas and Mack, he had everything down the line like the gaudy versions of the worlds landmarks on the Las Vegas strip. Did you like 11 x 3? Then how about 36 points, 11 assists, 8 rebounds, 5 blocks and 2 steals for your chips money?

I guess all that Twitter tweeting talk for the birds is a bust now.

Because the legend of Zo starts here.

And like assisting B.I. with the alley, Lonzo linked up with the rest of his Lakers connects with the ball in his hands. In their one point beating of the Sixers, sophomore Ivica Zubac also dominated in the middle with 21 points for Zupac’s sure thing. Whilst fellow shining rookie Kyle Kuzma sparkled in this casino city with 12 points and 13 ‘bounds.

Now the Lake Show lead by the Lakes Zo is rolling to the Bellagio as they extend their Vegas residency to the roulette stages of the Summer League playoffs. And it’s all thanks to the fountains of talent available to current L.A. S.L. coach and actual assistant Jud Buechler. The former 90’s Chicago Bulls champion and role playing great shared the ball with the greatest of all-time. But now leading the young future he knows just who is taking the bull and the ball by the horns.

You just know father Lavar with a “I told you so” Cheshire Cat with all the cream grin on his face will say, “it must be the shoes”.

But those stats though.