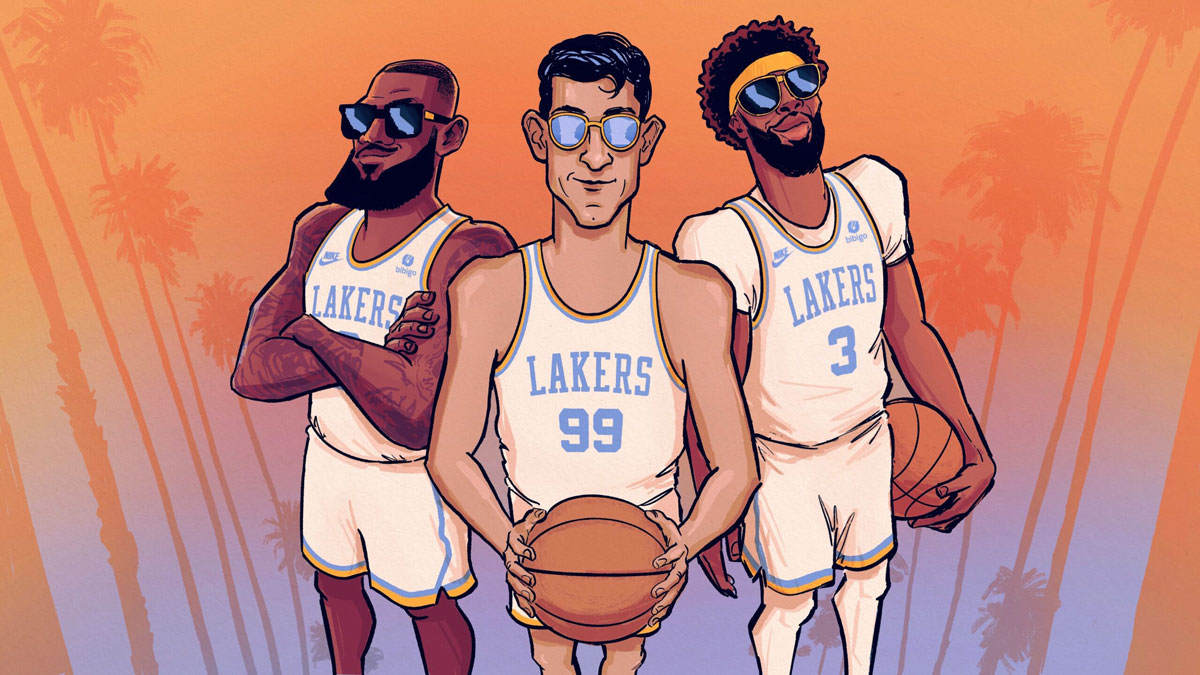 California classic editions for the lakers and warriors

Get ready for more classic editions to hit the hardwood streets, once more NBA teams reveal the latest Nike editions to their jersey closets. But right now, we’ve just got to do it. Giving it up for the best coast like ‘Pac and Dre. The reigning champs and a league legend.

Oakland is definitely in the house like Jordan Poole rocking that ‘We Believe’ throwback at a party, because the belief is still so strong. Especially as the Dubs showed and proved, putting everyone to sleep like a Steph Curry “night, night” and the history books on dynasty notice.

Now, a week after making a statement with a nice, straight-forward navy jersey, the champion Golden State Warriors have released their ‘Classic Edition’ jerseys and they are instant vintage to the very name.

Tougher than basketball leather, these new blue and yellow threads take it back to the days of RUN-TMC. Perhaps the coolest court collaboration and nickname of all-time, outside a Fab Five in the maize of Michigan with former Dub Chris Webber. Named after my Adidas of a legendary rap outfit, TMC ran with the young guns of 90’s favourites Tim Hardaway, Mitch ‘The Rock’ Richmond and Chris Mullin.

Mullin himself providing buzz for these jerseys that are set to sell-out like ‘Raising Hell’ on an eBay search. Hilariously appearing in a promotion in a trademark RUN-DMC bucket hat and bifocals. The only thing missing was Adidas sneakers. This is a Nike promo after all. Chris would have had to cover it up, like Jordan a Reebok logo with the American flag, for the 1992 Olympics in Barcelona.

This is all a dream though, as you just know Curry will heat up classic moments in this terrific throwback with Klay and Dray.

Must Read:
Devin Booker Books A Legendary 70 Against Celtics

Mully may even be mulling over a comeback as he joked, “man, I’ve still got it.”

Way back. Back into time. As the Lakers are taking it back to their first-ever home jersey for their 75th anniversary, one year removed from the league’s one.

Before Los Angeles and the purple and gold was the white and blue of MPLS. It was Prince who made Minneapolis purple, not the King’s franchise. And before AD, Pau Gasol, Shaq, Kareem and even Wilt, the greatest Lakers big-man was the dominating spectacle of the league’s first superstar. The late, great George Mikan.

After honouring the dearly, recently departed Elgin Baylor with his ice-cold, baby blue jerseys, two seasons back. And the purple stars that paid tribute to an amalgamation of eras last year. This campaign’s duds are the best editions since the Kobe designed Mamba snakeskin black threads that will also make a return for the Lake Show’s year number 75.

From the Midwest to the West, in Minny typography, the Lakers are really paying attention to the details like we hope Darvin Ham’s men will for their upcoming quest to get back amongst the best and burst that notion that their last ‘chip was just a Bubble asterisk.

Even the classic Nike logo of the 70’s and 80’s, before the swoosh was just synonymous on its own, makes a swooping return to the lapel. All of this is complete by some amazing artwork from the Pure Hoop of Jack Perkins who kept us entertained through the playoffs. Documenting the game in his time-capsule pieces that belong in a museum.

As for this Lakers jersey, put it in the Louvre. And RUN-TMC, the rafters.

Must Read:
UPEI women rally to win U Sports bronze over Laval

It’s going to be leather tough for the rest of the league to come correct after this.

Not one, but two Cali’ classics.