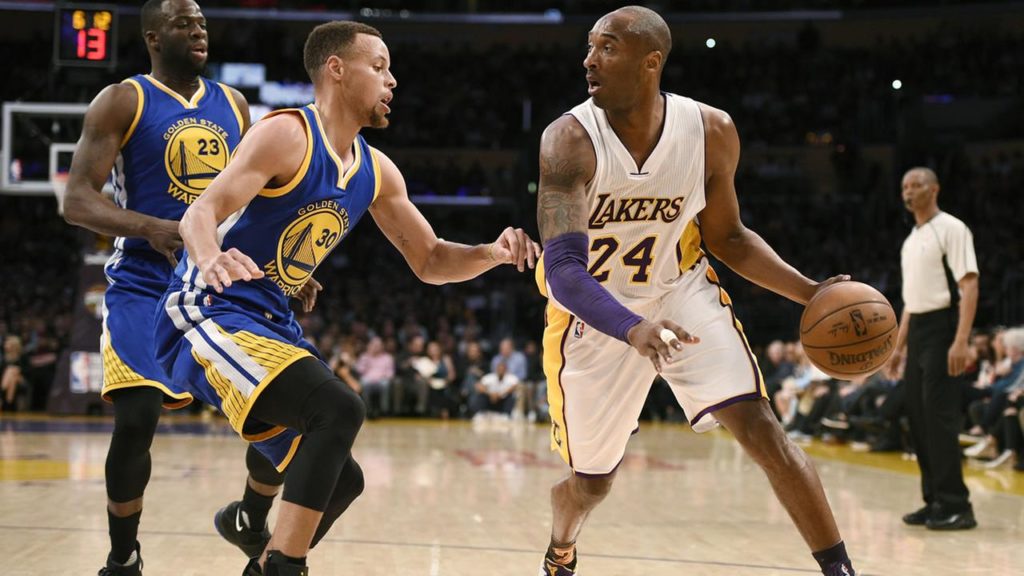 Lakers Young Warriors Come Out To Play Against Golden State

We hear it again and again. “Kobe’s done!” “This is just a retirement tour.” As for the rest of the Lake Show. “They suck!” “They can’t get the job done!” “They aren’t beating anybody!” “Especially the Golden State Warriors! Nobody is beating them! This game is just a formality”!

Looks like everyone is getting tacos tonight…except the Golden State Warriors.

Okay! Let’s not get carried away now. Even if the young guns and the old hand just knocked out the Ali of basketball. On their champ, champagne charge to beat the Chicago Bulls regular season record 72 win season the Golden State Warriors are still the team to beat for more than just one game. But as the Lakers handing them their 6th out of the 82, this California clash had a little more heat on the Pacific coast.

It wasn’t raining in Southern California for Chef Curry (after saying there was “no chance” he could eclipse Kobe’s record 81 against the Raptors, he had 18…but most of his special 20 threes were sent back to the kitchen) and his Warriors only made 4-of-30 shots from downtown and Pico. No wonder Steph looked so sad saying goodbye to his fellow All-Star in Toronto, Canada after saying he’ll see him one more time in L.A.

But even Laker legend Kobe wasn’t the high man as he notched 12 points before wrapping that sore shoulder and huddling up his teammates and telling them to “beat the s###” out of G. State. Still rocking special Kobe Stance Socks, the rest of his team pulled them up like Nick Young’s back-to-back, Macklemore thrift shop, three point swag (he’s really filling it up, filling in for injured Six Man Lou Will). From future big man, big star Julius Randle, to fellow frontcourt force, rookie Larry Nance Jr dunking off the amazing assists (plural) Marcelo Huertas who has finally been given the change to show just how perfect the passes of this selfless player really are.

Still it all came down to two dimes. It was the rising stars that were all ball like the Lake Shows Sunday best was all white. The number 2 rookie and the slept on sophomore D’Angelo Russell and Jordan Clarkson were doing work. Forget the Splash Brothers across the Golden Gate Bridge. Past the Hollywood Sign and the Jack Nicholson celebrities sitting courtside the backcourt “Brodie” brothers made a name for themselves as number one and two (wearing the old Eddie Jones number 6 (a guy who was the man on the Lakers as Kobe was just starting out…coincidence)) in purple and gold.

Russell booked in an athletic 21 points out West and continued running ice through those purple and gold veins that hit highs of 39 points last week. Looks like the waiting game has finally paid off for the confidence hot rook who is breaking through all sorts of walls. But it was Jordan that ruled last night with 25. Clarkson is looking to be in a school of his own even taking these Warriors to a crossover spin class. Working it like his off court fashion as stylistic as Russell Westbrook the man thats game is inspired by Steph Curry worked it like the chef last night as he dished and served it all up in front of his influential idol.

Looks like a new Jordan is about to become one too.