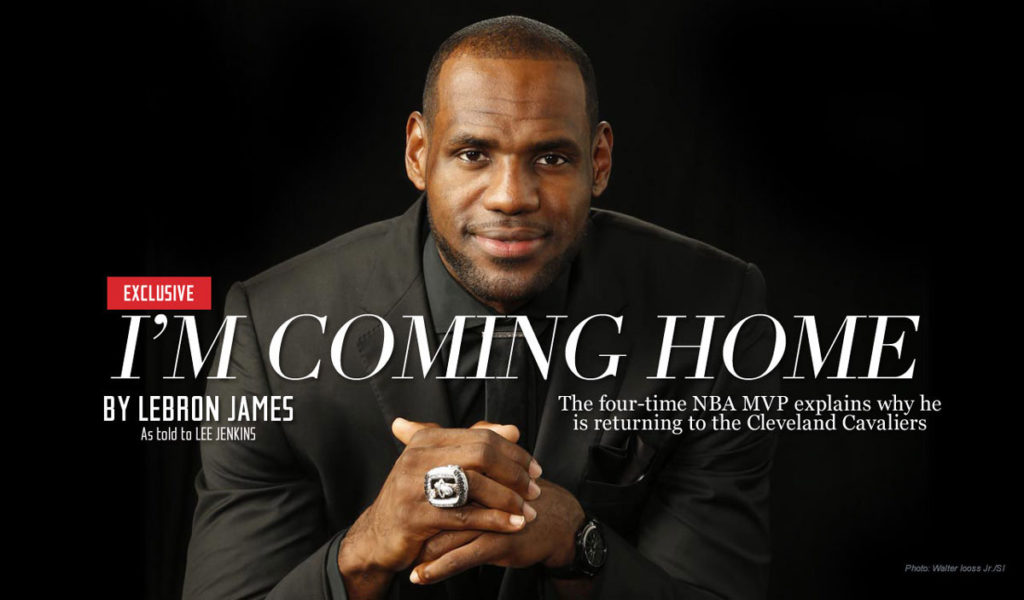 The King is coming home.

LeBron James announced that he is returning to Cleveland in a sincere and honest letter to Sports Illustrated, ending 25 days of major speculation since the Miami Heat were dethroned by the San Antonio Spurs in five games.

As the days of speculation grew so did the clues that James was indeed returning back to organization that selected him with the first-overall pick of the 2003 draft. First came the news that he was moving some his excotic cars back to Cleveland, which followed more speculation when it was announced King and his family were property shopping.

I always believed that I’d return to Cleveland and finish my career there. I just didn’t know when. After the season, free agency wasn’t even a thought. But I have two boys and my wife, Savannah, is pregnant with a girl. I started thinking about what it would be like to raise my family in my hometown. I looked at other teams, but I wasn’t going to leave Miami for anywhere except Cleveland. The more time passed, the more it felt right. This is what makes me happy.

The decision 2.0 shows James’ maturation as player and mostly as a human being who wanted nothing but the best for himself, his family and the city that raised him.

This time around there will be no national television announcement, no parties and no championship guarantees, and despite watching his jersey burn and his former and new boss in Dan Gilbert (Cleveland Cavaliers owner) call him a narcissistic and self-promoting individual, James looked passed all of that and decided he wanted nothing more than to live his childhood dream rised where he was raised and finally try to deliver Cleveland a much needed NBA championship.

For Cleveland and Northeast Ohio this is the perfect redemption story and a time for celebration for a city, a state which was shocked and extremely disappointed back in 2010 when LeBron took “his talents to South Beach.”

As as LeBron himself put it “In Northeast Ohio, nothing is given. Everything is earned. You work for what you have.” and Cleveland has definitely earned the chance to bring back it’s prodigal son.

In this article:Cleveland Cavaliers, LeBron James