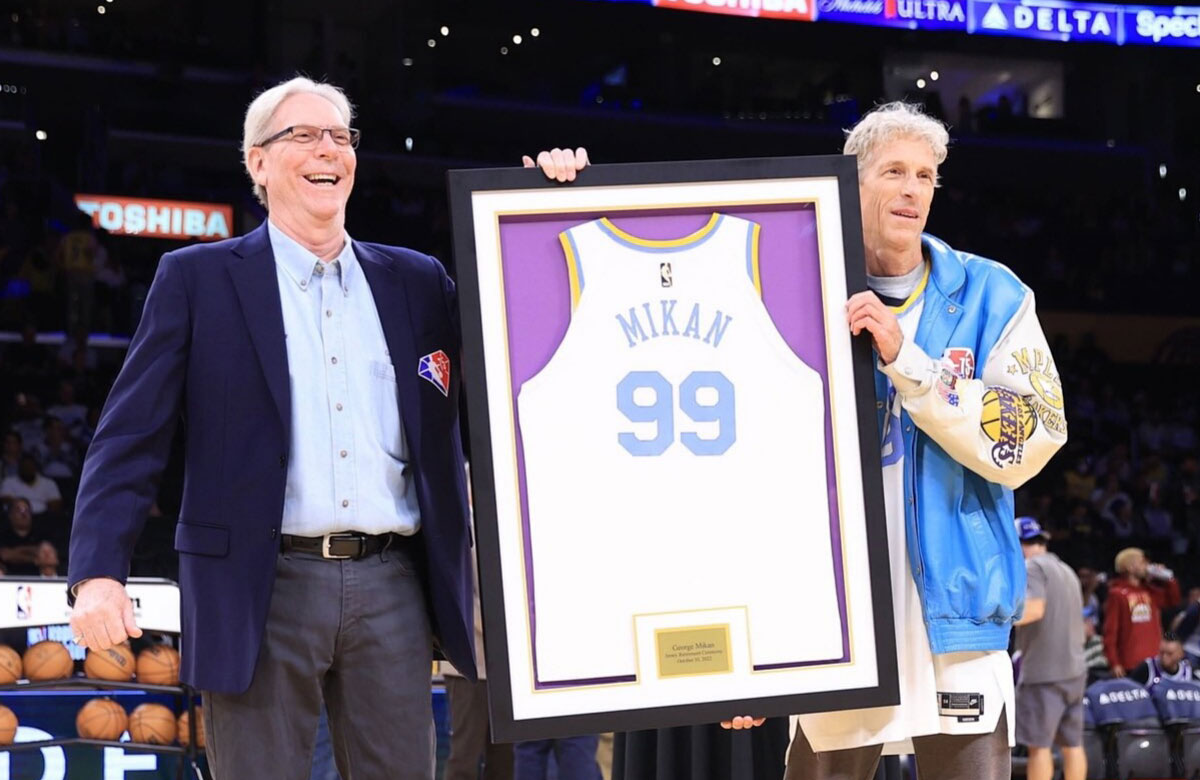 No, we’re not talking about the Lakers snapping a worst of all-time five-game losing streak to start the season. Although, how sweet it was that Darvin Ham got his first W as a head coach.

They won 121-110 against two-time, reigning MVP Nikola Jokić’s Denver Nuggets in DTLA. With everyone getting on the same page. LeBron (26 points and 8 assists). AD (23 points and 15 rebounds). A rejuvenated Russ, relishing his role off the bench (18 points, 8 rebounds and 8 assists). Not to mention the sky-walking Lonnie Walker IV (with 18).

We’re talking about the original Laker George Mikan, from back in the Minneapolis salad days, being raised to the Lakers rafters here in Los Angeles, California.

The Lake Show threw it back to the first NBA superstar, like this year’s classic edition jerseys do in Mikan’s honour. Making their debut in the Lakers old home of Minnesota on Friday against the Timberwolves. Tonight, replacing their usual Sunday whites this week.

The King’s Lakers were born and raised in Minny like Prince, before their purple reign.

The game down on the floor may have been back and forth like a tennis match, but everyone in attendance looked up to see the number 99 finally taking its place with all the best Lakers who have served.

The late, great Elgin Baylor (who recently had his own jersey tribute), Wilt Chamberlain, the logo Jerry West, Gail Goodrich, smooth-as-silk Jamaal Wilkes, Kareem Abdul-Jabbar, Magic Johnson, James Worthy, Shaquille O’Neal and two for Kobe Bryant. The recently renovated retired jerseys resemble the time they were played in with all the trimmings.

Those faces in the crowd included another big-man Lakers legend in Pau Gasol, whose sweet 16 will soon have its spot up there in March.

It all began with Mikan though.

George’s family were in the house to celebrate the late, great, who was a Laker before even purple and gold. That’s why he wasn’t a part of the latest Laker documentary on Hulu. Yet, the legacy of this legend always will be.

Jerry Buss may have taken the Lakers to La La Land in a trade for New York’s Chrysler Building. Even with a move as monumental as that, back in the MPLS days, nothing was bigger than this glorious George.

One of the NBA’s 75th anniversary all-time best, Mikan led the Lakers to a party of five NBA championships. All off career averages of 23.1 points, 13.4 rebounds and 2.8 assists, for a man who led the league in scoring for three consecutive seasons. The Hall of Famer and 1948 National Basketball League MVP went back-to-back as the league leading rebounder and made six All-NBA first teams.

“Because of you, there’s no limits to where we can play”, Shaquille O’Neal once said of this great man named Mikan and inspiration to him and countless others who lived down in the paint and above the rim. The big fella even paid for the funeral of the first one of his kind after George fell on hard times.

The spectacle that was the glasses wearing centre took care of the game he helped hone and look after, but the NBA should have paid more attention to George Mikan. Rushmore and GOAT conversations need to focus on his prescription.

Finally, that wrong has been made right tonight.

Must Read:
Spurs waive Canadian Joshua Primo after allegedly exposing himself to women

By George, he’s finally got it.