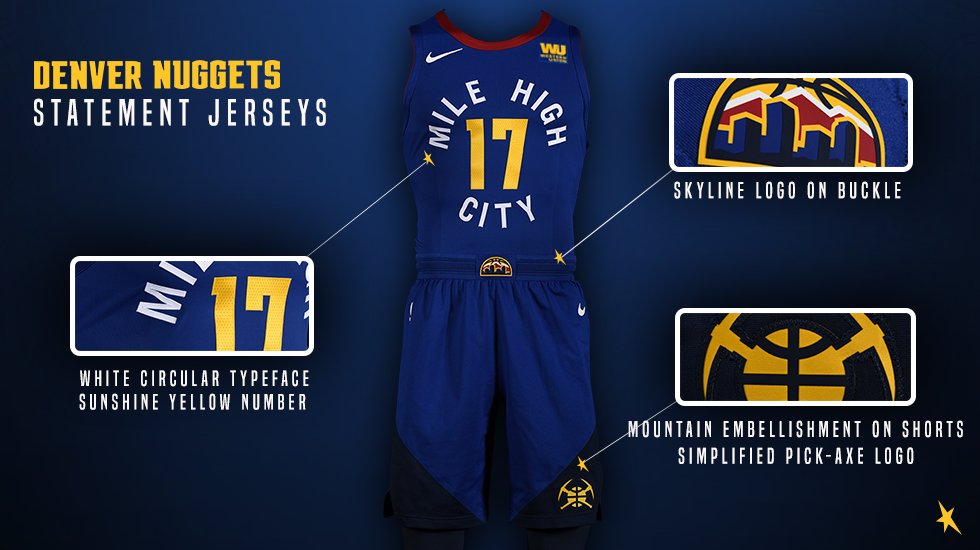 Now if you thought that was a statement from the Denver Nuggets, then wait until you see this.

Last week during Game 3 of the NBA Finals the Colorado franchise could hardly wait to unveil their new jerseys and identity for the next 2018/2019 season. Although it’s not like this years finals weren’t already a foregone conclusion like failing to cram for an exam, as Kevin Durant and Steph Curry’s hot Warriors brought out the brooms against Cleveland.

Maybe the Nuggets just wanted an outside chance at showing free agent LeBron James how good he’d look rocking with the Spalding in Denver.

It’s going to be a real hot Summer. So you could probably do with some threads thinner than the air up there in Denver and the Nuggets are taking it back to the classics for the new school, next generation of Jamal Murray and the Joker, Nikola Jokic.

The baby blue ‘Melo era is well and truly over as a darker blue sky, golden sunshine and maroon earth pick-axe logo takes it back to the color scheme of the 90’s ‘Dice age. A time where the wonder of the eight seed Denver Nuggets surprise swept the number one, Shawn Kemp and Gary Payton Supersonics right out the playoffs and probably eventually Seattle. As the mountaintop of defensive Dikembe Mutombo held the rock above his head in glee like it was a newborn Simba.

The team who were once like Houston, when they played in the red, white and blue of the ABA as the Denver Rockets, also took it (throw)back to the 80’s with the return of their iconic rainbow skyline logo. A Mitchell and Ness favourite for years in the Hardwood Classics Hall of Fame. But up in the air it’s the Mile High City ‘Statement’ jerseys, surrounding the numbers like an Indiana Pacers product that really takes your breath away.

Must Read:
A tale of two magnificent game sevens

And with currency exchange Western Union sponsoring this team in the mountains again, this is one package you’ll want to send to all your friends and family.

Denver have the thin air competitive edge over their opponents and now they have the advantage of releasing their new uniforms ahead of the opposition.

Like stonecutting away until that last hammer blow sees the light of day, these new Nuggets have struck gold. These Denver duds are mint.

Fit for a King though?

Welcome to the Mile-High club!

In this article:Denver Nuggets, NBA, Nike