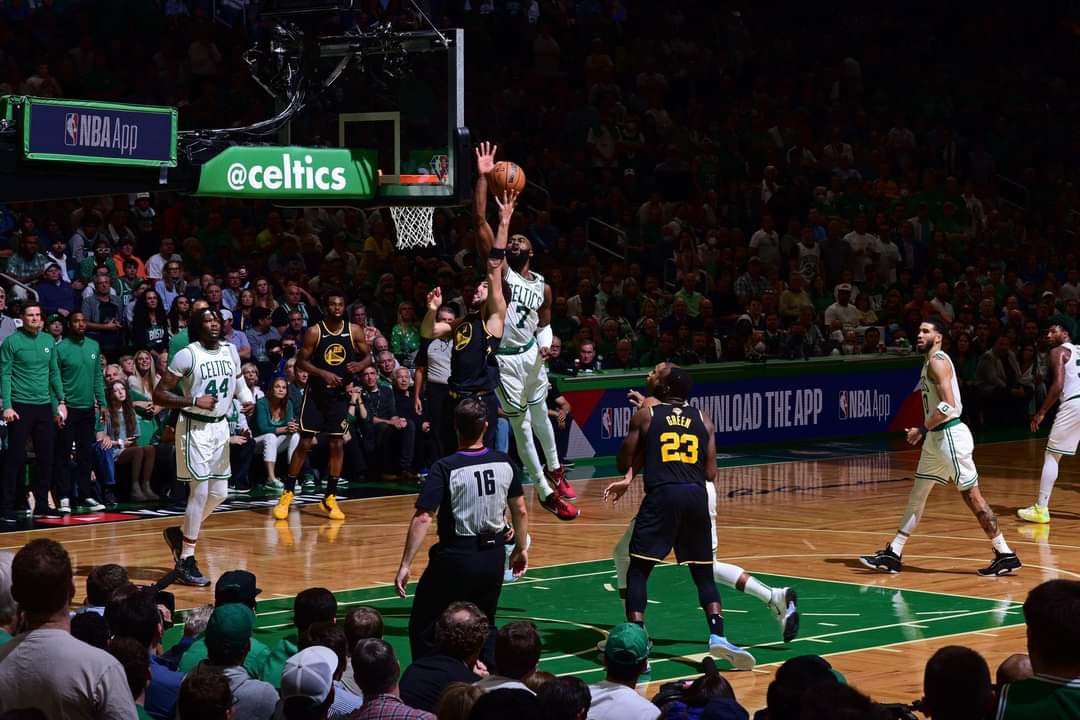 The luck of the Irish shamrock Celtics have that in spades.

And now we have a series.

Klay Thompson tried to paint a late lay-up in the final quarter, but Mike Breen replied, “blocked by Brown” in his signature style. He could have equally uttered his iconic “BANG” that he gave to a Marcus Smart clutch bucket from downtown, just a play earlier.

Because that was ‘Bron in The Finals over Iguodala big.

So much so, the Celtics are blooming. Hoping their Garden grows before a Game 7.

As fans, we just love to see it. We haven’t witnessed a thriller like this since MJ moon walked. Or God had 63 in Boston. Disguised as some guy named Mike.

Hall of Famer Paul Pierce was in attendance, but the Celtics’ new big-three, comprising a dynamic duo of twin-wing superstars and this 75th season’s Defensive Player of the Year, were perfectly balanced as everything should be.

Not to mention Robert Williams III, patrolling the paint like Van Gogh. Having himself a game with 8 points, 10 rebounds, 3 steals and 4 big blocks.

Back in the day, compared to the likes of Kobe and Iverson, guys like Vince Carter and Tracy McGrady weren’t called young stars. They were certified superstars. Now coming of age in the same game as LeBron James and Kevin Durant, Tatum and Brown aren’t just rising stars anymore either.

Now you’re in The Garden, you better get off their lawn!

The Dubs may live more than they die by the three, but Boston matched them splash for splash far from The Bay. Rebounding and them some after Game 2’s loss to take a 2 to 1 series lead with a 116-100 victory.

Their points total as sweet as that birthday.

Brown came alive in the first quarter with 17 points, 5 rebounds and three triples. Exposing Draymond Green a game after the defensive dog tried to pull his pants down. Game 1 MVP Al Horford was also in fine form on the defensive end and with the three-ball.

Even six from downtown by Steph Curry (31 points) and five from Klay (25 points) weren’t enough to keep Boston at bay when it came forth in the fourth.

The Boston Celtics’ Twitter hashtag has officially changed to #AllAbout18 for these NBA Finals. After drawing first blood in Game 1, and now truly coming back to home court advantage, it looks like those who bleed green are ready to lift another banner over the Lakers, who tied them in the Bubble.