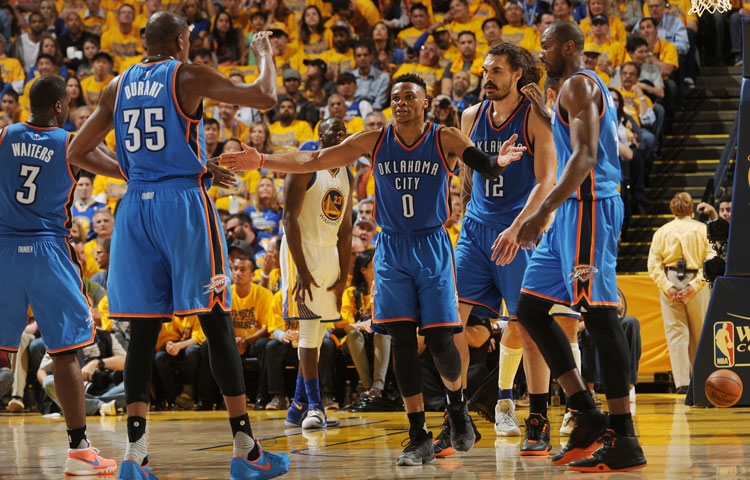 The Oklahoma City Thunder are an enigmatic bunch that leaves everyone, probably including themselves, perplex each time they take the court.

Based on the talent, and offensive firepower they throw on the court, one would expect them to be invincible. But, their offensive nuclear power can also drive them to the ground. They can kill you, or themselves as quickly, and ruthlessly as a shark to blood infested waters. The catch: nobody knows, on a nightly basis, if they are the predator or the prey.

How many teams in NBA history could go at the Roar-acle, home of the 73-9 Warriors, the greatest team of all-time, and pull off an upset despite watching their two best players struggling to shoot the basketball?

Kevin Durant shot a pedestrian 10-30 from the field, and finished 10 points below his scoring average against the Warriors this season.

Russell Westbrook shot 7-21, partly due to his awful first half, but managed to end the game with a respectable 27 points, and 12 assists.

So, while Westbrook and Durant will continue to dominate, and lead the Thunder in scoring, I want to take some time to reflect upon the unsung heroes that have contributed immensely to the Thunder’s success in these playoffs.

Steven Adams, and Enes Kanter are proving to be extremely valuable to this team, and their dominance on the boards is what is keeping the Thunder alive.

In Monday night’s win at Golden State, Adams dominated the Warriors’ frontcourt with a 16 points, 12 rebounds, and two blocks effort that helped catapult the Thunder back into that game.

In the previous round, when everyone – including myself – thought the Spurs would laugh them off the building in four or five games, Kanter, and Adams became the mismatches that propelled the Thunder into the Conference Finals.

Must Read:
UNTOLD gives us the story of 'The Rise and Fall of AND1'

The two unheralded players established their rugged-and-rough style of play in their series against San Antonio, and thus far have kept it going against the Dubs.

Both Kanter, and Adams will never mistake anyone into believing they are key centerpieces to build a franchise around, but they play with as much heart, and fire as their indomitable point guard.

Adams was born, and raised in Rotorua, New Zealand. He is the youngest of 18 kids, and grew up in a rugby-mad country, and a city dominated by street gangs. In other words, toughness and attitude is his DNA.

And, that is what he brings to the table on every play. A relentless warrior willing to do whatever it takes to help his team win the ball game. He is the guy who will trip Danny Green. A guy who will, fearlessly, push Tim Duncan over and stare him down without an ounce of care as to who ‘the Big Fundamental’ is.

Kanter, the Switzerland-native, Turkish basketball player from Kentucky, has yet to live to his 3rd overall draft pick status, but provides instant energy, heart, and hustle.

He and his Kiwi teammates have graciously accepted their roles as the ‘dirty job’ men. They patrol the paint forcing guards, and forwards to re-think their shot selections, and intimidate the opposition.

Against the Spurs, Adams averaged 3.5 offensive rebounds per game (21 total), and Kanter 3.3 (20 total), meaning that they gave their team an extra six to seven possessions each game of the hard-fought series.

And, when you think that three of those games were decided by four points or less, and two by fourteen, those extra possessions are where the Thunder won. An extra possession puts pressure on the defense, gives you more scoring chances, and with Kevin Durant, and Russ on the court, you will lose that battle.

Must Read:
It's Been A Hot Summer With The League Of Young Bucks In Vegas

Pat Riley famously said, “no rebounds, no rings,” and thus far the Thunder are outrebounding everybody.

In their first round series against the Mavericks, Adams recorded 38 rebounds in five games, a tad shy of eight boards per game. His partner in crime hauled in 35 in five games, meaning he averaged 7 rebounds per night.

As a team, the Thunder averaged 47.2 rebounds per game against Dallas who could only muster 35 rebounds per night. The biggest reason behind the Thunder whooping of the Mavericks was their dominance on the boards.

In their second round series against the Spurs, the Thunder hauled in 44.3 rebounds per game while the Spurs grabbed 38.8 boards a night. A much closer battle, which resulted in a much closer series, but in the end the result, was the same.

Monday night, the Thunder outrebounded Golden State 52 to 44, and this trend is likely to continue the rest of the series.

There is an old expression in French that goes “never twice without thrice!”