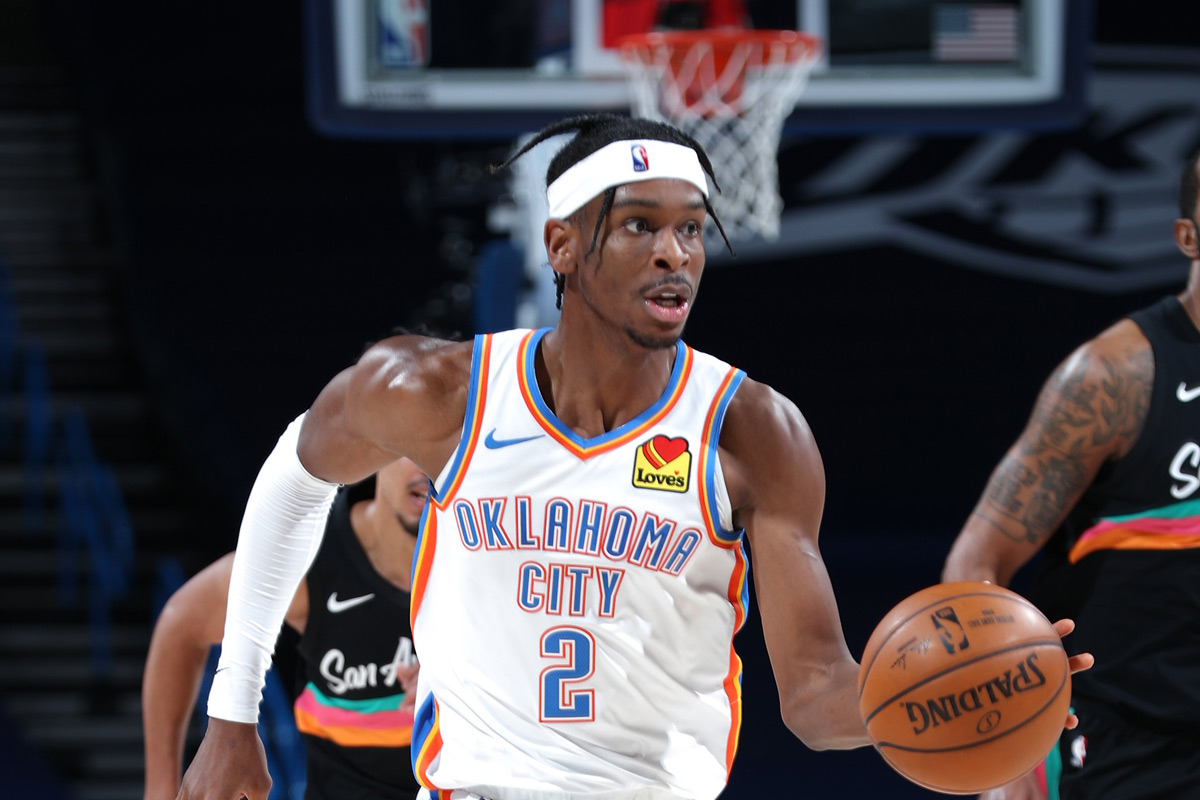 Oklahoma City Thunder guard Shai Gilgeous-Alexander took his career to a new high last night. Hitting the 40-point mark for the first time in his young, promising tenure. Scoring an All-star worthy 42, the snubbed stud led his team en route to a 102-99 win against the San Antonio Spurs in OKC.

Lu Dort’s clutch three-point shot may have iced the game for the Thunder, but it was Shai’s storming 21 in the third quarter alone that caught heat for a team left out in the winter cold like they are in the playoff picture.

Kevin Durant. Well…you know how that turned out.

Even Russell Westbrook is on his second team after Mr. Oklahoma left town. The OKC big-three that could have been hoops most holy of trinities is more than history. It’s mere memory. After going west with Westbrook in the wild and problematic Houston days, James Harden is on his second thunderous reunion. This time with Durant trying to make the biggest three with Kyrie work like so far, so actually, damn good.

But joining the trio of Russell, Kevin and James and Seattle Supersonics great Spencer Haywood, Shai Gilgeous-Alexander-who wants to be the best hand at guard since ‘The Glove’, Gary Payton-became only the fifth player in Sonics/Thunder history under the age of 22 to hit above 40.

The Thunder don’t even have Paul George, Carmelo Anthony, Dennis Schröder, Victor Oladipo or Chris Paul anymore after his rejuvenation season last year. But a bubbling Gilgeous-Alexander like his scorching time in Florida knows all about playing with CP3 like the Point God knows what it’s like playing with the beard of Harden. When it comes to Houston it was for the worse, but the brief back-court marriage for CP and SGA in OKC was for the best of this future superstars development and handle on the game. As good as his one on the rock. Palms down.

Now a day after Shai wasn’t named to the All-star reserves like those deserving newcomers including New York Knick Julius Randle and the Chicago Bulls’ Zach Lavine, he balled out. He may not get his just deserves this season like a criminally left out Phoenix Sun Devin Booker picking up for injured Los Angeles Lakers superstar Anthony Davis, but believe me in a couple of years the man who handed out four assists against the Spurs like roses will be a regular mid-February hallmark like valentines cards.

If he did have a chip on his shoulder, he brushed it off like the dirt.

13-for-20 from the field and 10-for-11 from the free-throw stripe. This young man doesn’t need your charity. In a few months critics on any court will find clarity and themselves guilty of perverting the course of the basketball Gods justice.

This Alexander is going to be great.

The city is Shai’s.