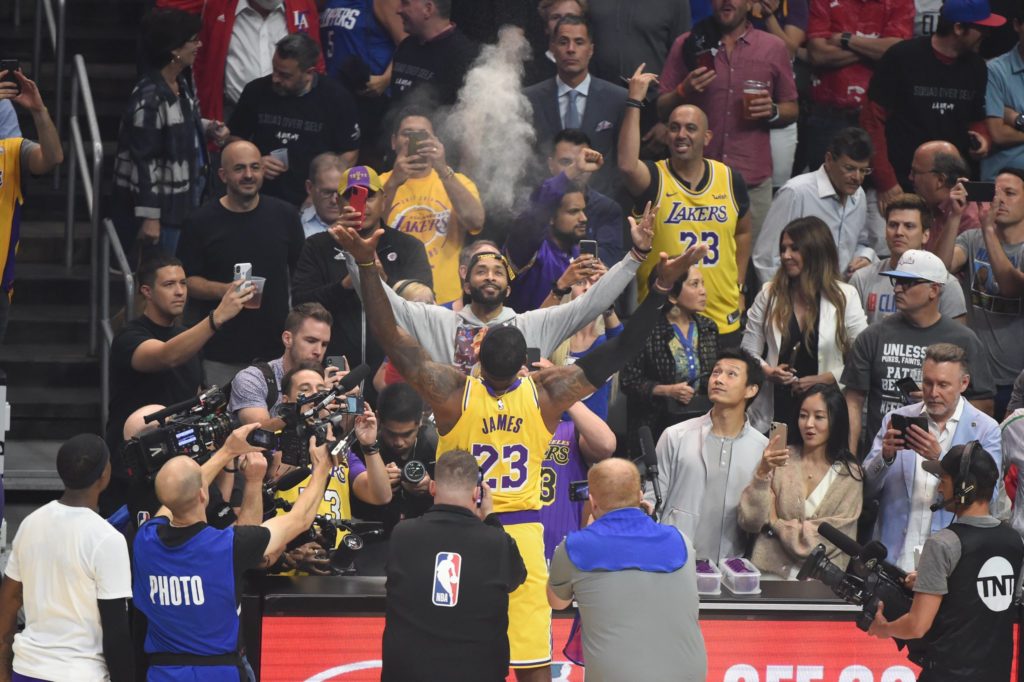 Praise The Lord, The Nba Is Back!

The headband King brought the chalk back, tossed it up, the ball came down and it was on.

But tonight in downtown Los Angeles it was the Clippers house and their fitting banner covering all the Lakers championships and retired jerseys, stating “L.A. Our Way” that said it all.

And the man or few words Kawhi Leonard did the rest. Finishing the sentence with the reigning champs’ Clippers bid for their own championship.

With his former Canadian champion, Toronto Raptor and Spurs scoring teammate Danny Green being the high-man on the other side of Los Angles with 28 (a new debut, opening night record for a Laker, beating all-time scorer Kareem Abdul-Jabbar’s 27), fate looked to be in the purple and golds favour. He hit seven threes, including an off balance one that almost went around the whole rim of the world like Leonard’s infamous, processing winner against Philly last postseason. Whilst big-man for the new generation, still at age 26, Anthony Davis had 25 points and 10 rebounds that could be his average for this season, to go with superstar dynamic duo teammate LeBron James’ line of 18, 9 and 8. And let’s not forget those vintage running back, dunking breaks that hit you like a sledgehammer or a slice of NBA nostalgia from the legendary one and true King.

They combined for just two in the fourth however as the Clippers bench outscored the Lakers pine with a line of 60 to 19 by the final frame. The Lakers began this homestand as the away team against the half century Clippers with a 60 years in Los Angeles (it doesn’t seem like a decade since their Minneapolis actual anniversary of that many years) inspirational video of all the greatest moments of history for the most storied team outside of Boston. Mikan to Magic, to Kobe to now. Assisted by the bass of another video from the Red Hot Chilli Peppers superfan Flea who also showed some of the lows from D’Angelo Russell (really Lake Show?) falling out of bounds with the ball. To the guy he snitched on Nick Young shooting his shot and missing whilst turning around and celebration leaving many as confused as his cult favourite GIF (shots literally fired anyone?).

But in the end this actual superstar Laker team looked like a laughing stock as even BIG3 owner Ice Cube took to Twitter to air his embarrassment like a Good Year, bad day blimp. Not enough Avery Bradley and too much KCP (someone had a point with the end of that Laker captioned Key and Peele infamous Obama handshake video). And the Lakers “consider this a warning” Golden State Warrior dub drubbing tweet which they will never live down now looked as Donnell Rawlings radio booth funny as Kawhi’s laugh on that equally hilarious ‘Terminator: Dark Fate’ commercial tie-in with Arnold Schwarzenegger and Linda Hamilton, as Leonard said “Hasta La Vista” baby and “what it do” to the Lake Show.

The Lakers should have learnt from their opening night a few seasons ago, when the man they let go Patrick Beverly took the ball from their top pick Lonzo like it was never in his family name. And without their D Loading replacing point it looks like new Showtime is not running right now…at least in one side of L.A.

As in this new battle for Los Angeles that was only missing a Crenshaw versus Compton city jersey statement for Nispey, with two new superstar STAPLES and two new one, two punches going toe-to-toe for the K.O., it was Kawhi who went home with the belt. Softening the Lakers defence like milk does cereal. Even when they played him close like butter plays toast. C(k)lawing the Lakers for 30 points, 6 rebounds, 5 assists, 2 steals and a block, to go along with former purp and gold Lou Will’s 21 (put the greatest 6 Man not named Jamal Crawford (you see his post? The Lakers need him like everyone else does) at the back of your cover looking as thrilled as Brandon Ingram to be a Pelican on SLAM now Sports Illustrated) and a clipping 112-102 win for the Clips. Partying like the Atlanta club of the same score name, singing like the R&B group.

Must Read:
The Crippling Of The Guard

It was all peaches and cream for this team…and they were even without Paul George looking like P. Diddy courtside in a dapper velvet and bow-tie suit Dan.

Meanwhile Paul George wasn’t the only month off superstar not making his debut on opening night, the New Orleans Pelicans were without their top pick Zion Williamson as half the former Lakers took on the reigning champ Raptors in Jurassic Park as they all got blinged out like amber sap (also in a moving move giving a ring to their real Six Man, superfan Nav Bhatia). What the NBA had billed as a defending champs versus rookie for the new year match-up turned out to be quite a game anyway. Going all the way to O.T as Canada’s very own team showed they were still hot without their man Kawhi and still big, like they were soaring past the Rockets in Tokyo, Japan with a 130-122 win.

The Raptors clawed this bird without Kawhi and Zion’s road thanks to Pascal Siakam’s super 34 points, 18 rebounds, 5 assists and one block as he showed he could be the new superstar in this 6 God town. Freddy VanVleet also made his case with his own Shaq sized 34, as Lowry had 22 to go with Ibaka’s 13 against Ingram’s inspired 22 in a balanced attack from this New Orleans animal that was all about fight, not flight.

And what a game to begin a season we’re sure will be just as good…if not go big, or go home better.

The NBA is back and in the words of a last dance card retired Dwyane Wade, now punching in as a pundit in another social media overshared reaction…

I hope you’re sitting comfortably in your banana boat because this is going to be a hell of a ride.

In this article:Clippers, Featured, Lakers, NBA