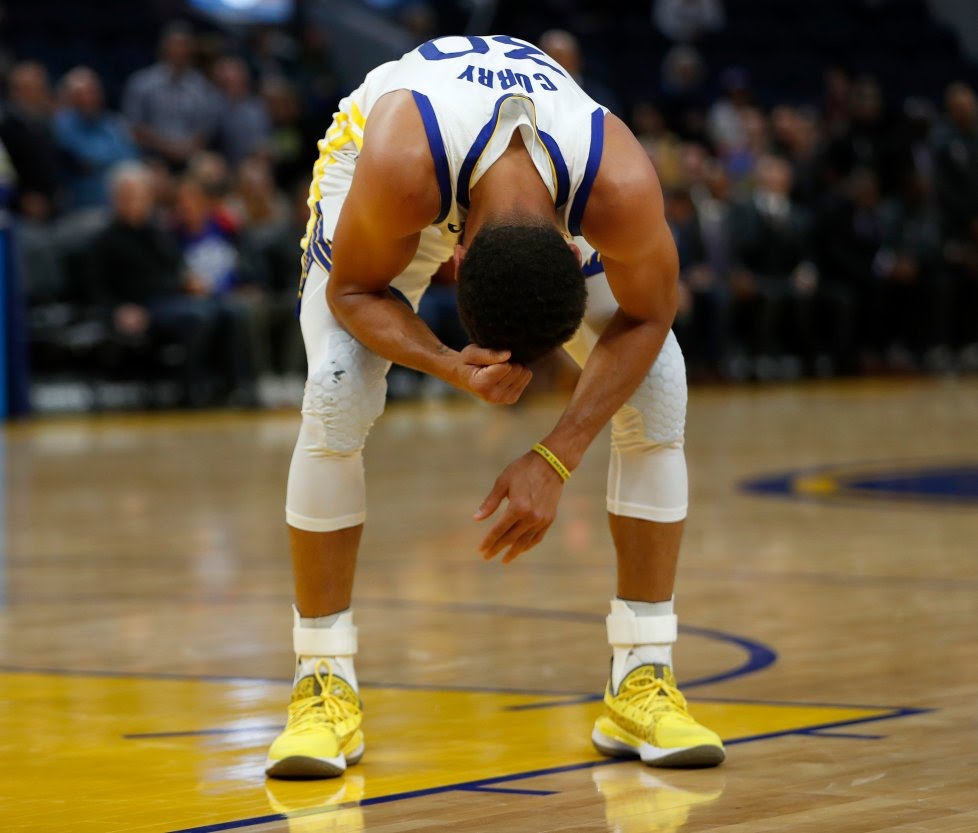 Hands up who celebrated Stephen Curry’s injury to his left?

Think you’re stand up? Keep your a## right there. You lose like the Toronto Raptors rightfully so for that game in the NBA Finals after they cheered for former Golden State Warrior Kevin Durant being taken out the game. Despite his unheralded heroics of actually even suiting up to play in a truly lose, lose situation. Limping to what’s further reason why he hasn’t returned yet this season as a Brooklyn Net with Kyrie…but just you wait.

Following losing Durant both to injury and free agency, not to mention Klay Thompson with a torn ACL for possibly the season too (but at least he re-upped), it really does come in threes now with Steph Curry out indeterminately as of press time but indefinitely with a broken hand.

But before all this the trolls declared open season on the Dubs after Golden State dropped more numbers than those girls in the club you thought your obnoxious behaviour like this went down well with. Calling it a death of a dynasty in Silicon Valley like they did the fellow California Kings out in L.A. after LeBron’s Lakers dropped their first game in their STAPLES home to the Los Angeles Kawhi neighbouring Clippers, as people jump off the Warriors bandwagon and on to the laughing Leonard one like that Tyrese ‘Fast and Furious’ 6′ scene meme. But hey, hey, hey look at them and Ant Davis 40 and 20 for three quarters now. Spare some change? Those type of wrote off comments are for bums. And it’s a bad note.

Never underestimate the heart of a champion or a true warrior, especially one like Curry and this is a LeBron/Laker fan writing this. Don’t you know it’s no Showtime without a Thompson (Mychal or his son) and now the Lakers failed to sign back D’Angelo Russell too as G.S.W. made a master move with the B.K. in letting go of K.D. there’s so much more that goes into being dubbed a dynasty. This was supposed to be the Warriors big year moving across the Golden Gate Bridge to a new golden state in the big market of San Francisco (although now it all looks like how ‘Godzilla’ and the ‘Planet Of The Apes’ left that iconic landmark), but still keeping the name unlike the Rick Barry tramline days of S.F. for The Town of Oakland. Putting on for the city like a Bay Area E-40, Al Attles and whole community behind Curry SLAM cover. This city never forgets like Fruitvale Station and neither does this franchise.

Most Lakers fans are still talking about being without Kuzma, Rondo and Cousins (who the Dubs were also without last season until his famous five appearance. Shooting the lights out in the Finals like it now looks like he’s taught former Pelican twin tower teammate A.D. reunited in Los Angeles as Lakers), even though they are winning. Imagine losing Boogie’s down low productions, Durant, Klay and now his Splash Brother too. No wonder they’re losing. But for all those talking s###, there’s still Draymond Green and just wait until D starts Loading. Remember what the third adopted splash sibling did in Brooklyn last year as a B.I.G. King of New York with a Coogie sweeter rainbow wet jumper that still shines, all notoriously on his own? You’re about to be in trouble as there’s still ice in his game. Check your veins.

So talk is cheap, especially this early in the 82 when Steve Kerr’s shooters still can afford more like when he had M.J.’s back in the golden era. And now signing Russell really does seem like even more of a master move with his stroke of genius. He’s already stepping up and so will his brothers Steph and Klay once it’s there day like Green’s once again. And these Warriors soldiers are deeper than you’d like to thing like this toddler of a young season, still learning how to walk, let alone dribble.

But that’s not the point right now. The point is prayers up for one of the God’s greatest and man of the lord, Stephen Curry who has never shown you NBA fans anything but love,l. So why all the hate? Like the video and GIF genius of Twitter rolling King Josiah as undefeated as the internet says, “We clown around on here but the one thing we don’t do is celebrate or wish injury on anyone… but ESPECIALLY GOAT level hoopers”, declaring all Warriors slander on hold until number 30 returns…and he’s a Laker LeBron fan too. One who probably saw Steph Curry’s wedding dance with Kyrie mocking the King’s workout playlist regime…now that was some funny ish.

Must Read:
United. The NBA Takes A Knee In Solidarity

But seriously here’s my two cents as a fan, why would you not want to see the G.O.A.T.’s of this game play or have the opportunity to see your team beat a champion at full strength? Otherwise it’s really just a W with an asterix, even more than a locked out Spurs…which really did count (and again that’s a Laker fan saying this). The small ball revolution originator, Steph Curry with a shot even better than Reggie Miller in the clutch or even basketball blasphemy aside Larry Bird (Laker fan people) is another Point Guard who changed the game like Magic or The Answer and like Kevin or Kawhi is even about to have them rewriting the top five with the history he’s making.

Without him. Without Klay, like Kevin you ‘aint beating the Golden State Warriors, you’re beating the San Francisco Footsoldiers.That’s not how you win. It’s not the same team and show respect without him it won’t be the same game. Without those hatin’ and celebratin’ tweets, it’ll just be another scroll through the social ether.

That’s just another timeline, his is history.

And it’s still being made.