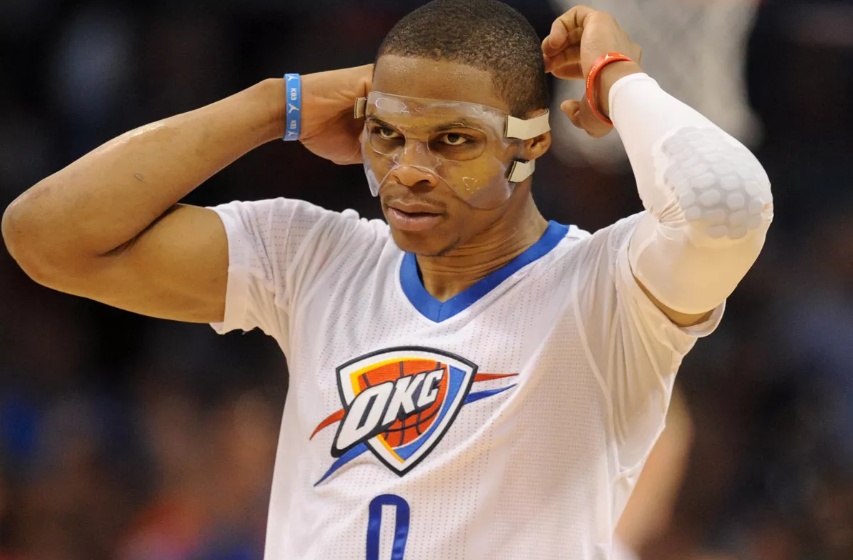 Face it! THAT’S how you come back from injury!

BasketballBuzz is out of the Canadian cold and into the Windy City this Thursday, checking out the Chicago Bulls hosting the Oklahoma City Thunder. But after an NBA elite injury list longer than a hotel laundry one recently, the excitement almost waned a little even for this league landmark game.

Another Derrick Rose season wilted to one knee was joined by new stampede star Jimmy Butler being out of service for another 4 to 6. If that wasn’t bad enough for this otherwise epic matchup of Kevin Durant and Pau Gasol proportions, last week Russell Westbrook went and fractured his face.

But still, like a LeBron or Kobe of the punctuated by pain performance of the past, Russell Westbrook has donned the Phantom of The Opera mask to shield his early curtain call return to court. Richard Hamilton may have finally hung up his face mask, saying ‘RIP’ to his career, but this kid isn’t giving up just yet. Even if his jersey reads as nothing is left, he’s giving it his all like there’s a 10 in front of it.

Like numbers? Then how’s a mind and box blowing 49, 16 and 10 for you? These are the dynamite explosions of points, rebounds and assists that have given this Thunder strike his fourth triple-double in a row. First, since Mike, matching the greatest of all-time and surely has the makings of an MVP. Chicago you have been warned.

This is the new epic, electrically charged stampede. Did you see that dunk as he beat the cheese out of Philly? With the Bane brutality of 300 men. Hoorah! Running the break like a runaway locomotive, station to station. End to end as he treated the rim like a teenage girl treats her daddy’s VISA. This guy accepts plastic. On his face and in yours. So dunk, drunk disrespectful.

Almost 50 on the same team as league-best Durant. With 16 rebounds for such a short guard. Oh and yes that is 10 assists if you want to call him selfish critics. Yes, you are reading right. Watch him wrong everybody hitting the high notes in his opera, wearing the phantom mask. A true menace in these star wars. An awakening force on both ends with a double light sabre, cutting through the opposition. GQ’s Bethlehem loves him. We know. He’s right. He’s God’s gift to hoops heaven.

The Windy City just won’t know what weather has hit them this unending Winter when the Thunder makes its way into town with its hammer of Thor. The man in the mask is about to take it to the iron.

Who said the Phantom Of The Opera is dead? He’s here! Somebody stop him!